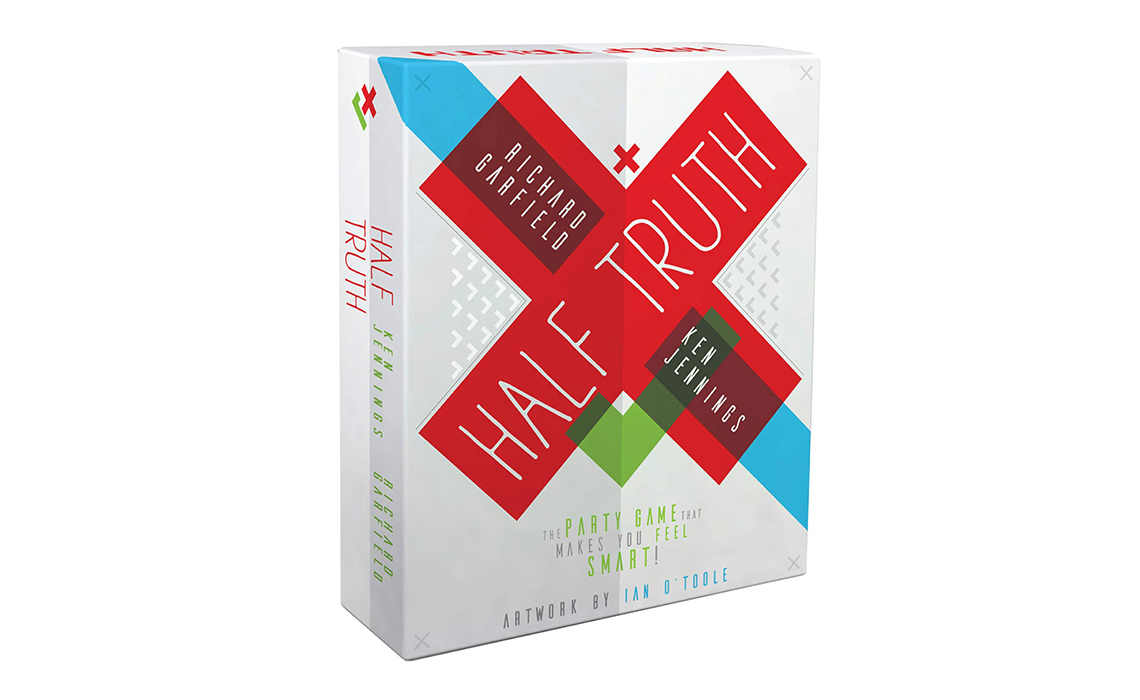 One of the entertaining transformations of recent times has been watching Studio71, one of the O.G. online-video companies, evolve from music manager spinoff to diversified media company–with, among other things, a substantial investment in publishing games, both electronic and tabletop. Studio71 had what looked like yet another surefire hit coming out this week, created by two of the biggest names in the geek pantheon.

And then the pandemic happened. For Half Truth, the trivia board game created by Ken Jennings and Richard Garfield, the strictures of lockdown sidelined key parts of its marketing plan and target audience. Now it faces a wholly more complicated prospect in the months ahead.

Studio71 got into the game business originally with mobile video games tied to Guava Juice, the kid-friendly Filipino influencer who is one of the most prominent of the company’s 600 or so management clients, another part of its business. As the initiative gained momentum under executive Javon Frazier (a friend and frequent part of panels I’ve moderated), Studio71 began reaching beyond its creator stable to other kinds of game-worthy, pre-marketed properties.

A board game built around video game series The Binding of Isaac became a hit, CEO Dan Weinstein told me. Since then, the focus has been on creating games built around any well-known brand, whether that “brand” is a client, a celebrity, or an existing property like Isaac that cross-pollinated from other media.

I love this approach; it’s a way for a company, even one with some capital like Studio71 (it is owned, after all, by the German broadcasting giant ProSieben), to prospect for new opportunities by seeing who cares enough to invest in supporting them. Kickstarter campaigns these days are more than just fundraisers. They test whether an audience is willing to invest in a new product, gathering a group of ambassadors with a sense of ownership and enhanced marketing reach, all while generating startup capital and presales to get the product out the door.

So, when it came time to back Half Truth, it seemed like a foolproof proposition. After all, the game was developed by two nerd-world deities: Jeopardy GOAT Jennings, the long-running game show’s No. 1 all-time winner, and Garfield, a legendary game designer best known for mega-hit Magic: The Gathering, one of the most popular tabletop games of all time.

Jennings, unsurprisingly, is a hardcore trivia geek who has authored several books on the subject. He could provide lots of question material. And Garfield could ensure balanced gameplay provided an accessible, enjoyable experience even for people who aren’t trivia royalty.

The game’s design, in fact, is carefully modulated to allow people who aren’t hardcore trivia buffs to compete relatively well against those who are, and to do it in an easy-to-learn, quick-to-play format. Each card features a trivia question with six possible answers, half of which are correct. Each player places chits on one to three answers that they believe are correct before the card is turned over.

There are bonus points for getting more than one answer correct, but if any of a player’s chosen answers is wrong, the player gets nothing. That adds a useful layer of risk-versus-reward that can pay off for a cautious and moderately knowledgable player. The player who accumulates the most points after three rounds wins.

Getting a kick out of Kickstarter

After a Kickstarter campaign in August attracted about $327,000 from nearly 8,900 backers, there was plenty of reason for optimism. The campaign hit its initial goal just three hours after launch. That’s a base you can build on.

And for a lot of people, including all those Kickstarter backers, Half Truth will still scratch an itch for low-key entertainment that very much still needs scratching.

“Really, the No. 1 thing helping the game is that a lot of people were going to go off the edge with one more jigsaw puzzle,” Jennings said, speaking perhaps only half in jest.

When I talked with Jennings and Garfield early in the pandemic, they just seemed relieved to get the project shipped to backers, and about to come out to a broader audience. “It feels great to get this game out at last,” said Garfield. “It’s been in the works for a long time. Every time I touched it and looked over the questions, I felt like it was something really special.”

Jennings, too, was exulting in a finished project. “It’s very exciting for us to have this peanut-butter-and-chocolate moment,” he said. “It was a lot of fun.”

The game, which was sent to Kickstarter backers a few weeks ago with a small pack of bonus question cards, debuted this week in retail stores. And that’s the challenge, Weinstein acknowledged to me during  a recent online webinar I did with him.

“There’s a couple of things to unpack in this,” he said. “Some of it’s particular to us. And some of this is is about board games in general. As one would imagine, manufacturing, shipping and distribution from China has been challenging, especially for a little guy like us.”

The company was able to procure and ship enough copies of Half Truth for all the backers, and to stock up with Amazon.

But other parts of the distribution plan are in tatters. The big-box chains such as Target and Walmart, Weinstein acknowledged, are busy stocking their shelves with toilet paper, food, and other staples. Adding a new game to their offerings is low on the priority list.

Good news! If you don’t have 2-6 players in your quarantine, you can still enjoy VIRTUAL HALF TRUTH! https://t.co/lxwk2Om1FA

And the situation is even more challenging for many of the specialty game shops that long have been an oasis of community and new game discovery for tabletop fans. Many have been forced to close or dramatically curtail operations, especially the kinds of communal game nights that bring in lots of potential buyers looking for new titles to try out. That traffic may eventually return, probably in spots and spurts, but it won’t be the ripe selling opportunity of a few months ago.

And there’s another challenge. Yes, if you happen to live in a household with two or three (or five, or six) adults who remember key portions of the past 20 or 30 years, the game is going to work very well.  It’s perfect for those game-night gatherings that were a standard part of many Millennial soirees.

But if you’re living alone, as many are, game nights are still a ways off. And if you’re cooped in a household with two or three children under the age of 12, this is no Chutes and Ladders. As even Garfield and Jennings acknowledge, this game, in its initial version, won’t work for the little ones. The questions cover a wide array of topics, from pop culture to sports to history and beyond, and don’t require particularly deep knowledge for an average and thoughtful player to be regularly competitive. But the Half Truth target audience is clearly the adults who might otherwise play Cards Against Humanity or Exploding Kittens.

Garfield, who has twins under the age of three, can’t even play with his own kids. So he’s acutely aware of top expansion priorities, should they get the chance to make Half Truth more whole.

“If the game gets played the way we hope it will, the first thing is more questions,” he said. “The questions are really fun, but they are exhaustible.” One potential expansion, he added, could be aimed at kids.

Now, bookstores–another possible sales venue–are reopening in California. Some lockdowns are being lifted, and people may eventually venture to each other’s homes. Chances are game nights start up sooner, by far, than movie theaters, sports stadiums, or major concert venues.

Even more promising is the potential for a Half Truth TV game show. With the Streaming Wars in full effect and two more major services about to launch, this could be a low-cost, high-visibility home run for some outlet. Unless the pandemic, or the looming recession, or a writer’s strike, or something, provides another Black Swan moment.

But it still marks another step forward in Studio71’s evolution. Weinstein said the company is developing a board game based on The Umbrella Academy, the hit comic book series by Gerard Way and Gabriel Ba that in turn became a hit on Netflix.

Asked to predict Half Truth‘s prospects, Weinstein could only say, “We don’t know. Is there an audience for it at the moment? Is it something that’s going to break through the clutter, or is it limited? Fortunately, we got wave one of Half Ttruth out and delivered into retail, into Amazon and wherever it needed to be, pre-the world shutting down. So we at least have the first run of it, and then we’ll see what what happens.”