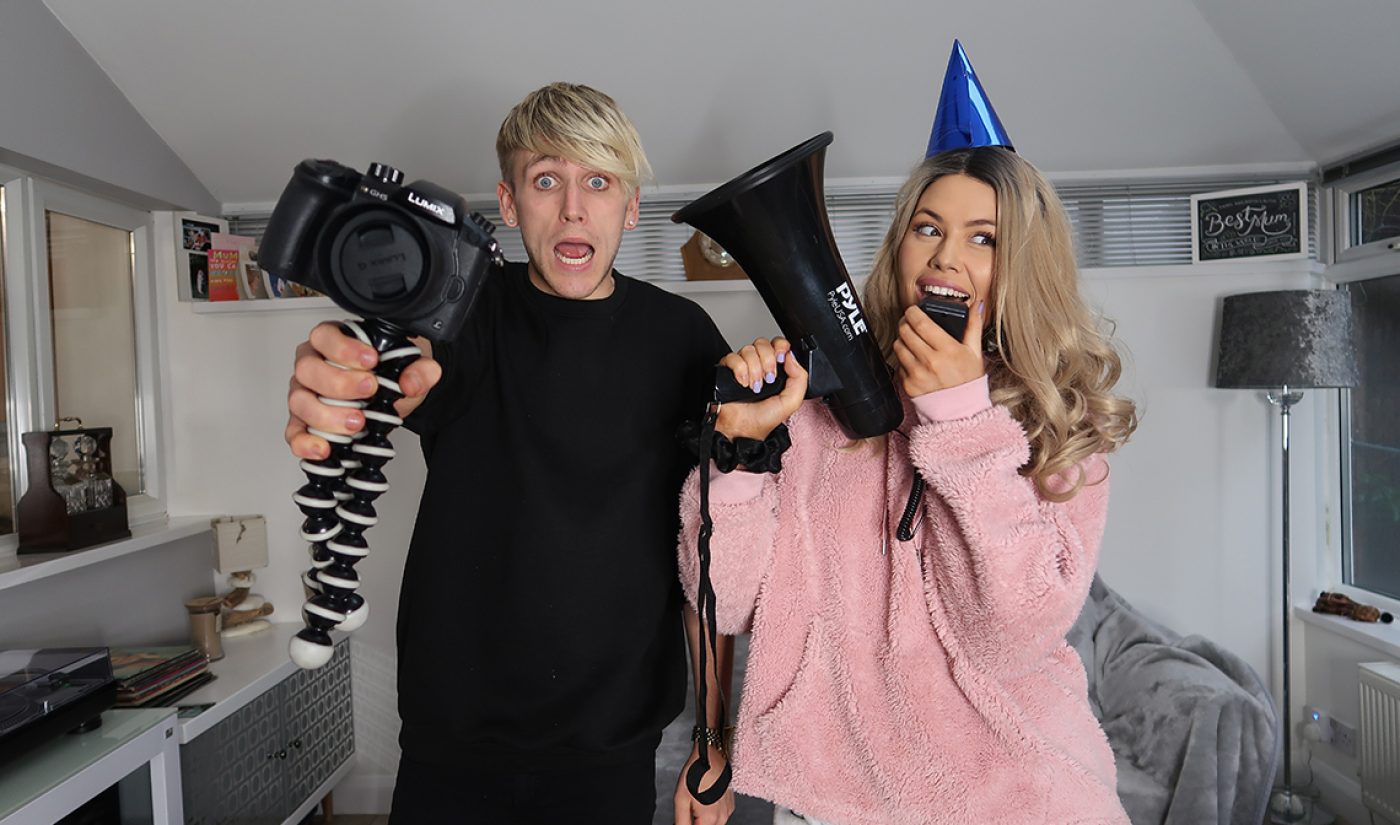 When Connor Darlington and Liana Brooker found TikTok, something just…clicked.

Both had tried their hand at other platforms–Darlington by uploading music covers to YouTube and Brooker by chronicling her fitness journey on Instagram–but while they each amassed nothing-to-sneeze-at followings (Darlington’s channel is currently at 12.3K subscribers, and Brooker has 153K followers) on those sites, they found it difficult to carve a place for their content.

Then, TikTok. Darlington originally joined Musical.ly and used it to reupload the song covers from his YouTube channel, “but nothing really happened until TikTok came around,” he says. When TikTok’s parent company Bytedance merged Musical.ly’s user base with TikTok’s, Darlington used his fresh start by taking a chance on comedy content. And it immediately paid off: His twist on the YouTube-born “Telling lies?” meme became so popular that TikTok turned it into an ad.

Brooker too found quick notability on the platform–though unintentionally. Her main social channel may have been Instagram, but she found TikTok through YouTube. One bad TikTok compilation led to another, and another, and then Brooker figured she should check the app out herself. Shortly after joining, she decided to make one video “as a joke, and to my surprise, it did very well,” she says. She switched her focus from Instagram to TikTok, and hasn’t looked back since.

All this happened before Darlington and Brooker met. Once they combined creative forces, “that’s when things really took off,” Brooker says. They began starring in one another’s content, and even returned to YouTube, where they staked out a shared spot with their couple channel Connor and Liana (364K subscribers).

Nowadays, they’re each over one million followers on TikTok. Well over, actually: Darlington has 3.2 million, and Brooker has 2.9 million. Creating daily TikTok content and weekly YouTube videos is a full-time job for both of them–and they wouldn’t have it any other way.

@lianajadeeStep on a crack….. did anyone else do this? 😂♬ original sound – lianajadee

Connor Darlington & Liana Brooker: We are extremely overwhelmed with how many loyal supporters we have gained on our journey so far. We don’t tend to worry about the number of followers, we just focus on making high-quality content for our audience to enjoy. There’s so many techniques to build big profiles with little engagement on TikTok, and it’s easy to get sucked into the trap where numbers are all you care about–but that doesn’t work in the long run, as no one sticks around. In our opinion, we have done what many struggle to do: build a following that we would consider family. We are so grateful for our supporters. Without them, we wouldn’t be where we are today. CLFAM for life.

CD: I truly believe that video creation is in my blood. I’ve been creating content for as long as I can remember, even if it was just silly videos I would present to my parents. It took a backseat for my teenage years whilst I worked in retail to fund my video/music projects. I would create in my bedroom whilst my friends were out partying. There was never a doubt in my mind that I was going to push for my dreams until they became reality. Being able to create amazing content that I enjoy not only takes away the whole “job factor,” but it also gives me a platform to share and spread positivity.

LB: I was just a young girl from Wales who always knew that she wanted to be in the social media scene, but I wasn’t too sure where I’d fit in. I started by sharing my fitness journey on Instagram whilst still working my 9-5 retail job, which didn’t really take me anywhere, but that didn’t stop me! I’d post every single day consistently, but nothing really took off until I found TikTok. One thing I’ve always been massively passionate about is spreading positivity and awareness about mental health, and I knew for a fact that these platforms would be the best way for me to inspire people.

CD: I was originally invited to an app called Musical.ly. I would reupload singing covers from my YouTube channel, but nothing really happened until TikTok came around. I decided to create some original comedy videos for a change, and they started doing very well. I quickly realised the power of this platform and was instantly addicted.

LB: I actually found out about TikTok through watching bad TikTok compilations on YouTube, and thought to myself…Why am I watching YouTube when I can download the app and watch the videos for myself? So that’s exactly what I did! After like a week in the app, I decided to make a video as a joke, and to my surprise, it did very well. That’s when I thought I should carry on with making videos, and that’s how I am where I am today.

CD: Things took off rather fast. I would create original comedy skits that my ever-growing audience LOVED. I would ask for suggestions on relatable situations and turn them into content. Everything was growing steadily until I created my most infamous video to date, Connor, Connor, which was my take on a popular trend at the time. It was loved so much that TikTok turned it into an advertising campaign to bring people onto the platform. This was my first introduction to “internet fame.” I’d hear people in the streets yelling “Connor, Connor” to grab my attention.

LB: To begin with, my followers did grow very steadily over time, but I feel like I grew a lot faster when I started finding my personality on the app. I began doing what I enjoy, which is singing, and I got my little niece involved, which I feel is what kick-started my profile. Even to this day, my audience LOVES cute videos. After I met Connor and we combined forces, that’s when things really took off.

CD & LB: Anyone and everyone can create content on TikTok and take off at any point. No matter the interests, there’s something for you. The only downfall is it doesn’t monetise content for creators, which is strange, as it is one of the fastest-growing apps currently available, purely because of its creators.

CD & LB: We work a lot with brands on campaigns with our agency. From music artists to film companies, we are offered all sorts of things. This is a massive part of our growth on the platform, as it helps us monetize in a way TikTok itself doesn’t allow.

CD & LB: Right now, social media is our job. It’s how we earn our way, and it’s what we love to do. We spend all day, every day coming up with fresh ideas and executing them in original ways. There’s a lot of “trends” on the platform, which many get involved in, but we like to be original, and feel that’s played a big part in our success.

CD & LB: No one in particular; however, we definitely take inspiration from some videos and make them our own.

@lianajadeeHas this happened to anyone else? 😂 // @connor //♬ original sound – lianajadee

Tubefilter: Have you faced any challenges (or, conversely, have you experienced any unique joys!) as a content-creating couple?

CD & LB: We’ve faced many challenges over the last year. We were both working full-time jobs in retail whilst we lived almost four hours apart, meaning we would have to create as much content as possible when seeing each other. This was not going to stop us. We knew what we wanted, and we were going to get it. After a discussion on our future, we decided there was no other option than jumping in the deep end and moving in together, which meant sleeping on an airbed in my parents’ back-garden shed for three months. We eventually both left our jobs in retail and went full-time in social media. This turned out to be the best decision we ever made. By joining forces, we became “TikTok’s POWER COUPLE” (as described by TikTok U.K.), and took the medal for second fastest-growing U.K. YouTube channel in 2019, just behind Strictly Come Dancing star Dianne Buswell.

We both work extremely hard, mostly 16-hour days, but are both extremely happy doing so. We wouldn’t be here without our amazing audience, the CLFAM–they are the most beautiful and supportive people. We can’t leave the house without taking pictures, and we LOVE doing so every single time.

CD & LB: Keep doing what we love. To us, this doesn’t feel like a job because we have so much fun. If anything, just keep growing and creating amazing content for our amazing audience.