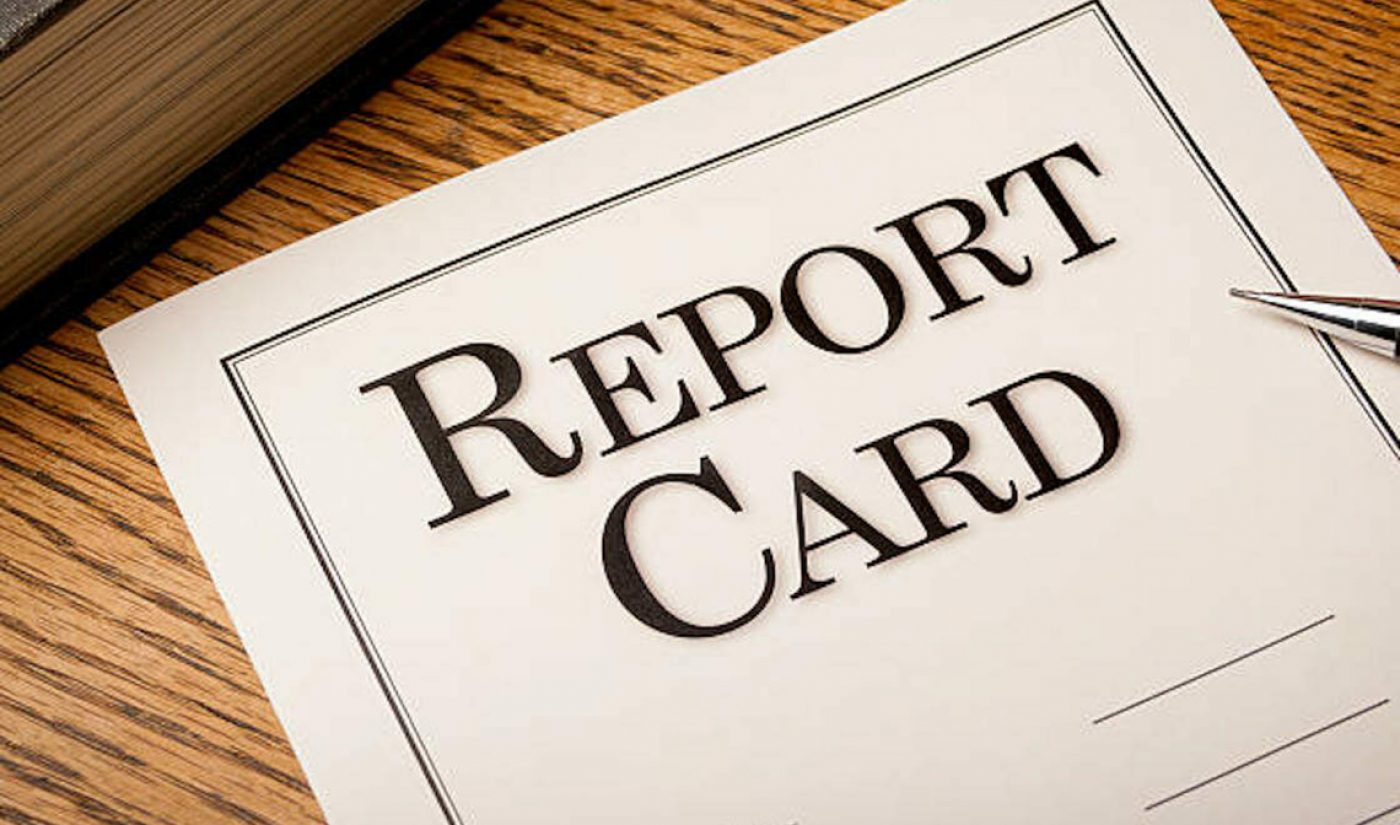 Six weeks into the pandemic lockdown phase of the Streaming Wars, we’re starting to see some winners and losers. It may seem early, but it’s time to hand out grades to the streaming services after this first round of big tests.

And while I hate to spend too much time on horse races, especially when each “horse” is running a very different kind of race, which horses we decide to ride during this extraordinary time will matter. Many of us likely will set in place viewing habits and brand loyalties that could last for years to come.

More generally, we’re finding out a lot about companies such as Amazon/Instacart, Facebook, Zoom, Postmates/DoorDash/Grubhub, and HelloFresh/Blue Apron, (not to mention our political system), as they show whether they have the resilience, resources, ingenuity, and scale to do what we need them to do.

This is also a chance for streaming video companies to show if they can do what we need them to do in this time, namely deliver a range of entertaining programming reliably for months. We have lots of time at home to comparison shop, making this extraordinary moment both a massive opportunity and a huge vulnerability for streamers. So, how are they doing in their first “mid-term”? Here are my grades:

Grading on the Curve

Netflix: Hard to hash on the world leader, which reported Q1 numbers that were a) gigantic and b) about what you’d expect when much of the planet shut down and started looking for things to watch. Also hard to complain about nearly 16 million new subscribers (they’re now past 180 million worldwide). Netflix has grabbed the biggest share of streaming video views, and even helped Europe ease crushing demands on its Internet bandwidth by voluntarily reducing image quality there. Programming has been hot too. Ozark‘s latest season became a buzzy online topic, as did reality show Too Hot To Handle. And fan expectations are high for Space Force, a new workplace comedy (more or less) starring Steve Carrell.

Importantly, even with film and video production on hold worldwide, company execs said they have enough content stacked up already to last pretty much the rest of the year. That deep well of shows will be a vital differentiator as other services, especially new ones, run dry amid the worldwide halt to production. The downside, though, is someone has to pay for it. Once again, Netflix is issuing more bonds to finance “content acquisition, production and development.” This time, it’s another $1 billion atop an already gargantuan pile o’ debt. For that, Netflix’s grade is A-.

Hulu: For a long time, Hulu was a neglected mess, tugged endlessly between multiple owners and strategies. It had Emmy-winning The Handmaid’s Tale to hang its hat on, but few originals left paying subscribers to pick through back episodes of network TV, hardly a recipe for a must-watch network. Now, however, Hulu is starting to show the benefits of Disney’s acquisition and attention. Its shift to become the Not Disney+ antidote to that service’s gooey kid-friendly goodness will appeal to a different crowd, as intended. More importantly, the launch of a dedicated FX on Hulu channel brilliantly imposes a programming vision and edge on Hulu’s rather baggy and shapeless image. Buzzy shows such as Devs and Mrs. America are making the case for Hulu as a source for more than network sitcom re-runs. I look forward to seeing what else they’ll do. Grade: B+

Amazon Prime: The company rolled out several impressive new shows or seasons of existing shows at just the right time. I’m wading through a couple of intriguing sci-fi programs, and it seems like Amazon Prime Video has more good stuff than perhaps ever. The bad news: the reason everyone gets Amazon Prime is because we want the stuff we want shipped for free two days after we order it. That’s not happening, thanks to the pandemic’s overwhelming impacts. I can’t help wondering if unhappiness about Amazon’s ability to literally deliver on its promises will render moot the good work done by Prime Studios. Grade: B

Quibi: It’s not fair to compare the 1.7 million downloads Quibi managed in its first week to the 10 million that Disney+ pulled off five months earlier. For one thing, Disney is, well, Disney. And Disney frontloaded its subscription numbers with deals for its ardent army of fans, guaranteeing a splashy debut. It’s also not Quibi’s fault that its planned marketing campaign came out as the world turned upside down. Not only did the pandemic soak up news coverage, it wiped out potentially vital marketing channels, such as signs on buses and subways targeting commuters, a crucial audience for the company’s stated use case.

On the other hand, Quibi arrived just as its big differentiator–mobile-only episodic video from prominent creators–mutated into a lethal limitation. Viewers weren’t commuting. They were stuck at home. They wanted to watch longer shows on bigger screens, for much longer periods. Quibi didn’t even allow users to “throw” their mobile video to those bigger screens. Nor did they allow users to  share images and GIFs from the shows. That self-inflicted wound hobbled any possible organic buzz.

One bit of good news: the company announced this week that it will allow shows to be viewed on TVs sometime next month. More pivots like that are still needed if it’s going be able to adapt to new audience expectations. The bigger challenge may be programming. Too few Quibi shows are creating conversation. There’s no The Mandalorian here, or even The Morning Show. That’s probably unfair to a newcomer without a giant corporation behind it, but who said life is fair, especially now? Grade: D+

HBO Max: We finally have a date for HBO Max’s debut, May 27, but boy, does that sound like eons from now as the pandemic grinds on. And for owner AT&T, it can’t arrive soon enough. The pandemic pounded both WarnerMedia and its media-delivery networks (DirecTV and U-verse are down almost 17% from a year ago, while its skinny bundle AT&T Now lost another 138,000 customers in the quarter). Amid all this, offering an SVOD service featuring the much-loved HBO shows, plus some other odds and ends, is something. But most of the originals that were slated for HBO Max are being delayed. That leaves endless reruns of Friends, which will make some set of not-very-adventurous people happy. Just not me. Grade: Incomplete

Peacock: You’d think for a service named after a bird known for ostentatious display, Peacock might be a little noisier in its partial rollout this past week. But it was pretty much as quiet as could be. What launched is plenty of free programming, some 7,500 hours’ worth, for those already paying for Comcast’s Xfinity service. The big launch was supposed to be in three months, on July 15. Now, even that may be constrained by COVID-19’s aftereffects. Among other headaches, Comcast’s NBC unit was going to create thrice-daily updates for Peacock from the Summer Olympics in Tokyo, along with hundreds of hours of exclusive programming. The Olympics were supposed to start nine days after Peacock fully unfurled its feathers. Now the Olympics won’t happen until 2021. Will it take that long for Peacock to matter? There is some good news for obsessive show completists: as with HBO Max, Peacock will have complete catalogs of some beloved comedies, including The Office. Given the quiet launch and limited access (less than one-fifth of Americans can see it for now), we’re not flipping the bird at Peacock, but it hasn’t given any reason to preen either. Wake me up in July. Grade: C+

Apple TV+: Apple has done a lot of things right during the pandemic, moving very early and quickly to shut and shuffle its vast operations in China and the U.S., contributing protective equipment and devices, and donating to relief funds. It’s also rolled out a string of new products, like an excellent MacBook Air, a refreshed iPad Pro, and a recession-ready successor to its popular iPhone SE. At $399 but using many of the chips that power far more expensive models, the 2nd Generation SE promises to sell a lot of units. Apple also is launching iCloud, Music, and other big services in several new countries.

What’s that you say? What about Apple TV+? Funny you should ask. It’s practically disappeared. Oh, they’ve rolled out a few well-made originals (Steven Spielberg’s Amazing Stories lives up to its name, for instance). But there’s not enough here  to keep customers happy by itself. On the other hand, figuring out which shows on Apple TV are part of TV+ and which come from other providers is nearly impossible, and that’s on purpose. And remember that all the people who buy those new MacBook Airs, iPad Pros, and iPhone SEs will get a free year of TV+. They may actually even watch sometimes. For that matter, if Apple really cared about building a deep TV+ library, it already would have bought MGM‘s 4,000 movies and 10,000 hours of TV. So far, no check. Grade: a gentleman’s C.

Disney+: With great power comes great responsibility, intoned the late sage Stan Lee. Disney+ is benefitting, as expected, from young children’s ability to watch the same animated episode or classic movie in its library over and over and over. That’s put the network in the top five of all channels during the pandemic, according to a couple of tracking services I’ve seen. Good thing too, because Disney+ shows for older humans have quickly been exhausted (unless you’re the sort who watches the same Star Wars or Marvel episode or movie over and over and over).

When Disney+ launched, the company frontloaded its movie slate and shifted its best shows from its networks to get a fast start. Some 50 million subs later, it’s safe to say that bet paid off. But these days, there’s not much new on the channel, beyond nature docs and behind-the-scenes programming that soothes only hardcore fans. With the pandemic hitting much of the rest of Disney (tentpole film releases, parks, resorts, cruise lines, ESPN live sports, network ad revenues), the streaming service remains a bright spot. But if production stays shut for months more, will that continue to be the case? Grade: A-

Tubi: The big AVOD service had a pretty great couple of weeks. Fox closed its $440 million acquisition of Tubi, a very nice exit for the streaming service after most of a decade of independent operation. It’s also the biggest price fetched for any ad-supported VOD service during a hot stretch of acquisitions. Downside: they’re joining Fox just as it announced pay cuts for all VP-level executives and up. But the buy means Tubi immediately becomes one of the most-watched corners of Fox. It may even attract an outsized amount of advertising from traditional TV, especially with marketing room freed up by now-cancelled sporting events.

My prediction: if those dollars start landing at Tubi and AVOD competitors such as Pluto and Xumo, they’re probably not going back. Grade: A