TikTok Millionaires: Steven Mckell Wants Fans To “Be The Free You” By Embracing Body Positivity, Self-Confidence 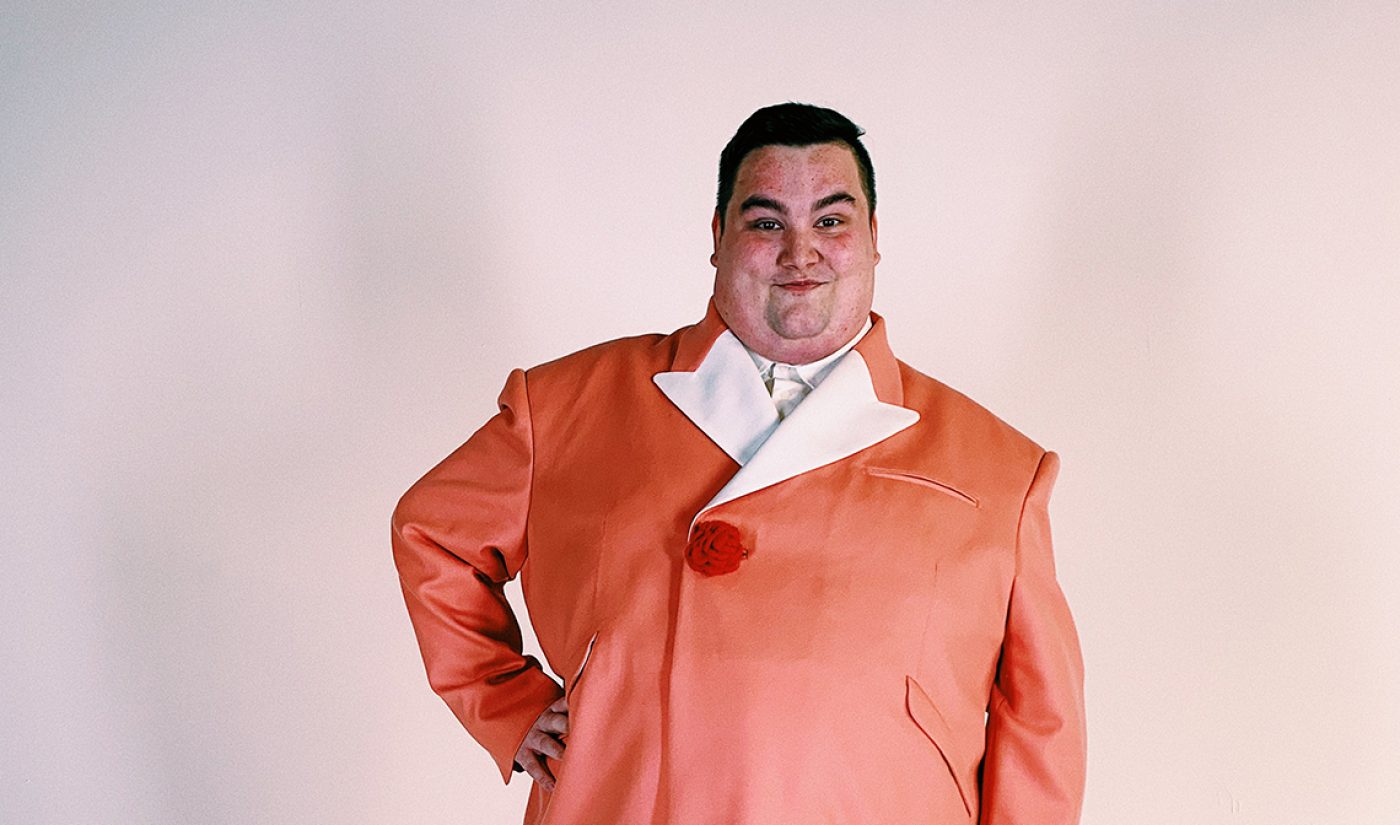 Steven Mckell has found freedom in the public eye.

Some might find it intimidating to have their every move (dance and otherwise) seen by more than two million TikTok users. But for theater major Mckell, the app has become a stage he can step onto anytime, from pretty much anywhere–and he’s using that stage as a means to both entertain and encourage his fans to embrace themselves for who they are.

Much of Mckell’s platform centers on supporting fellow plus-size men, as well as folks of all sizes who struggle to stay positive about their bodies or mental health. His longtime motto for his audience–nicknamed the Sassy Squad–is “be the free you,” and it’s a message Mckell had a couple of years to zero in on. He first joined Musical.ly back in 2015, and wasn’t an instant hit—something he ultimately considers a positive, since it made him work to develop his content niche, he says.

Things began to change for Mckell when Bytedance bought Musical.ly and merged it into TikTok. He first hit the app’s #foryou page (the core feed of content users see when they log in, and the main vehicle through which creators find new viewers) in late 2018, with a comedic video that put his acting chops front and center. We’ll let him tell you more about said video below, but will reveal that it took him from 175K followers to 500K in less than a month.

Mckell now sits at 2 million followers, and his videos have received more than 46 million likes. He attributes his success in growing his audience to one thing: just being himself, on a platform where that’s what users like to see from creators.

“Viewers like to see people they can relate with on a human level,” he says, “and TikTok gives you that.”

Check out our chat with him right here:

Steven Mckell: Hitting one million was crazy! I didn’t ever think I would get to that number. I’m at 2 million now, and it still feels like a dream! I feel incredibly lucky and grateful. My fans (the Sassy Squad) are genuinely the most supportive, caring, and genuine people ever! I want them to always know I love them and that they are the reason I’m still making content!!

SM: I’m from bonnie auld Scotland–Fife, to be more specific! I love to make people laugh whenever I can, whether that’s with a joke, my personality, or just pure sass. Before TikTok, I studied acting at college and got my diploma. I didn’t have an outlet for my creativity, but I always aspired to make others laugh. Jobwise, I worked in various call centres taking all kinds of calls. It’s not the best job, but the people I worked with really made it bearable!

SM: My friend LJ Cleave posted about it on her Facebook at the end of 2015, and by June 2016, I was fully hooked–so shout-out to LJ! I started posting videos because it was fun and easy to do. I noticed there wasn’t anyone like me really in the creator world, not in the U.K., anyway! I wanted to have fun and inspire people, and that hasn’t changed nearly four years later.

SM: I won’t lie, I was on the platform for two years before I found any kind of hype or #foryou success. But I feel that helped because it allowed me to build my content up and figure out who I am as a creator! It made me work hard and put in the effort, which a lot of creators today don’t have to do or understand.

My first big video was in March 2018. It was me literally just being such a weirdo and making strange faces to this song, but people loved it! if you are on TikTok and have seen a video of mine, it’s probably the lip challenge or me doing the muffin song…or acting out the Mrs. Trunchbull scene from Matilda!! I know…strange! Those two came towards the end of 2018, and I went from 175K followers to 500K in less than a month, which back then was cray cray! My Trunchbull one was only a few months ago, and everyone always mentions it to me when they meet me.

SM: TikTok is the only platform where being completely authentic is celebrated and supported, in my opinion. People are drawn to TikTok because it’s so fun and enjoyable to watch! Once you have watched them for a while, you then start to make content yourself, and before you know, it you are doing all the trends and dances like everyone else. Viewers like to see people they can relate with on a human level, and TikTok gives you that. Its ability to be able to cater to all ages, groups, and creators makes it unique compared to any other app out there.

SM: I’ve been lucky enough to attend events where us creators can come together and make loads of content. Unlike other platforms where it might take hours to film and edit just one video, we can produce 50 between us in one day! I’ve loved making content with creators like @lucy_tara, @midgegee, @dj_rangster, @morganmjames, @dillonk, and @itzshauni, they are all amazing! In terms of brands, I really love collaborating with artists. One of my favourites was Maisie Williams and her song “Stay Young”–it was one of my first proper collaborations, where a few creators and I really came together and made a cool video to the song. We all helped one another and gave each other suggestions for what to put into the video, which is why it was so much fun! There have been many more, but that’s always a fav of mine.

SM: TikTok is such a massive part of my life! Every day, I make content and plan out videos. I do a lot of original content, so I need to plan everything out. Sometimes my family gets involved, and it’s such a great moment to share. I spend hours every day filming, editing, and brainstorming! It’s not as easy as people think, but it’s a lot of fun and I am grateful I get to do it. If I’m not dancing in public or dressing up as seven different characters for a video, then I’m usually singing (BADLY MIGHT I ADD) or writing! I’m halfway through a novel at the moment. It’s been five years, so yeah…it’s finally progressing! I love to spend as much time with my family as I can. I’m also a huge horror movie addict, I LIVE FOR THE THRILL!

SM: Ohhh so many! All of the above I mentioned before! But here are a few who currently inspire me: @brittany_broski is HILARIOUS, @gorg.on is so fierce and I love his content, @ktfranklin literally has me always vibing with her content, she’s so natural in front of the camera. Katie and I are very similar in terms of content and how we handle ourselves as creators. There are so many more, but that’s just a few.

Tubefilter: As you mentioned, you originally got your start on Musical.ly back in 2015/2016. What was the transition like from Musical.ly to TikTok? Did you have to rebuild your audience, or did you notice a lot of people also made the move?

SM: Ahhh the old days!! I like to joke with the newer creators that I walked so they could run, which is not true at all…or is it, hmmm? Of course I’m not being serious. I think the transition was very smooth! It was on TikTok that I really blew up. I remember not long after the merge, TikTok reached out to a lot of creators to help them out, and now they do that with smaller creators, which I think is so important!

TikTok moving over to a variety of original content creation made it better for me! The big creators who didn’t like the change left, then tried to come back…but I believe that TikTok gave more people the opportunity to grow and become big on the app. I certainly noticed that everyone stepped up their game and went with the flow. You have to, really, because social media is like fashion: one day you’re in and the next day you can be out, so you have to work hard and stay relevant.

Tubefilter: One of the key things about your platform is that you urge your fans to be true to themselves, be body-positive, and be conscious about mental health. Why is this so importnat to you?

SM: I really want anyone who watches my content or follows what I’m doing to just “be the free you.” I know it’s easier said than done–believe me, I know the struggle! But I want people to love themselves. It’s not just about your size, etc, it’s in all aspects of who you are! I tell people every day to get up and when you see yourself in the mirror, say, “You are amazing, you’ve got this.” Cringe, I know, but do it! After a while, you will believe in yourself. Being true to who you are can really help your mental health. In a time right now when mental health, body positivity, and self-confidence are such taboo subjects, I want to break down those taboos and get people talking about it. I’m just a wee bit passionate about that!

SM: This year went off with a great start. I did Fashion Week, which was INSANE! I am hoping to become a public figure who celebrates plus-size men, because there are so many of us out there and it needs to change. I also want to work on breaking into the entertainment industry on TV. I want to be able to inspire people on as many platforms as I can.