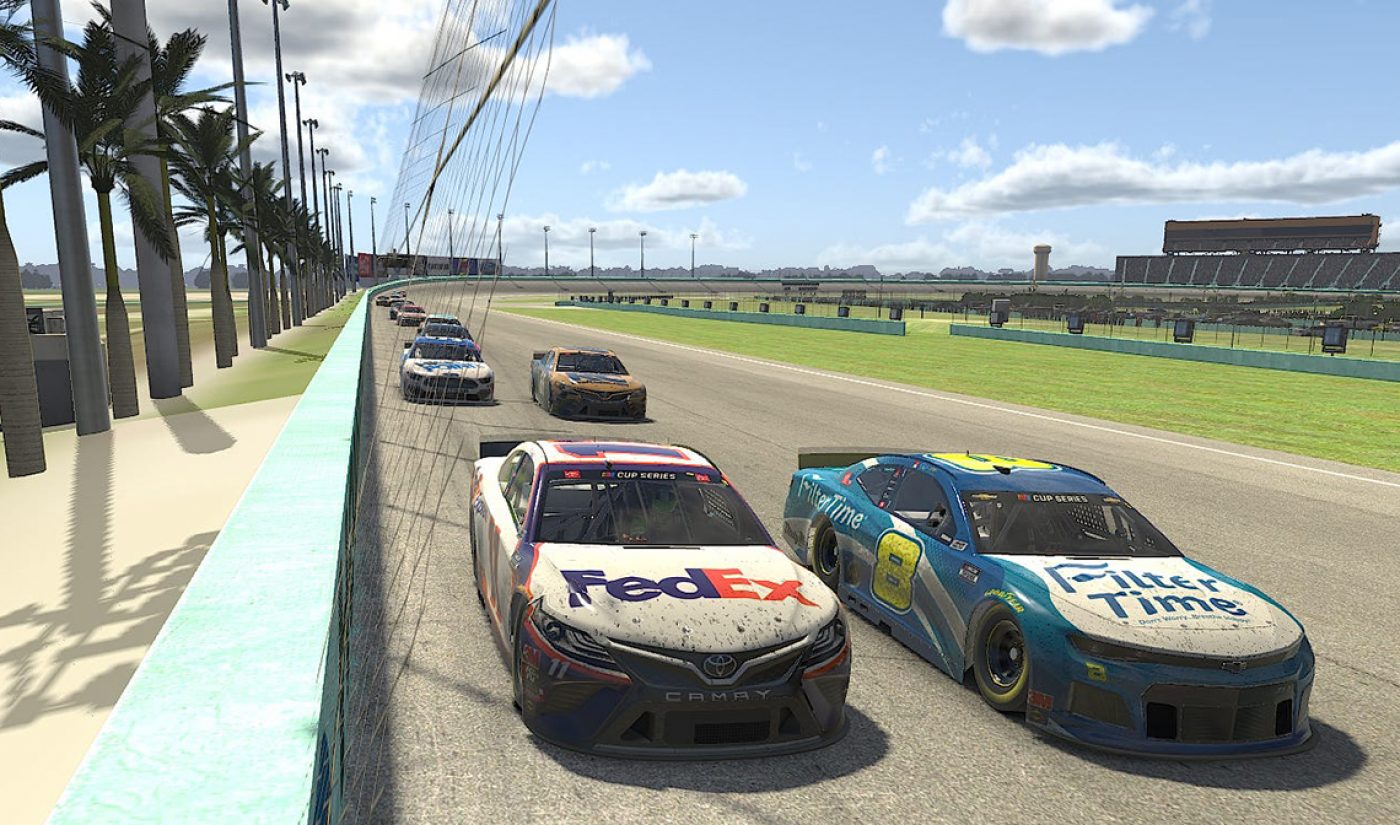 Esports has a new lap leader.

Like many other organizations, stock car racing league NASCAR has altered its upcoming events in response to the COVID-19 pandemic. But instead of cancelling races altogether, NASCAR chose to take them virtual.

This past weekend, it held the first eNASCAR Pro Invitational iRacing Series race by putting top real-life drivers like Denny Hamlin, Dale Earnhardt, Jr., and Bobby Labonte inside simulated racecars. Racers weren’t expected to suddenly learn how to handle a PC keyboard and mouse combo or an Xbox controller; instead, their homes were set up with control kits including real steering wheels, gas/brake pedals, and giant displays mimicking the width of a car windshield.

Because NASCAR’s scheduled race was supposed to take place at Homestead-Miami Speedway, drivers competed on a virtual version of the track within iRacing, a hyperrealistic video game with graphics that look almost exactly like a real-life race.

The race was aired by Fox’s paid sports channel FS1, and drew 903,000 viewers–a figure that makes it the most-watched esports program ever aired on TV, according to data from Nielsen. (The most-watched crown was previously worn by a 2016 Mortal Kombat event that aired on Cartoon Network and drew 770,000 viewers.) Some racers also livestreamed their perspectives of the race on Twitch, NASCAR SVP and chief digital officer Tim Clark told NBC Sports.

To put things in context, the first nine races in NASCAR’s 2019 season brought an average of 3.45 million viewers each, down 38% from viewership netted by 2015 season races. Also worth noting: NASCAR races usually air on regular cable TV networks rather than paid networks, so FS1’s paywall may have affected the virtual race’s number of viewers.

Based on the record-setting viewership it did get, though, Fox Sports has agreed to air the rest of the iRacing Pro Invitational Series season on its regular broadcast channel as well as FS1 and in the Fox Sports app, per Engadget.

Clark told NBC that NASCAR intends to keep its planned race schedule, just virtually, through at least May 3. The next race will take place at 1 p.m. March 29, with drivers competing on a virtual Texas Motor Speedway. Other upcoming races will take place at virtual versions of Bristol Motor Speedway, Richmond Raceway, Talladega Superspeedway, and Dover International Speedway.

He added that NASCAR is looking at drivers’ Twitch streams and fans’ reactions to them for ways to tweak its own future broadcasts of iRacing events, including adding more individual shots of drivers behind the wheel and voice communications, perhaps to replace the usual chatter between racers and their pit crews.

These races are ways for NASCAR and Formula 1 to stay connected to fans during what would normally be some of their top events of the year. But they’re also signs that traditional sports organizations are recognizing the value of esports.

Traditional sports have been seeing a steady TV viewership dropoff for years, as evidenced by NASCAR’s 38% drop from 2015 to 2019. But a number of major sports leagues, like Formula 1, have their own video games–such as NBA 2K and Madden–that draw massive viewership for creators on platforms like YouTube and Twitch. Organizations like Major League Baseball have pursued those digital viewers by partnering with platforms to air matches, but esports leagues are doing the same thing, and over the past year or so, their viewership has risen to come near competing with trad sports’.

Whether or not the MLB, NBA, or NFL follow in their tracks, NASCAR and Formula 1 taking their races virtual means much more mesh between the traditional and esports worlds–something that may continue even after the pandemic ends.