Amid A Sudden Gold Rush, Is Podcasting’s Market “Anyone With Ears?” 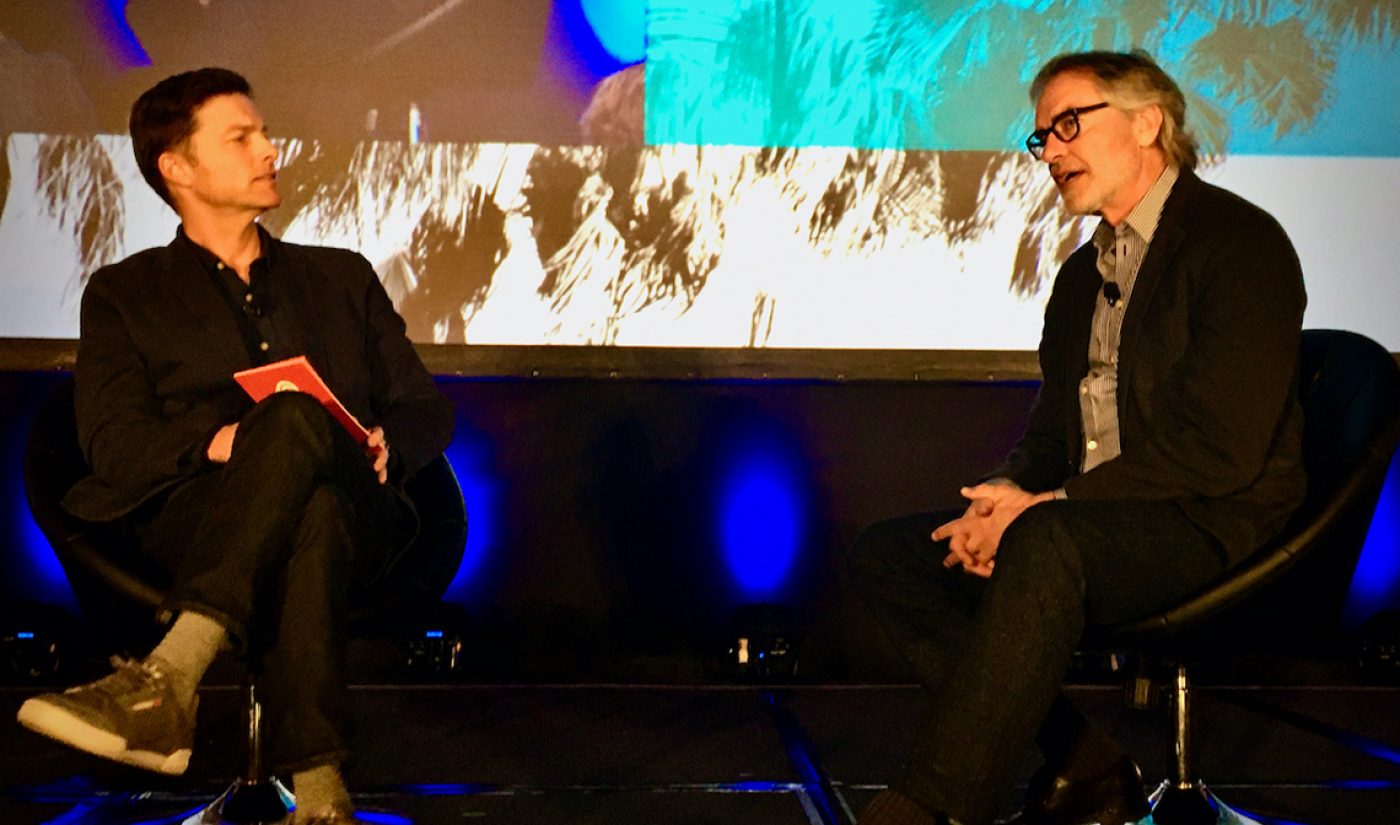 It’s been a great couple of weeks for the burgeoning business of podcasting. Big deals, a big conference, big talk from the guy heading the biggest podcasting (and traditional radio) network of all.

The very good news is that there’s lots to brag about for a business that hopes to get even bigger while actually making money. The question is whether podcasting is finally about to take off for good, after years of bubbling along at the edges of the cultural radar.

An increasingly solid case can be made for that proposition. And the last two weeks stacked up several exhibits further bolstering the argument.

Most notably, Spotify bought Bill Simmons’ podcast-driven media company, The Ringer, for a price that CEO Daniel Ek said could reach $196 million, depending on earn-out provisions.

That’s a lot of money for a guy who likes to luxuriate in deep dives on the best Boston Celtics lineup ever, but in Simmons’ defense, he’s dramatically expanded his and his company’s areas of focus since ESPN hired the guy behind “The Boston Sports Guy” nearly two decades ago.

It was Spotify’s fourth podcast-related acquisition in about a year (including that of Anchor, which hosts and syndicates my Bloom in Tech podcast across 10 platforms), for amounts totaling nearly $600 million. It’s part of a strategy by the streaming-music giant to gain control over audio content that doesn’t require it to sign a hefty licensing check to music-licensing organizations.

Not incidentally, having exclusive podcasts from Simmons and other acquisitions gets people habituated to using Spotify for all their audio entertainment needs. That can be a useful habit when trying to differentiate from Apple Music and other competitors.

“The trend that we’re investing in is that radio is moving online,” Ek said. “What we really did with The Ringer, I think, is we bought the next ESPN.”

And yes, maybe he did. The Ringer brings lots of deep geek-talk about sports and pop culture, and it’s quite entertaining for those of us into those sorts of things. (Simmons’ recent conversation with fellow DIY media mogul Ben Thompson of Stratechery is pretty awesome.) But even without all the actual games on ESPN, The Ringer brings all the other stuff that fans love about sports, and that can be worth quite a lot.

The same week, iHeart Media announced it would expand its Spanish-language podcast offerings, with a slate of new shows from its own iHeartLatino chairman and chief creative officer, and a separate broad-ranging deal with digital-content company reVOLVER.

“We need diverse voices,” said Bob Pittman, CEO of iHeart, whose holdings include the biggest U.S. podcast network and who is himself a podcaster.

Diversity’s a great idea, especially for a medium that’s custom-built to provide a bewildering amount of diverse and highly focused programming. Kudos to iHeart for investing there, though I’m guessing plenty of podcasters are  already there ahead of them.

Getting Sirius About Podcasts

SiriusXM announced its version of a streaming audio deal the same day as iHeart, investing $75 million in SoundCloud and its massive collection of user-created audio, which includes lots of up-and-coming bands and some podcasters (which included me, in the past).

Combined with SiriusXM’s previous Pandora purchase, it’s clear the satellite radio company wants to move beyond the shrinking market its main business allows. Good idea. The next step might be to broaden the ways it distributes the subscription programming it already beams to about 35 million subscribers. Sirius could cobble together a pretty serious podcasting network with its exclusive programming, but would need to figure new business models to make it all pencil out.

Nielsen’s recent Streaming Wars report suggests that a significant opportunity exists for more audio, especially subscription audio like Sirius, Audible, Spotify, and Apple Music. Already, nearly two-thirds of those whom Nielsen surveyed have at least one streaming audio subscription (a number that’s even higher in younger demographics), and more than half said they pay for two audio subscriptions.

Those subscriptions are likely not just about music, given that all the big services have most of the same 60 million licensed tracks. Podcasts, like audiobooks, create the potential for unique content outside of music’s limited opportunities for exclusives.

Streaming audio differs significantly from streaming video in one key way, Nielsen noted. More people expect it to be free, thanks to a century of listening to ad-supported free radio broadcasts.

iHeart’s Pittman formerly ran MTV and AOL when it was fun to run them. These days, he’s so bullish about podcasting, another entertainment medium on the rise, that he has his own podcast, Math & Magic: Stories from the Frontiers of Marketing.

“I think the sky’s the limit for podcasting,” Pittman said at this month’s Podcast Movement Evolutions conference in Los Angeles. “As an industry, we need to keep investing in it so it can reach its full potential.”

Pittman said 92% of Americans listen to broadcast radio at least once a week. Add in the streaming music services, audiobook services, and podcasts, and nearly everybody is listening to audio in one form or another.

The market for podcasts is “anyone with ears,” Pittman said. “The consumer has really run out of time with their eyes. Audio is the beneficiary of all this.”

Plenty of people at the conference were looking to cash in, either as creators or as the companies helping those creators. It’s the idea of selling picks and shovels to miners, rather than trying your own hand at the mining.

Among those I talked with was Jason Sew Hoy, whose own ancestor learned that lesson working the gold fields of California, Canada, and Australia before opening a mining-supply store in New Zealand. Now, Sew Hoy is the just-announced CEO of Supercast, which helps podcasters work this new gold rush by transitioning their business model from free to freemium with a layer of subscriber-only services. On Tuesday, the company announced $2 million in seed funding, spinning out of Canada-based Tiny Capital with backers who include a string of prominent podcasters.

“Typically, 2% to 8% of listeners can be converted to subscription,” Sew Hoy said. “Partly, it depends on how you promote it.”

It also depends on scale, he said, having thousands, if not tens of thousands, of downloads per month. And areas of focus such as health or investing may attract more of those ardent followers willing to pay for still more content.

Higher-intensity approaches include offering “ask me anything” sessions, carefully annotated show notes with links and other background material, newsletters, search-enhancing transcripts, and even community features such as discussion forums for members.

Depending on how much a podcast might offer in these premium features, a subscription might run from $5 to $15 a month, Sew Hoy said.

Podcasts also can benefit even established stars from other media, Pittman said, pointing  to comedian Will Farrell and NBCUniversal’s low-budget horror auteur Jason Blum, who use podcasts to test stories and concepts before taking them to traditional media’s more expensive and time-consuming development cycles.

“I think it’s a great place to test out ideas, and get them out there,” Pittman said. “I know this: whatever we think sitting here today that podcasts will be, it will be well beyond that. The human mind has a hard time conceiving things that are different.”

On a separate note, this Wednesday, I’ll be doing a fireside chat at the Influencer Marketing Conference & Expo at the Los Angeles Convention Center. I’ll be sitting down on IMCX’s second day with Drieke Leenknegt, a globe-trotting consultant who spent two decades marketing sports gear for Nike, including overseeing its influencer-marketing operation. If you’re at the conference, please say hi.