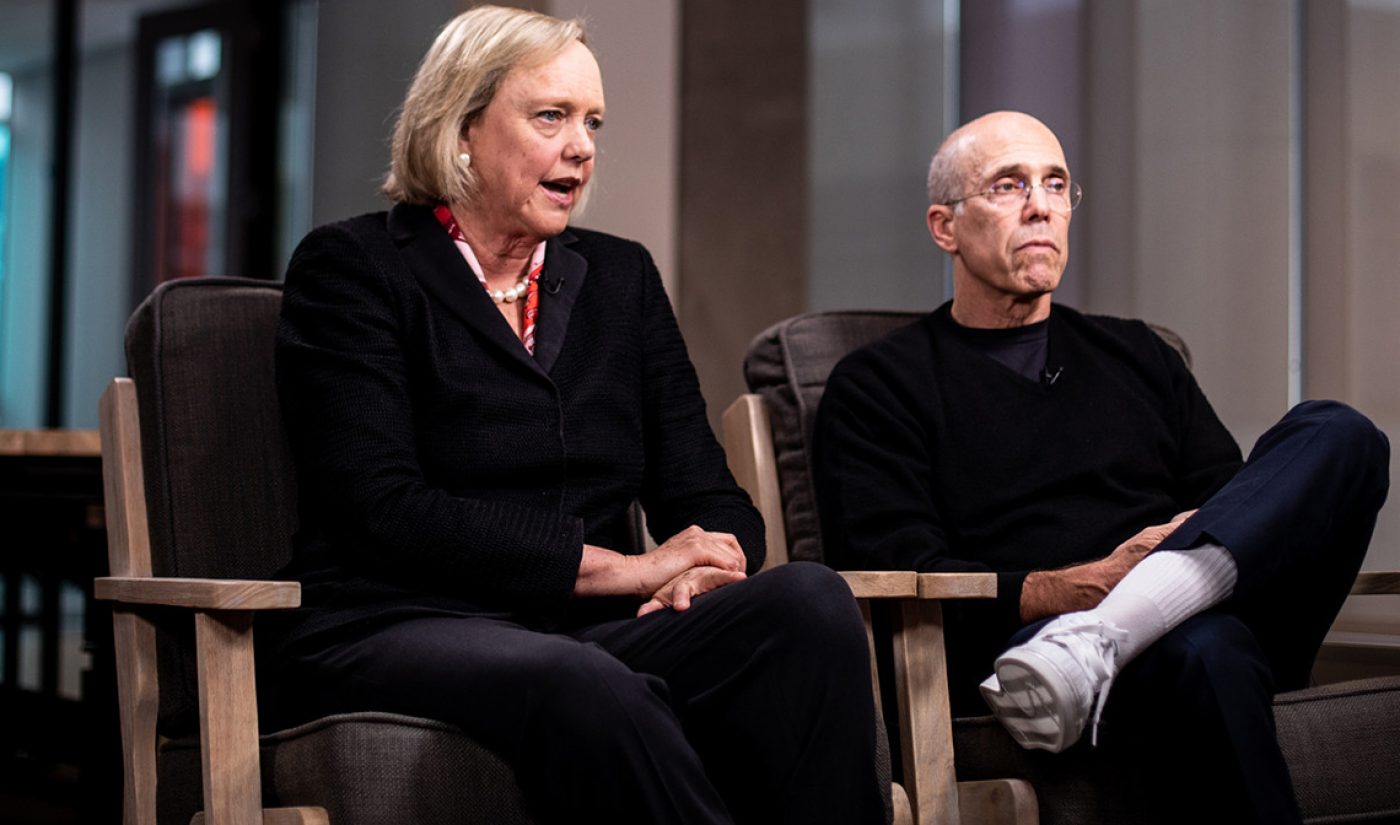 Quibi, that scrappy little $1.4 billion startup, came out publicly in a big way on Oscar night, sprinkling a string of mildly amusing clock-is-ticking ads throughout the annual awards show that somehow remains one of the most watched programs on what’s left of traditional TV.

A week before, Quibi had run a single ad somewhere in the middle of the commercialpalooza that is the Super Bowl. To its credit, the ad was Game Day’s eighth-most-watched on YouTube, according to YouTube, which is probably Quibi’s single biggest competitor.

And the week before that, Quibi kingpins Jeffrey Katzenberg and Meg Whitman did a different sort of audience outreach, flying into Utah for the Sundance Film Festival. There, they showed off a corner of their stable of storytellers (Lena Waithe! Veena Sud!) and the service’s still unfinished “turnstile” software (It’s vertical! It’s horizontal! It’s not done two months before launch!).

Oh, and Whitman apologized to another crucial audience, journalists, for using a staff meeting to liken reporters’ process of cultivating sources to the way sexual predators build relationships with young girls. Yes, I’ve often thought that the way young and inexperienced reporters interact with rich, powerful, older CEOs of major public companies such as HP and eBay (to mention two totally not-random organizations) is a great deal like predators and prey.

I’ll leave it at that, other than to note that one of the reasons they hired Whitman was because she allegedly was a practiced and smooth corporate hand who always knew the right thing to say. She definitely wasn’t hired for her famously awesome skills and vision creating video for mobile devices. But I digress.

The bigger matter at hand is that Quibi has officially begun banging on its drum, loudly, trying to attract potential subscribers–or at least teach them how to correctly pronounce the company’s name.

Some of those subscribers will pony up $5 a month–others $8 a month, for an ad-free version–to access 175 episodic shows, part of a promised 8,500 pieces of content to be delivered in Quibi’s first year.

Katzenberg and Whitman raised $1 billion last year, then decided that wasn’t enough money, because they realized they needed what the experts like to call a honkin’ big marketing campaign, which they estimated at the Produced By Conference last summer would run a whopping $470 million.

Even if Quibi shaved a few tens of millions of dollars off that bill, it’s still bigger than what even Netflix managed to spend this past Oscar season (The New York Times and Wall Street Journal put that campaign at between $70 million and $100 million, which Netflix disputed).

When I ran that number past Fred Chasse, a senior VP for marketing measurement company Analytic Partners, he practically whistled in awe.

And it may be only barely enough for Quibi to make a dent in the public consciousness, given all the other streaming services, established and new, trying to grab customers. The Academy Awards telecast was illustrative, if not a totally fair comparison, given Disney‘s advantage on the night.

Broadcast on Disney-owned ABC, the Oscars telecast featured the usual array of high-end advertisers, including multiple ads from show sponsors such as Cadillac and Rolex (and the not-so-upscale M&Ms). Amid the five (!) Quibi ads, Disney rolled out promotions for seemingly every corner of its burgeoning video empire.

Even show sponsor Verizon, which ran multiple ads on the night, had a connection, because its ads noted that it gives away Disney+ to its high-end mobile subscribers.

The New York Times, Google, and Microsoft all had ads, as did one of the companies that helps these streaming services make those new shows, Adobe. It contributed a trippy, Peter Max-worthy brand-building commercial late in the show that trumpeted all its creative software, but especially the video stuff such as Premiere Pro. All told, it was a good thing Quibi ran five different ads, or its message might have been completely drowned out.

That run of ads didn’t come cheap. For the Super Bowl the previous Sunday, Fox charged $5.6 million per 30-second spot to reach around 100 million viewers. According to Ad Age, ABC charged a bit less than half that price, to reach an audience a bit less than a third as big.

“The return on investment doesn’t make sense for some companies, unless they’re doing [an Oscars ad] for other strategic purposes,” Chasse told me.

Quibi definitely had some other strategic purposes. I agree with Chasse that the Oscars, the so-called “Super Bowl for women,” were a good place for Quibi to begin its ad blitz in earnest.

An Audience Worth Keeping

“I think it’s cool for them to do short ads,” Chasse said, given the match with Quibi’s content plans. “I’d never heard of them before this. The number of spots they had made them more relevant. It really reinforced them, and put Quibi on the map.”
Katzenberg and Whitman better hope the service is now on the map for a lot of Oscar viewers. As it is, the map of streaming competitors is a lot more crowded now than it was last summer. And if Whitman thinks journalists are predators, wait until she gets a better look at Bob Iger and Jeff Bezos. Those guys are ferocious.