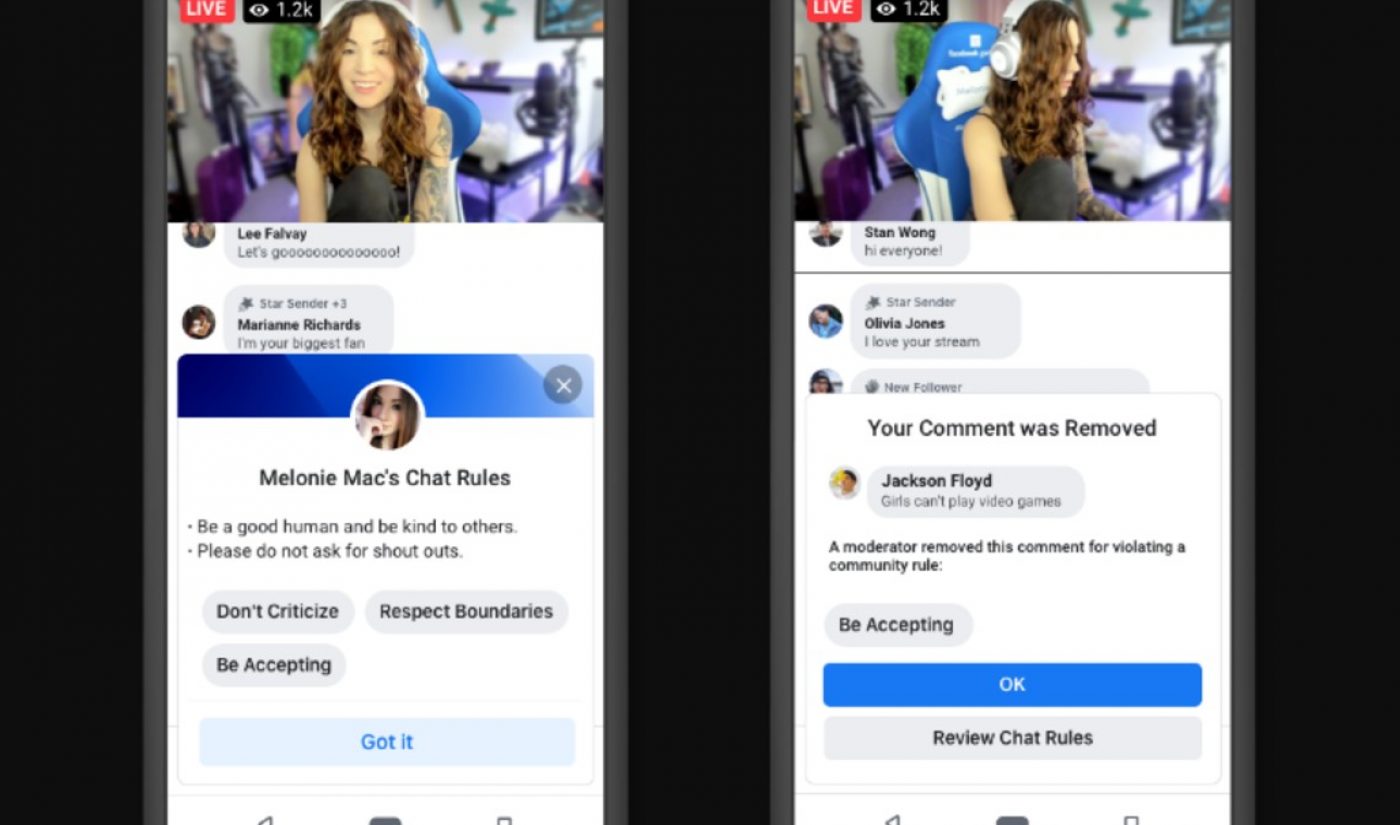 After making several noteworthy grabs in the gaming space — including poaching streamers Jeremy ‘Disguised Toast’ Wang and Corinna Kopf away from Twitch — Facebook has announced a new ‘toolkit’ to help promote inclusion.

Facebook says it collabo with the Fair Play Alliance — a coalition of gaming companies working to establish healthy online communities — to develop rules that creators can choose to implement before they go live. The eight preset rules include: ‘Be accepting’ (no matter a community member’s race religion, sexual orientation, or gender identity); ‘Respect boundaries’ (in terms of not making advances or comments based on appearances); ‘Don’t criticize’ (someone’s gameplay or game choices); ‘Don’t be rude’ (in terms of threats or insults); ‘Don’t flood the chat’; ‘Don’t self-promote’; ‘Keep it clean’ (with respect to obscene or inflammatory content); and ‘No profanity’.

Creators can select from the above standards in the ‘Chat Rules’ section of their dashboards, and fans will be asked to accept them before being allowed to comment. The toolkit is being tested today among a small group of creators, and will roll out globally in coming months.

While creators previously were able to list chat rules in their Page descriptions or at the bottom of streams, the toolkit makes them more visible, while also providing an expertly-sourced baseline of rules. The rules will be expanded and updated in the future based on feedback, Facebook says.

“While our Community Standards protect against the most egregious harms like hate speech and terrorism, sometimes all it takes is one person being rude, mean, or simply disruptive to ruin a conversation for everyone,” Facebook Gaming product manager Clara Siegel wrote in a blog post announcing the updates. “And what may be considered competitive banter in one streaming community, might be considered toxic in another. Gaming creators are tone setters, so that’s why we’re releasing a toolkit to help them set guidelines for positive conversations in their community.”

In addition to the preset rules, Facebook says comments that violate any creator-set terms will be removed in real time. (In addition to removing comments, creators and creator-selected moderators will also have the option to mute offending users for a specific time period, or ban them entirely). At the same time, the platform will seek to provide transparency to blocked commenters, giving moderators the ability to let them know which rules they violated.

And finally, moderators will now gain access to a new dashboard with resources that work to prevent harassment and protect their privacy.