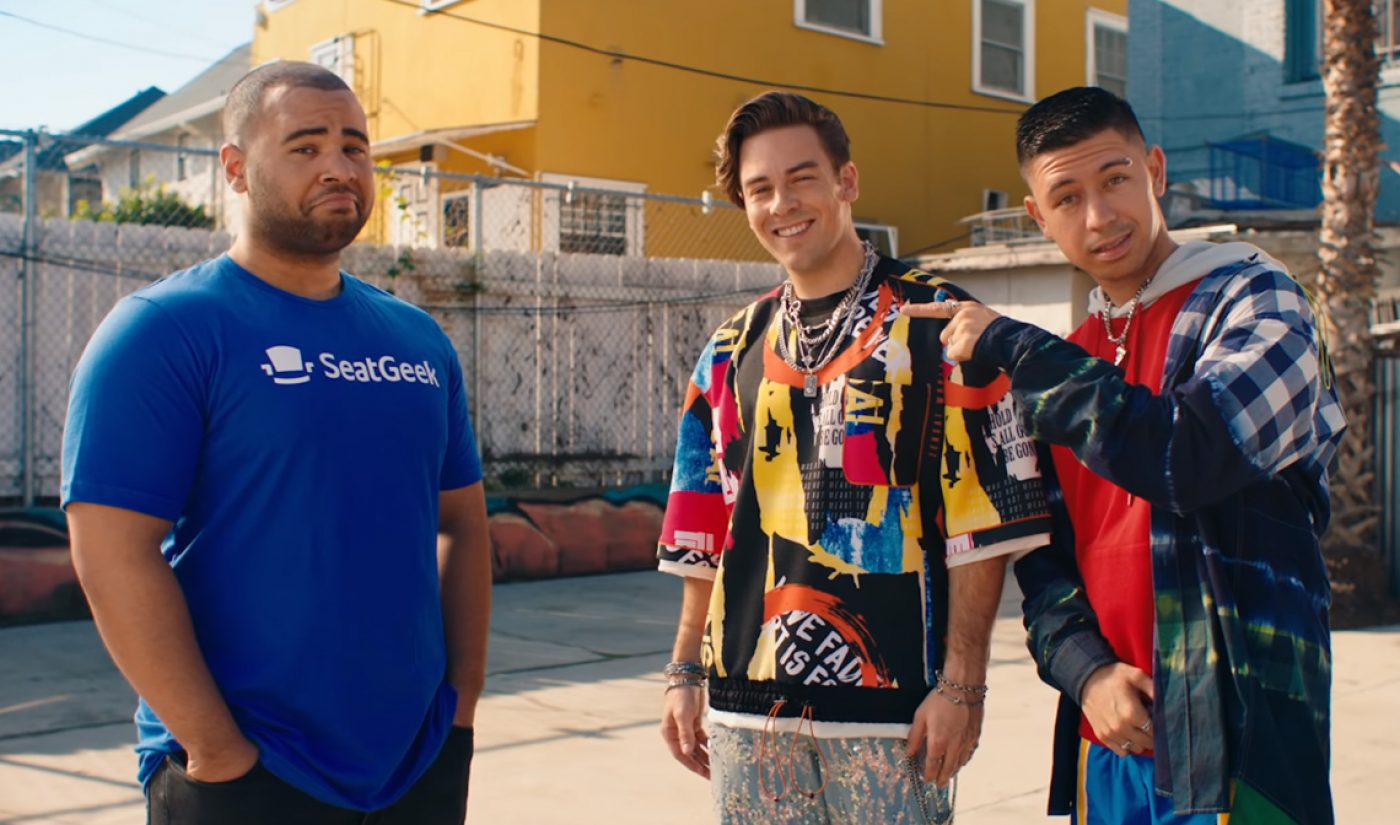 SeatGeek paid for Tiny Meat Gang’s new music video–and they want you to know it.

“Advertising in music videos has always been a forced brand placement,” Ian Borthwick, the ticketing app’s director of social media and audio influencer channels, tells Tubefilter. “Typically, brands try to disguise the fact that this is an ad, even though it’s obvious. For SeatGeek’s first foray into music, we decided to go against traditional marketing and lean into the fact that this is an ad.”

And they definitely leaned. Around two and a half minutes of the five-minute video features Ko (who has 4.27M subscribers and nets an average of 40M views per month), Miller (1.76M, around 6M monthly), and their sweet ride. (Their shared TMG channel has 514K subscribers and gets around 2.5M monthlies.) But after “Broke Bitch” tapers off, the vid cuts to a shot of the pair wincing at their now-crashed car. Mid-mourn, TMG is interrupted by a super friendly SeatGeek employee popping up à la State Farm.

“Wait, don’t you guys give out a lot of free cars online?” Ko asks. It is, of course, a reference to SeatGeek becoming known for giving away numerous cars in partnerships with digital creators, most notably David Dobrik.

The company’s cool with giving a nod to what Borthwick calls the “SeatGeek-is-a-car-dealership meme,” but they also want viewers to know what their actual everyday business is.

“Well, we’ve done that in the past, but that’s not exactly what we do,” Mr. SeatGeek tells Ko and Miller. Cue zoom on his face and angelic backlighting as he recites, “SeatGeek is an amazing app that helps you buy tickets in literally the easiest way possible.”

For SeatGeek and TMG–who’ve been working together for more than three years–making sure the ad content aligned with Ko and Miller’s usual comedic, chill style was vital. “Our top prority was to make sure our sponsorship fit naturally into the music video,” Borthwick says. “We didn’t want to be another static ad that fans skipped over.”

Judging by the comments on the video, fans not only aren’t skipping, they’re actually excited that it’s an ad.

“I voluntarily watched an ad. Just saying,” one wrote. Another paired smileys with a caption celebrating Miller “having a chance to make a music video to show off some of his crazy ideas and incredible talent at directing without having to pay for expenses.”

The video, uploaded to Ko’s channel this afternoon, has half a million views so far and 83K likes.