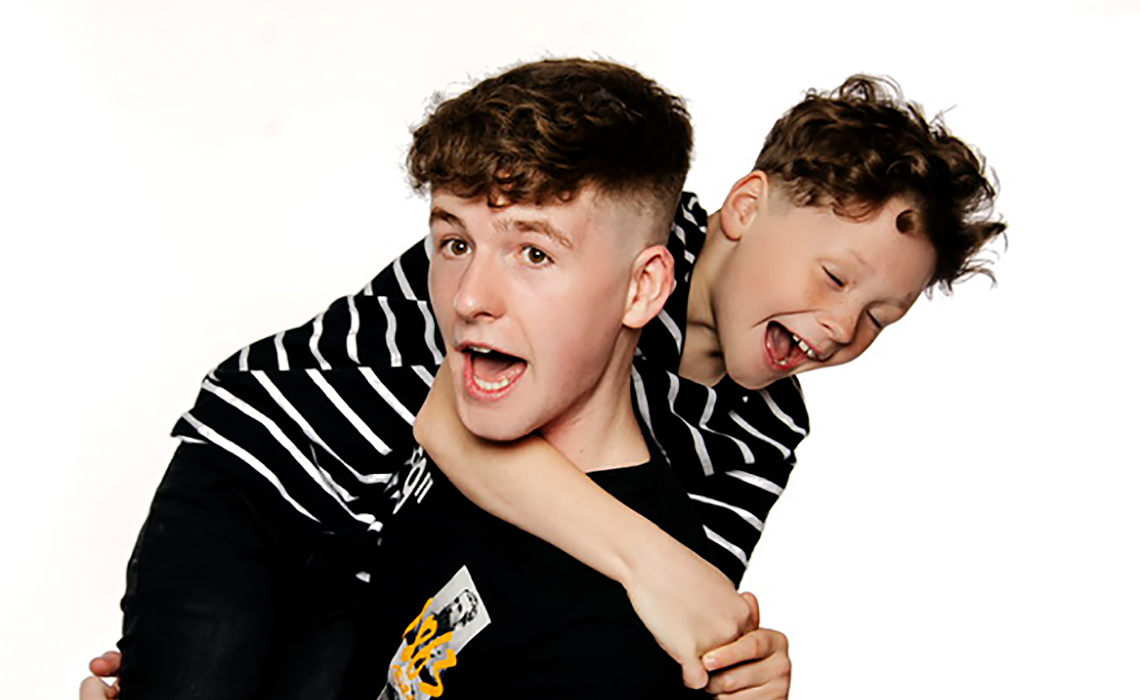 Little siblings get a bad rap. Nearly every older sibling can recount a time where, ugh, they just wanted to hang out with their friends, or get up to their favorite hobby, or have some peace and quiet, but their little sibling tagged along, trying to be just like them. It’s a seemingly universal experience — but not one Adam Beales shares.

When Beales’ little brother Callum, who’d long starred in Adam’s YouTube videos right alongside him, expressed interest in starting his own channel, Adam wasn’t annoyed. He was thrilled. For 20-year-old Beales, YouTube is a way of life. He started vlogging in 2012, when he was just 13, and has established his channel as a hub for the latest, trendiest prank content. He’ll freely admit that 10-year-old Callum has played a not-so-small part in his success. Adam is a prank master, and Callum is frequently the prankee — except when he’s pranking Adam in revenge.

Last year, the duo’s antics (which have netted Adam 2.51M subscribers and bring him around 18M views per month, and have brought Callum’s much newer channel 198K subs and around 500K views per month) caught the attention of Disney. The network featured them as part of its #VloggerTakeover series. The takeover was a new type of project for them…but not the only new type of project they decided to tackle. See, it wasn’t just Callum who’d grown popular by guest-starring on Adam’s channel. Their parents (including their mother, who’s actually employed by Adam as his video production partner) had also occasionally appeared in videos — and the family had noticed that those videos often got a positive reception from Adam’s audience.

With that in mind, they decided to launch Family 4, a brand-new channel shared by all four of them. The channel launched in May and only has eight videos, but so far has brought in a not-too-shabby 83.5K subscribers and an average of 250K views per month. Family 4 does feature some of Adam and Callum’s bread-and-butter prank and challenge content, but it’s primarily a vlog channel, chronicling things like the Beales’ recent vacation to Paris.

For Adam, the channel is a way for him to continue filling his digital home with content he truly cares about, made with people he truly loves.

Tubefilter: So first, welcome back to Tubefilter! For those who may not know you, tell us a little about you. Where are you from? What did you do in ye olde days before joining YouTube?

Adam Beales: Hi! I’m Adam B, and I am from a little town called Derry in Northern Ireland. Before YouTube, I always had an interest in making videos. I had all my friends on my street tortured, as I had them making videos constantly with me. I think making videos is in my DNA.

Tubefilter: You’ve been vlogging for years, and your brother Callum has long been involved in your videos, but we hear your family has become even more involved with YouTube. Tell us about Family 4! How did your family decide to launch the channel?

AB: Recently, I did a few videos involving the whole family on my channel. We really enjoyed shooting content together and creating family content — and the fans loved it too! So, we thought it was the natural step to open up a dedicated channel that is used solely for family content.

Tubefilter: What kind of content can people expect to see from your channel vs. Callum’s vs. Family 4? Do they all feature similar content/content strategies, or are you and your family differentiating them?

AB: We try to make Family 4 more of a vlog/behind-the-scenes channel, where everything is stripped back and it’s just us talking to a camera. On the other hand, my channel and my little brother’s channel are both more entertainment-based, with more dedicated challenges and pranks. We’ve noticed people enjoy watching us just talking to a camera every once in a while on the Family 4 channel compared to the constant extreme challenges and pranks that Callum and I tend to do on our channels.

AB: I remember this so clearly, because Google’s threshold of revenue payments was £60 [note: that’s currently around $77 U.S.]. That means if you didn’t earn over £60 in AdSense in one month, it rolled over to the next month. Basically, I remember building my revenue up and up from £10, to £20, and eventually, after several months, to £60. I think this took place sometime in 2016. I remember feeling so proud that my work was actually being rewarded financially on YouTube!

Tubefilter: You’ve had a number of brand partnerships, including one where you appeared on Disney’s #VloggerTakeover series. How have some of those partnerships come together? When did you first begin getting partnership and sponsorship offers?

AB: A majority of the time, it is the brand coming to look for the talent. I’ve been lucky enough to be approached by a few brands over the years, and have collaborated via sponsorships and brand deals both on YouTube and Instagram.

I first began getting sponsorships around mid 2017. However, I think my very first brand collaboration was with a [shoe care] company called Crep Protect. At the time, I had like 5K subscribers, and they sent me a free care package full of their products in exchange for a dedicated video review. At the time, I thought this was HUGE, especially since I only had 5K subscribes. However, looking back, I see now that I didn’t realize brands actually paid YouTubers real money to advertise their stuff. I just thought we got sent free stuff! I eventually learned that years later.

AB: To make people happy and — if we’re lucky — laugh!

Tubefilter: What was that Semaphore Moment for you — the first time you realized you were a professional creator?

AB: I think it got real when I finished school last year. I was destined to go to university, but decided to discover this alternative YouTube path instead. Whenever my friends from school left to go to university in September/October time, I felt alone, almost like I was bobbing around in the ocean. Looking back, that was the moment when it hit me — the feeling of becoming a full-time creator.

Tubefilter: What’s your production schedule like? With three channels in the house, it’s got to be busy. How long does it take you to plan, film, and edit a video, on average?

AB: We try to film at least three videos per week for my channel. As of recently, with the new family channel, we are trying to film for that channel at least once a week, and for Callum’s channel, once a week due to school and studying for his Transfer test later this year. It can be very hectic in the house during the week!

Tubefilter: Who else works with you behind the scenes? Do you have any employees, or folks like an editor or assistant? What about a manager or network?

AB: I’m lucky enough to employ my mum as a video partner for researching video ideas and video production. I also have editors for when I am at events or if I have no time to edit due to traveling, etc. My editors are based in L.A., so the time difference is an efficient way for them to edit the videos while I am asleep in the U.K. I’m with a management firm called Studio71 U.K., which helps with events and deals outside of YouTube as well as the occasional brand deal for my YouTube videos. But it’s very much a family operation, as we all help out with everyone’s channel. We love it!

Tubefilter: Have you ever experienced burnout? How do you stave it off?

AB: Definitely. YouTube, as of recently, is becoming more and more corporate — in the sense that you have to feed the algorithm what it wants instead of creating the content you would’ve liked to or the content you would hope to make. There was a period last year where I was really low and burned out, mostly due to the poor performance of my videos and overall channel. But I just hustled through it. I continued to grind by making videos, until eventually, the algorithm was back on my side. My channel became more recommended and eventually started to get the views it was once getting prior to the low period. This, coupled with other YT problems like new upload notifications not being sent out, can really frustrate creators. You start to think the poor performance is because of you: “Am I becoming irrelevant? Do people not like me anymore? Are people tired of me?” It’s that sense of toxic questioning that can really burn a creator out — and, in the worst scenarios, affect their mental health. YouTube isn’t fun and games all the time, lol.

Tubefilter: What’s next for you, your family, and your channels? What are you building toward?

AB: We’re building toward reaching a massive audience who watch and enjoy the dynamic of our family, our challenges, and our pranks! We want to bring people together and make them happy!

Creators Going Pro: CEO Ryan McNulty Is “A Serial Entrepreneur” Whose First Business Was His Own YouTube Channel

Creators Going Pro: Andy George’s Rebooted Series ‘How To Make Everything’ Will See Him Create Civilization From Scratch