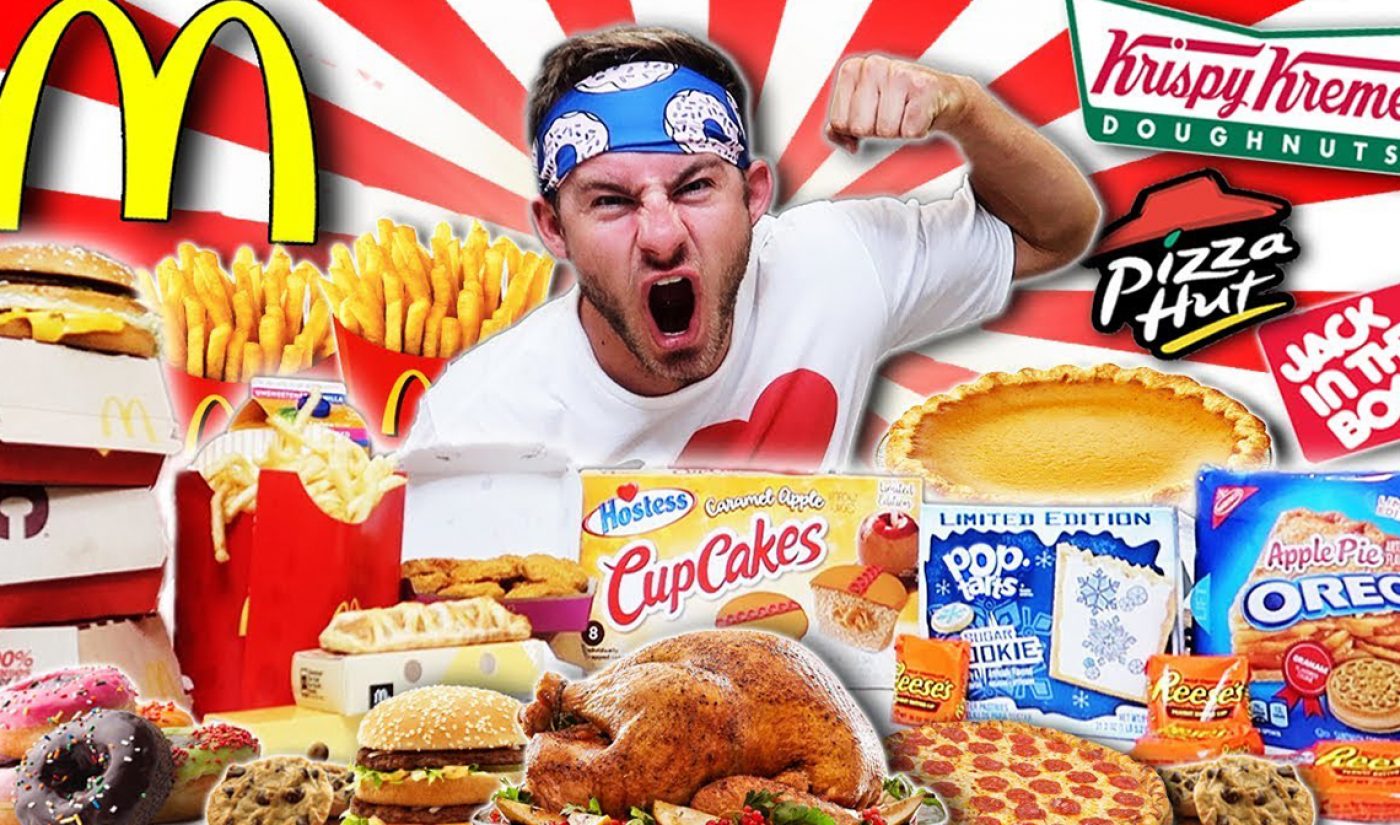 This installment of YouTube Millionaires is brought to you by MagicLinks.

Erik Lamkin has a great many skills. He’s an accomplished guitarist (and prefers playing electric, hence his channel name Erik The Electric), he’s a biker, and he’s great at figuring out what kind of content his more-than-a-million YouTube subscribers want to see.

And, as it turns out, his YouTube subscribers want to see content about his other skill: consuming vast amounts of food in one sitting.

With the nearly constant stream of local news stories about mukbangers making it on YouTube, you might be thinking, Yeah, there are thousands of mukbanging channels, why is this one different? Well, first, Lamkin doesn’t mukbang. “Mukbang,” for those who don’t know, is a Korean word — which makes sense, because the trend started with Korean digital stars. Mukbang content involves creators consuming large quantities of usually oft-craved foods like pizza, barbeque-slathered ribs, or local delicacies.

Mukbangers generally don’t have a goal they want to meet; they’re there to eat as much as possible. Lamkin, on the other hand, has a challenge in mind for every video. He sets out to eat specific amounts of food. Sometimes his end goal is to reach a certain calorie count (see his 100,000 calorie challenge below), sometimes it’s to consume a restaurant’s entire menu, and sometimes it’s simply to eat an amalgamation of tasty foods chosen by himself or his fans. Lamkin preps and trains for all his challenges, and is dedicated to keeping himself healthy while successfully completing such rigorous eating tasks.

For Lamkin, food has become a source of power. He first started eating challenges as he was recovering from anorexia, which he developed from struggling with his weight and body image as a teenager. He found that allowing himself to accomplish food-related goals was a kind of freedom, and an excellent way for him to stay on the road to mental and physical health.

On YouTube, he knows folks tune in to see him accomplish seemingly superhuman culinary feats, but he also hopes they watch for his positivity, for his spreading of awareness about how eating disorders can affect people’s lives, and for a glimpse of someone who proves that recovery (and building a wholesome relationship with food) is possible.

Erik Lamkin: It feels great! I never would’ve imagined I’d be at this point. I remember going on YouTube as a kid, and thinking how insane it would be to have a million people “following” me, and here I am!

Tubefilter: Tell us a little about you! Where are you from? How did you discover your talent for eating copious amounts of food in one go?

EL: I go by Erik The Electric, but my real name is Erik Lamkin. I’m a 26-year-old guy from Chicago who moved to southern California when I was young. I graduated college in 2017 with a bachelor’s in communications, but instead of taking to the “typical” post-college job world. I decided to become a full-time YouTuber.

I’ve always had a passion for food. I grew up in a pretty chaotic household and turned to food whenever I was down or whenever I wanted to run away from what was going in on my world. I actually become overweight and was teased and bullied for it. After dealing with that for the majority of my childhood, I got tired of it and lost weight really quickly, and eventually was diagnosed with anorexia nervosa when I was 16.

I went through a number of treatment centers and so many different programs over the years until I decided to fully recover in 2012. At the time, I was in a residential hospital for it, and I saw the severities of how eating disorders can affect people’s lives. To see little kids who would otherwise be living like normal kids, playing outside, smiling, playing sports, doing NORMAL little kid stuff, instead hooked up to feeding tubes, confined to wheelchairs…It really put it into my head that I needed to get better.

So, eight months later, I did my first food challenge, and felt like an entirely different person. I had the “mental freedom” to eat what I wanted, without any guilt or bad feelings. That made me realize this was actually FUN! I decided to do another one a week later, and then it just became a hobby of mine. I did food challenges as a “hobby” until I decided that I actually wanted to make it a full-time thing. It was apparent to me that through my videos, where I preach balance through having both one’s MENTAL and PHYSICAL health, that people liked what they saw, and I could also relate and empathize with the millions of other people out there who dealt with and still do deal with what I went through.

EL: I started YouTube initially in the early stages of my disorder to “vlog” my mental progression. I would literally sit in front of my phone/iPad in 2011 just to verbally express how I was feeling. The videos were private, and no one saw them but me.

But in a strange way, it helped me. I also went online and researched other mental health channels, and found there were other men out there dealing with the same insecurities I did. I started my main channel Erik The Electric because I thought of my nickname in high school. I’m an avid guitarist, and since I’m obsessed with electric guitars, the name has always “fit.”

Tubefilter: We’ve watched some of your videos, and we’re fascinated by your abilities. Do you have any tips/tricks for eating the way you do?

EL: Just like baseball, soccer, football, tennis, and other sports, eating large amounts of food is all about PRACTICE. I didn’t go from being able to eat a few sandwiches in one sitting to eating the ENTIRE Subway sandwich menu in one sitting, overnight.

I’ve always had a big appetite. I would eat whole pizzas by myself after Friday night soccer practice as a kid. I wouldn’t recommend that (for health reasons, obviously), but if you want to eat more food. Just like anything, it’s best to gradually try to eat more fibrous foods (broccoli, cauliflower) and your stomach will begin to expand as you keep eating more each time.

Tubefilter: Mukbanging is a huge trend on YouTube right now, as you of course know. Why do you think people are so into marathon eating content?

EL: I actually have no idea. I actually wouldn’t consider myself a “mukbang channel” because I do food challenges. But I definitely talk during a lot of my videos.

But regardless, my answer would be the same if the question was posed at being a food challenge channel. Food in 2019 is RELATABLE to everyone. Everyone knows what a McDonald’s burger looks like, so if they see someone eating 40 in 10 minutes, it makes the “WOW” factor increase.

EL: I think I offer just the right amount of humor AND cringe to make people understand that I’m definitely not the average person. I’m also a guy who wants to entertain and put smiles on as many faces as possible. I put my heart and soul into every video I make, and do as much as I can to spread positivity in the world.

I also encourage more people to do the same. I think YouTube is one of the few platforms that allows creators to spread positivity and awareness in any way they choose. I just recently completed one of my food challenge “tours,” and through YouTube, I was able to raise $2,600 for St. Jude Children’s Research Hospital!

Tubefilter: How do you come up with new ideas for videos? Do you ever take suggestions from viewers? Do you have a sort of to-do list or bucket list where you keep ideas for future eats?

EL: All of my videos definitely have thought behind them. Every holiday video is pretty much set in stone. I KNOW I’ll have to do a video for Christmas, Thanksgiving, my birthday, etc. Apart from that, I make each video with what I think my audience wants to see on YouTube.

Tubefilter: When did you start noticing your audience really picking up? Was there one specific video that attracted a lot of attention?

EL: In 2017, I asked myself if I really wanted to try something new with YouTube, instead of constantly filming vlogs followed by the once-a-month food challengse. I got tired of people telling me they didn’t care about the random stuff about my life. They just wanted food challenges.

Now, I know not ALL of my audience is like this, but I decided, “Hey, why not try JUST food challenges for a month?” And it ended up being the best decision of my life. Instead of trying to put up 5,000 different types of content on my channel (biking, fitness, health, cooking, food challenges…), I narrowed it down to one thing, and I ONLY did that one thing. In six months, my average video was getting 200,000 views instead of 20,000 views.

My biggest video I ever made was my 100,000 calorie challenge, which just surpasses 8 million views. It took so much out of me, including a near hospital trip and tons of weight gain and energy. But it was worth it. Right now, after hitting the million, I’m going to keep growing my audience by consistently trying to do NEW and FUN food challenges.

Tubefilter: What else do you get up to in your day-to-day life?

EL: I’m an avid cyclist; I have three road bikes and ride four times a week in San Diego, where I live. If I’m not working on my channel, filming a food challenge, or out on my bike, you’ll find me in the gym, where my other home is!

EL: Without a doubt, my favorite part of making content on YouTube is being able to meet my fans and subscribers.

Tubefilter: What’s next for you and your channel? Any fun plans?

EL: Tons of CRAZY content to come. More food tours, and I eventually plan to be on TV soon! But don’t worry, regardless of anything, I’ll ALWAYS be a YouTuber. YouTube changed my life.

You can add yourself to the ranks of Lamkin’s more-than-a-million YouTube subscribers at his channel YouTube.com/ErikTheElectric.

This installment of YouTube Millionaires is brought to you by MagicLinks.

Born in 2015, MagicLinks is the fastest-growing video influencer platform powering social commerce. Trusted in over 195k campaign videos, viewed by more than 21B fans, MagicLinks’ digital artist community has driven more than $750M in product sales for global brand leaders. MagicLinks is the global leader in authentic social commerce for video Influencers. Our technology offers digital artists a way to earn income as their fans shop and connects impactful sales drivers with brand sponsorship opportunities. Come join our vibrant community of premium video creators and be part of the magic.