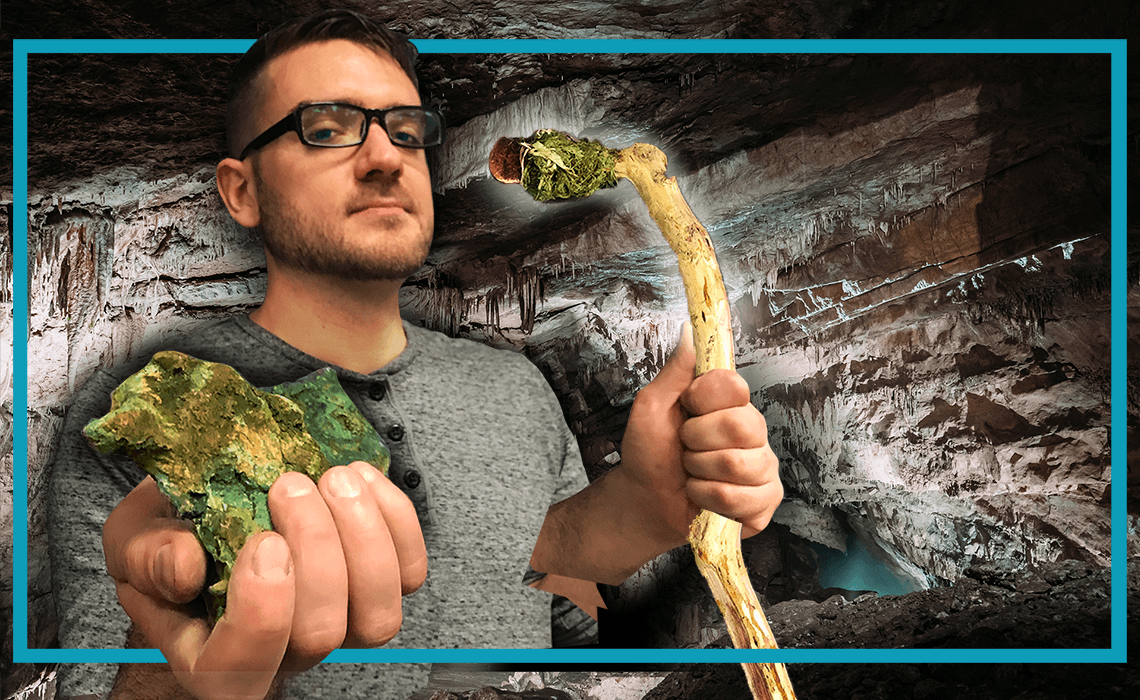 Creators Going Pro: Andy George’s Rebooted Series ‘How To Make Everything’ Will See Him Create Civilization From Scratch

Now’s where we give you good news: You don’t have to imagine, because Andy George, creator and host of YouTube-hosted show How to Make Everything, recently rebooted the educational series to explore humanity from the first stone tool. Hosted on a channel of the same name (which has 1.25M subscribers and brings in around 4M views each month) since 2015, How to Make Everything has been a labor of love for George, who just wants to understand how to make everything — and he does mean everything — from scratch.

In the past, George has produced videos where he’s tackled hand-making hundreds of things, from quill pens to chocolate to paper to gold to an ice-block-based refrigerator to (almost) a telescope to eyeglasses to candy corn to an obsidian sword to…well, much, much more.

There is one handmade item that calls for special attention: George’s self-made sandwich, which cost him a whopping $1,500 to make. That’s not because he made it at Serendipity 3; it’s because he created all of its components completely from scratch. It took him six months to grow his own vegetables, make his own table salt from oceanwater, make his own cheese, grind his own flour, harvest his own honey, and butcher his own chicken. That impressive endeavor, undertaken in 2015, and its resulting video is what George says really kicked off his channel and drew in viewers who were fascinated by his commitment to creation.

George supplied those viewers with around one video per week for nearly four years. Then, in August, he changed everything.

He rebooted his flagship series, sending it back to the past for phase two: How to Make a Civilization from Scratch. The project is enormous, following George as he starts from the beginning of time and recreates humanity’s most vital inventions. Over the past two months, he’s learned how to flintknap (aka make our earliest stone tools), how to make pottery from river clay, how to collect native copper, how to fell trees the neolithic way, how to make a dugout boat, and how to make a bow and arrow.

George plans to spend the next months (or possibly years) quite literally making his way through time, with the ultimate goal of bringing all his viewers along as he creates his own miniature Industrial Revolution — including a full-fledged steam engine.

Check out our chat with this curious creator below.

Tubefilter: So first, tell us a little about you! Where are you from? What did you do in ye olde days before joining YouTube?

Andy George: I was born and raised in Minneapolis. I went to school for video production, and worked a few different advertisement jobs doing motion graphics for several years before I started working on this series full-time.

Tubefilter: What made you choose YouTube as the place to share your content? What do you think it offers you, as a content creator, to help you grow your platform and build your career?

AG: I started How to Make Everything first as a documentary, which I showed at film festival, then tried airing it on local television here in Minneapolis, but none of that really gave it any traction. After that, we started to put it on YouTube, and had our first viral success with How to Make a $1,500 Sandwich in Only 6 Months, and actually started to see the possibility of earning money and possibly making this a career.

AG: I think it ended up happening just as an inevitable union of two passions I have: learning and telling a story through film. I originally had no desire to be the person in front of the camera, but didn’t have anyone else who was willing to do an insane amount of work without pay for many years.

AG: The first money I earned was from YouTube ad revenue for the first viral sandwich video. Funny enough, it was pretty close in value to the $1,500 cost of the sandwich.

Tubefilter: How do you come up with topics for your videos? Do you ever ask your viewers to submit queries?

AG: Most often, ideas are pulled from everyday life, looking at the things I interact with each day and pondering what it would take to make that ourselves. With the new direction of the series we just started, it’s become another level of complexity; we wonder when was this item first made, with what tools and technologies, and where does it fit on a timeline of human inventions?

AG: I never really felt like I could consider myself a professional creator until I could start living off the revenue from How to Make Everything, and we reached that point in January 2017, when our channel really started to finally take off and started to turn into a real business, rather than an expensive hobby.

AG: Definitely chocolate. Being able to visit where it was grown in Mexico, learn the process to make it from the locals, and then producing my own delicious chocolate was an amazing experience.

Tubefilter: What makes you passionate about content creation as a career? Why is this profession one that engages and excites you?

AG: My curiosity is always my greatest passion, and it’s what drives me the most. Being able to actively pursue wherever my curiosity takes me is a great joy about this job. I’d likely do all this even if there wasn’t a camera there, although being able to craft a compelling narrative from the footage is also a great driving force.

Tubefilter: How long does it take you, on average, to put together a video, from scripting to filming to uploading?

AG: Our goal is to produce a video in roughly four weeks, but often issues come up that slow that process down, sometimes causing projects to take nearly three years.

Tubefilter: Who else works with you behind the scenes? Do you have an editor? Camerapeople? What about an assistant, or manager?

AG: We’re currently a six-person team, including myself. Three full-time, three part-time. Many roles are shared by multiple people, but three of us usually do the editing, while one shoots, one helps with graphic design, social media, and Patreon management, and one helps produce and lines up experts and shoots. And we just recently added Annalise as my assistant to help me out both behind the scenes and on camera. We first started adding people about a year ago.

AG: Tenacity. I won’t quit until the job is done. I think it’s likely the one attribute that’s allowed us to succeed. Anybody could do what I do, and many could likely do it better, but there are not many who will start these ambitious projects and keep going until it’s completed, no matter what issues and challenges come up along the way.

AG: We just did a “reset” on our series to start back at the birth of humanity, and will slowly build our way up through history with me making all my own tools and items. I aim to eventually have my own industrial revolution from scratch and build a steam engine.

Creators Going Pro: YouTube Gets Viewers Into The Mind Of Gamer Rez And His ‘Fortnite’-Loving Family

Creators Going Pro: CEO Ryan McNulty Is “A Serial Entrepreneur” Whose First Business Was His Own YouTube Channel