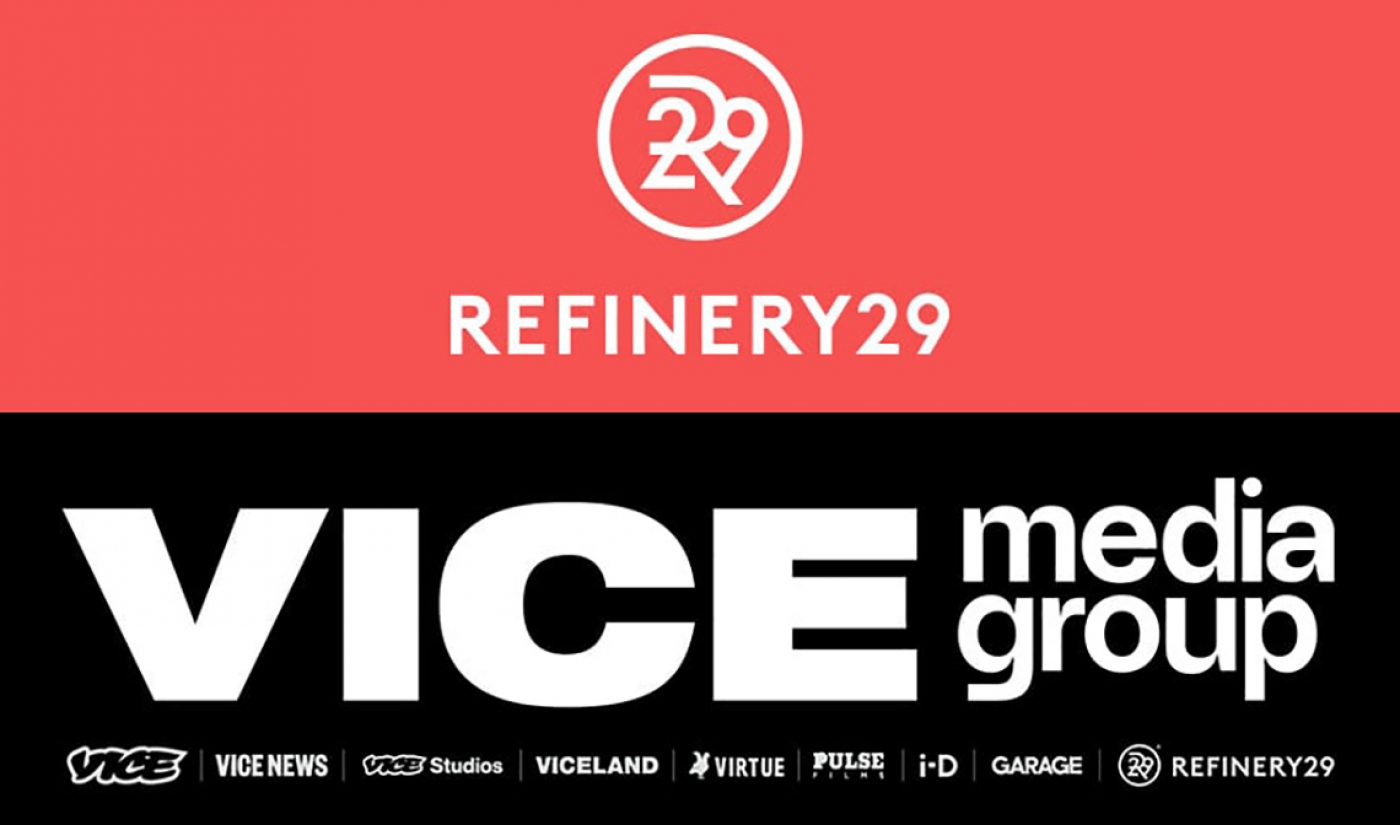 Vice Media is acquiring women’s lifestyle outlet Refinery29 in a deal that will see the duo form a new entity: Vice Media Group.

The exact financial terms of the deal (which is expected to close by the end of the year) haven’t been revealed. However, Variety reports that Vice primarily will pay Refinery29’s shareholders by issuing them a combination of cash and shares of Vice. The future combined entity, Vice Media Group, has been valued at $4 billion, which is nearly $1.7 billion less than the valuation Vice alone held when it sought $450 million in funding in 2017.

Refinery29 will continue to operate independently as part of Vice Media Group, but the group will combine Vice and Refinery29’s content production, events, affiliate, and ecommerce businesses. Vice’s in-house ad agency Virtue will partner with Refinery29’s ad team to scale its marketing.

It’s not clear whether the outlet, which cut 10% of its staff almost exactly one year ago, will lay off more people or whether it’ll see a changeup in its internal executive structure following the deal’s closure. We do know that Nancy Dubuc, current CEO of Vice Media, will become Vice Media Group’s CEO, and the leadership at Refinery29 (that is, co-CEOs and cofounders Phillipe von Borries and Justin Stefano) will report directly to her.

For now, it does appear that Vice and Refinery29 don’t plan to shrink the latter — at least, not in terms of physical footprint. Variety reports that Vice considers Refinery29’s four offices (located in New York City, Los Angeles, London, and Berlin) “complementary to” its own offices in those locations, and will give Refinery29 the opportunity to expand to the other 30 cities in which Vice has offices.

Von Borries and Stefano told Variety the deal is a “transformational partnership” that will “allow our mission and business to flourish further.”

“This is an expansive moment for independent media,” Dubuc added in a statement. “We will not allow a rapidly consolidating media ecosystem to constrict young people’s choices or their ability to freely express themselves about the things the care about most. At Vice and Refinery29, the megaphone is theirs to use and the platforms are theirs to build with us.”

Vice Media Group as a whole will strive to reach a young audience with high-quality content. To that end, both Vice and Refinery29 will each invest 20% more into producing premium content, and will continue to bump up the amount of that investment by 20% every year going forward.

As Vice Media Group, Vice and Refinery29 expect to bring a total of 350 million unique monthly visitors, a 17% boost from their current combined total audiences. They expect to put out more than 1,700 pieces of content per day.

Rumblings of big publishers merging together to command more sway with platforms and advertisers have been ongoing in the online publishing industry for a while now, with big entities like BuzzFeed specifically bandying about the idea of joining together to do things like push Facebook and Twitter to give them higher cuts of ad revenues.