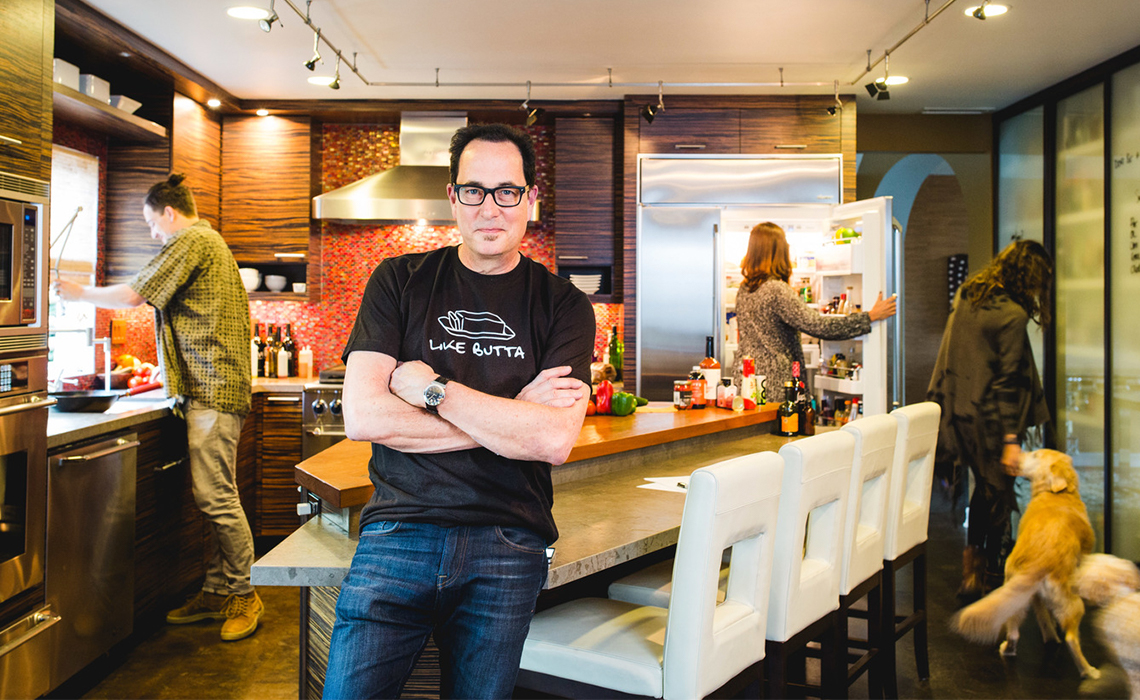 At Sam the Cooking Guy, viewers can get the whip-smart knowledge of a professional chef beamed straight into their brains. The YouTube channel, which, as you may have guessed, recently crossed the one million subscriber mark, is home to connoisseur Sam Zien — and, behind the camera, his son Max.

Zien, who’s published three cookbooks and has his own restaurant, Not Not Tacos, in San Diego, made his first foray into cooking TV nearly 10 years ago. His original plan was to host an Anthony Bourdain-esque travel show on a major network, but after some roadblocks, he ended up shifting his focus to local television, and landed an early morning slot on his city’s news program. The slot, for which he didn’t get paid, nabbed him a regional Emmy, and suddenly, Zien was off. In short order, he snapped up a half-hour (paid!) slot on a local network, and then moved on to the Discovery Channel, which produced a season of his first major show, Just Cook This.

Following his time on TV, Zien wanted to figure out how to reach more people, with cooking segments that spoke to what he really digs about food: good, strong, simple recipes that anyone can make. He ended up, of course, going to YouTube. And while Zien does all the in-front-of-the-camera work, showing folks how to make the world’s best burgers, tacos, stuffed crust pizza, and much, much more, he credits his son Max, who does all the filming and editing, with attracting viewers by keeping their content’s production value so high.

Zien and Max keep up a rigorous schedule, uploading three times a week — so, if you’re ever short of ideas on what to make for dinner, there’s a good chance something new and very delicious has popped up on their channel.

Check out our chat with Zien below.

Sam Zien: Honestly, it’s crazy. Of course, as you get close, you think about it a lot, but it still is so amazing when it happens. One million people enjoy what we do enough to hit the subscribe button — that’s bigger than many cities!

SZ: Vancouver, Canada — the prettiest part of the country, BTW. Life before YouTube was great; I cooked on TV for about 12 years, have three cookbooks, and a small restaurant in San Diego.

Tubefilter: What sparked your enthusiasm for cooking?

SZ: I literally needed a job. I’d quit as director of operations for a biotech company to try to start a travel show on TV. But 9/11 happened before I could do that…and right after that, no one was buying a travel show, especially from a guy who had barely travelled and had never been on TV. And one morning, I saw a really bad cooking segment on a local news program and thought, Someone needs to do that better. And since I had nothing to do — I went for it.

Tubefilter: What made you choose YouTube as the platform for you to “do that better”?

SZ: My son Max, who was about to enter law school, made the suggestion (probably because he didn’t want to go) and said he could shoot and edit my videos. He’s done that since the beginning.

Tubefilter: What do you think makes your content stand out despite all the noise on YouTube? (Especially in the crowded cooking space!)

SZ: A couple things. First, it’s the production values. There’s a lot of cooking on YouTube, and a lot of it looks just okay from that standpoint. But Max’s work is incredible — and the best part is he’s completely self-taught. Our recent Osaka Street Food episode looks as good as almost any food television I’ve seen. The second is my style — and I’m definitely not bragging, because there’s plenty who don’t like it. If you only want ingredients and the steps for a recipe, you probably shouldn’t watch. But if you want more than that, in an entertaining way, that’s us. We really want you to be entertained, but also learn a lot at the same time.

Tubefilter: How would you describe your overall YouTube strategy? How do you come up with video (and recipe) ideas and keep your audience coming back for more?

SZ: We go for food that generally has only a handful of ingredients and steps, but has big flavors. Life is way too busy to be in the kitchen all day, and you should be able to eat well without it taking forever. So recipes are relatively simple, but still have big, bold flavors. One comment we hear a lot is that we’re “teaching people to cook” — and that makes us smile.

SZ: Really depends. It can be as much as a month to as little as a couple days if necessary. Of course, more time is better.

SZ: Went from about 30K subs in March of 2018 to 1M in August of 2019, and that’s nuts. When we started making our episodes shorter (about 20 minutes now instead of 45 to an hour before) and started making food we thought the audience really wanted, the numbers started going up.

SZ: Max is editing a lot of the time, and it shows. I have a restaurant, am writing my fourth book now, and also do a bunch of food-related work on behalf of big companies, etc. Definitely stay busy.

SZ: When we’re not arguing, we really enjoy shooting episodes. It’s a lot of fun.

SZ: The most important thing is continue giving our subscribers exactly what we think they come for: easy-to-make recipes and our irreverent sense of humor. The goal is showing them it’s not complicated, and they can eat better at home with less fast food, frozen food, and take-out.

But travel is coming up, too. We’ve started shooting a series we’re calling The Top 10 Things to Eat In…We covered London the end of last year, and Tokyo a few months ago. We love YouTube and the freedom it gives us — and the more we can do, the more fun we have.

You can add yourself to the ranks of Zien’s more-than-a-million YouTube subscribers at his channel YouTube.com/SamTheCookingGuy.