Insights: The Future Of The NFL Is TikTok, And Other Hail Mary Passes For Continued Relevance 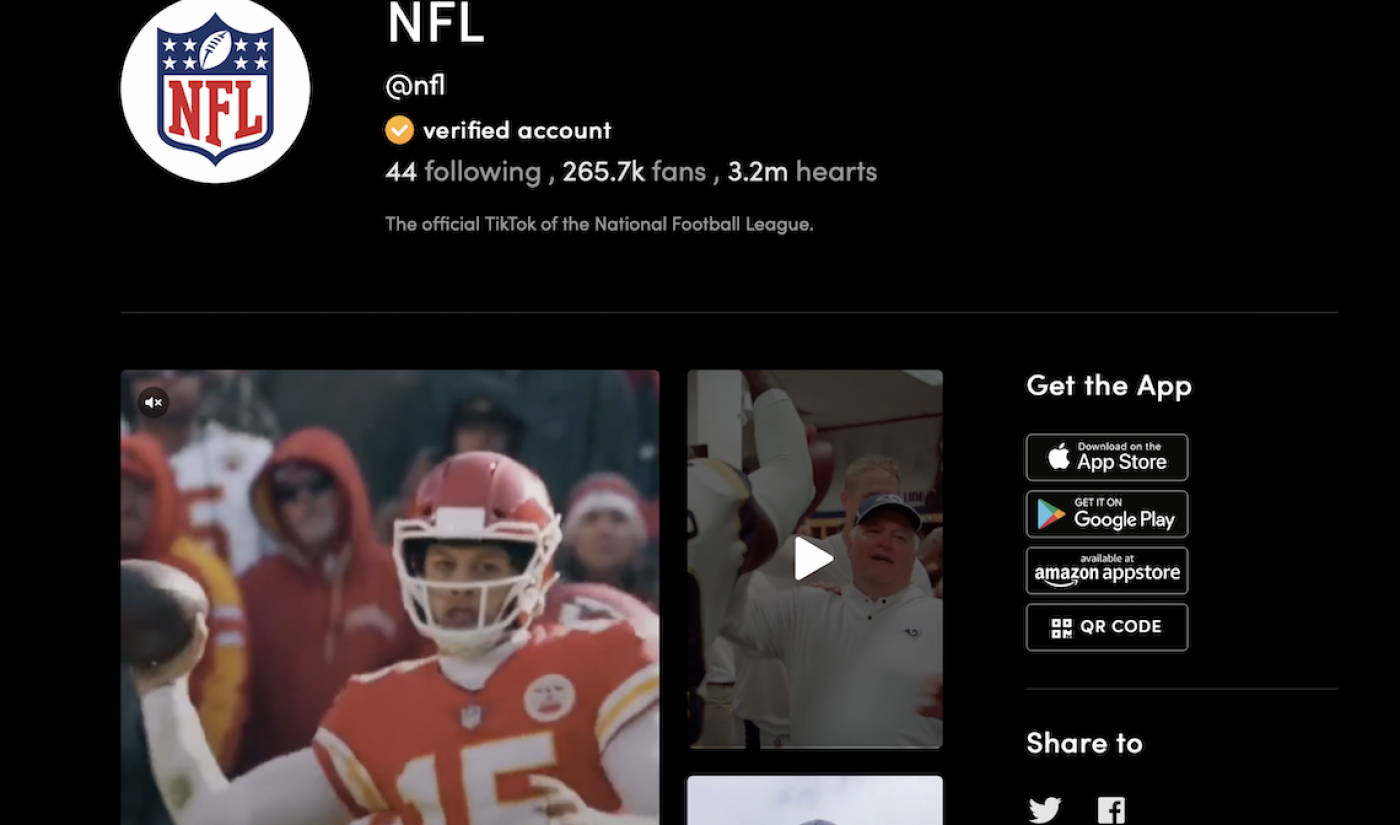 Here’s some novel news: The NFL has placed a two-year bet on TikTok to bolster its fading connection with fans under 25. Excuse me? NFL? TikTok? Since when did karaoke apps from China beloved by pre-pubescent girls translate to large, angry men from the United States smashing into each other at alarming speed?

Since, I guess, this week. It marks the latest odd, perhaps slightly desperate move by old-time/big-time sports organizations to remain relevant to younger audiences who used to line up on the couch alongside their daddies and granddaddies to watch traditional games on traditional TV. In turn, those live games were riddled with endless ad breaks to pay for the immensely expensive broadcast rights that have enriched a generation of supremely talented athletes and, more particularly, their corporate overseers.

The TikTok NFL account has made some minor headway in its brief time online. One smart social gimmick: using #WeReady and a related “song” snippet, a rewrite of “Nah Nah Nah, Hey, Hey, Goodbye,”  to challenge fans to create their own video bit of team love. Another was to remix that viral, vaguely demonic sorority welcome video into its own version, rife with NFL mascots.

The account already has more than a quarter-million followers, who seem to have strong opinions on pressing issues such as whether some team should acquire former All-Pro safety and cancer survivor Eric Berry. Another post features an even bigger tear-jerker, video of a player scoring a long touchdown and breaking down in the end zone hours after his infant child died.

One of the newest posts features a somewhat inexplicable locker-room speech by L.A. Rams defensive coordinator Wade Phillips upon receiving a game ball: “You guys know I love donuts.” These are, I’d venture, different sorts of conversations than you’ll find on most of TikTok’s 500 million accounts.

But as big a number as 265,000 followers is, that herd won’t make much of a difference for an organization that annually stages the nation’s biggest live event/advertising watch party/free concert.

Then again, the league needs to do something. After a rough few years of helmet headaches, CTE-assisted suicides, Kaepernick controversies, and massage mishandling, the league is staring down a future that looks a lot less promising than its past, when it thrived alongside first traditional broadcast and then cable TV, which dominated our attention like nothing else.

Now, that attention is split a thousand ways. People don’t have much patience for endless mid-game ad breaks (unless, like me, you were actually at a game last weekend — USC vs. Fresno State, which at least featured an official who would march on field during breaks with a countdown clock; we need that for TV viewers too).

Traditional sports — which first started losing their hold on America’s youth back when extreme sports surfaced — now struggle to pull kids away from their daily dose of Minecraft and Fortnite (and TikTok and Snapchat), never mind esports tournaments for Overwatch, DOTA 2, and League of Legends.

Indeed, Laura Martin, a media analyst for Needham & Company, wrote that traditional sports and traditional media such as TV, radio, and magazines will all see their audiences of 18- to 25-year-olds erode, thanks to esports.

“One of three kids under the age of 25 is spending an hour a day playing video games. And for every hour you play, you are watching another hour,” Martin told CNBC.

A Long Pass to Jay-Z

I’d probably lump the TikTok move up there with the recently announced, and head-scratching, partnership the NFL just announced with Jay-Z‘s RocNation. The NFL, in a typically grandiose statement, said the partnership was “bigger than music. This is bigger than sports. This is about unifying America.”

Um, yeah. The reception was more chilly than unifying, enough so that RocNation and the NFL just announced $400,000 in donations to two Chicago charities. The donations are tied  to a season-opening free concert Thursday night in the city featuring Meek Mill, Meghan Trainor, and Rapsody, part of a ‘Songs of the Season‘ promotion featuring new music from a variety of artists in coming weeks.

The league has plenty of other questions surrounding its future. One big one lately: that once hugely lucrative Sunday Ticket package that features all the games every weekend around the country. For a quarter-century, the league sold Sunday Ticket exclusively through satellite TV provider DirecTV, now part of AT&T.

AT&T showed this week how little it believes that satellite TV and mobile matter to  its future, naming as president and COO John Stankey, who has been the company’s WarnerMedia CEO. AT&T’s gone Full Hollywood! I understand the sentiment; having attended many movie premieres and several mobile phone conventions, I can safely declare the premiere parties are a lot more fun.

Anyway, speculation is rampant that the league will at least split the exclusive Sunday Ticket rights. Then they’d sell a separate streaming equivalent to some deep-pocketed digital contender, such as Amazon or the aggressive sports-only site DAZN. DAZN already has a similar arrangement in Canada. That sort of deal is indeed where the future is headed for sports. What that means for advertisers, ad agencies, commercial production companies and the league itself is less clear.

Trust me, the NFL isn’t going away soon. But the TV era that made the NFL one of the most successful sports and marketing entities in the world is ending. We can’t see yet what’s replacing it all, especially for expensive live events like traditional pro (and college) sports. That said, I’m not counting on TikTok to carry the next Patriots-Rams Super Bowl. That’s wackier than talking about how much you love donuts.