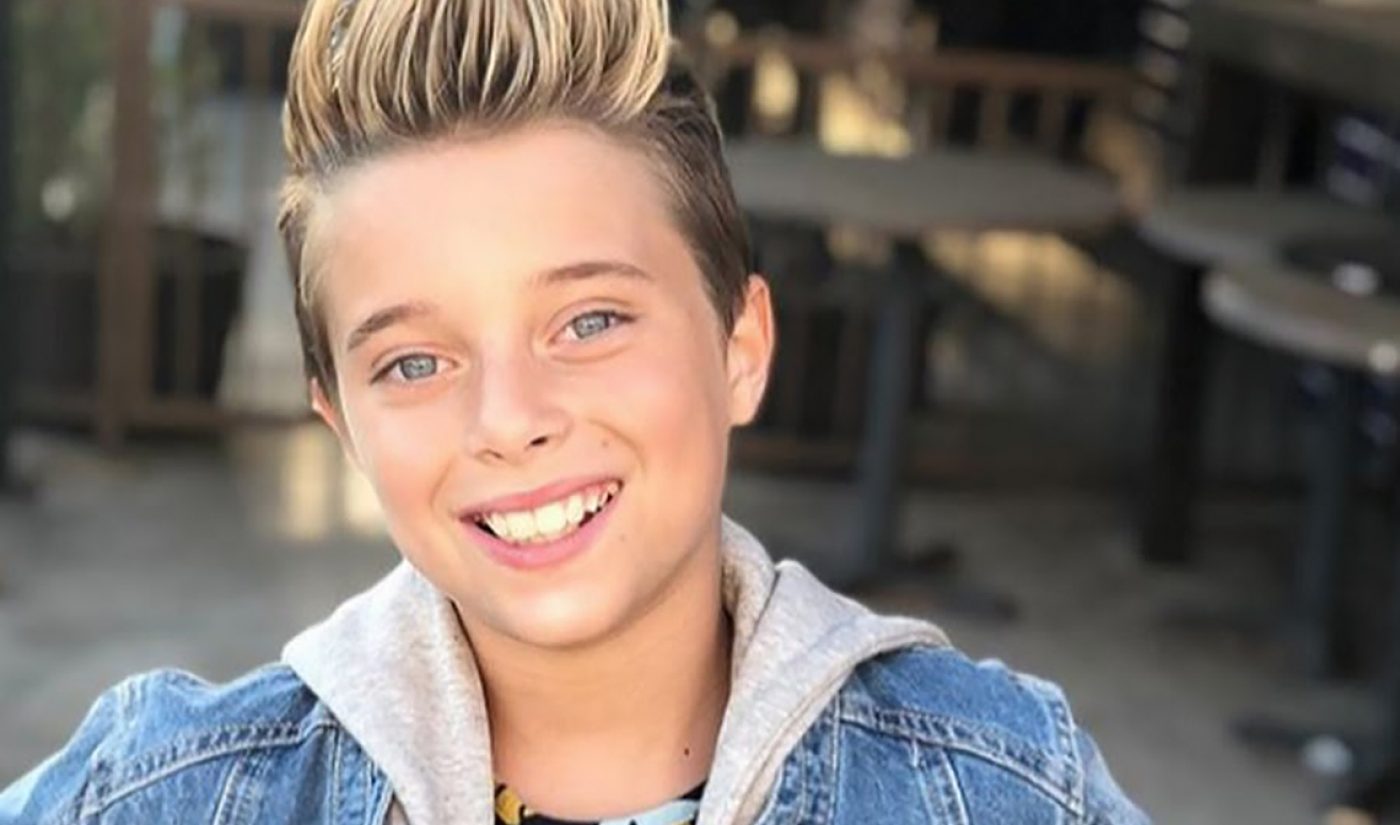 Welcome to Creators on the Rise, where in partnership with Collab, we feature up-and-coming creators whose content is beginning to flourish. Each week, we’ll chat with a creator about why they started making content, what caused their recent explosion of growth, and how they intend to keep that momentum going as they continue to build their audience, their channel, and their careers.

Gavin Magnus was just nine years old when he realized he wanted to be a content creator. Like literally millions of other kids these days, one of his main sources of entertainment was YouTube, but Magnus wasn’t content with just watching other creators’ videos. He wanted to make his own.

Now, however, Magnus’ YouTube channel uploads videos on a consistent at-least-weekly basis with programming that taps into some of the world’s largest video sharing site’s most-viewed trends. Challenges, cash giveaways for impressive feats, and more all bring in hundreds of thousands if not millions of views apiece.

The change in the upload schedule, content, and Magnus’ personal attitude toward his channel has had the kind of impact that’s pushed it up and to the right. That push was also orchestrated by digital talent network and entertainment studio Collab. (Yes, Collab is also the sponsor of this column, but it’s true, and stats don’t lie.) The company began its relationship with Magnus in October 2018, taking on the roles of channel management (including securing brand deals and executing collabs) channel optimization (like creating channel artwork and thumbnails), copyright claims, and promotion for the fledgling creator. At the time, Magnus’ YouTube destination was at around 34,000 subscribers and netting between 70,000 and 130,000 views a month. 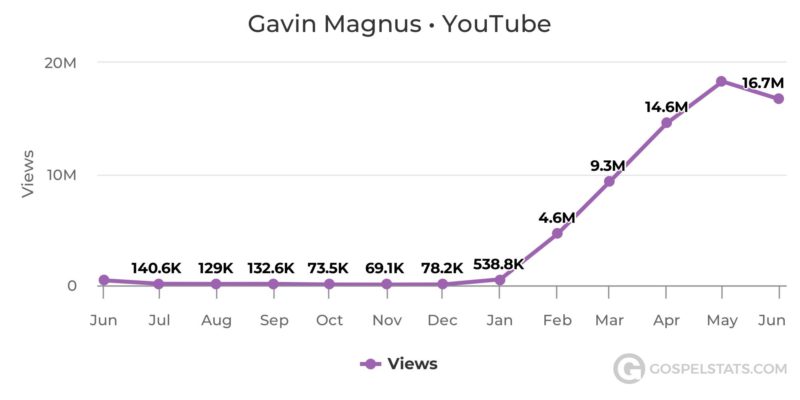 Monthly YouTube views on Magnus’ channel over the past year.

The biggest inflection point in the trajectory of the 12 year old’s thee-year-old channel occurred in January 2019, when he posted his first music video, Crushin. The video introduced YouTube to Magnus’ music, and a lot of viewers to Magnus himself. The video’s since amassed over 13.2 million views and kicked off the dramatic incline you can see in the graph above. It also kick-started Magnus’ budding musical career. He’s on the verge of signing a record deal that’ll see more of his music heading to YouTube in the coming months.

We had a quick convo with Magnus about the above, his recent rise to YouTube, and more. Check it out below:

Tubefilter: So first, tell us a little about you! Where are you from? What else do you get up to in your daily life, aside from YouTube?

Gavin Magnus: I’m from Yorba Linda, Calif. Outside of YouTube, I love skateboarding and extreme mountain biking, and I also am a gymnast. I’m a musical artist too, and have a bunch of exciting music coming.

GM: I started in 2016 with content like puppet videos. After I realized I’d started to build an audience, I bought a few cameras, and then from there, I started doing challenges and pranks — and now it’s taken off.

GM: Honestly, I knew from age nine that I just loved watching Logan Paul and SML, lol. I loved videography and anything to do with that realm.

Tubefilter: Did you come into YouTube with a content strategy and an intended audience, or have you figured it out along the way?

GM: No, I wish in beginning I had come in with a strategy, but I was so young just having fun. Now, I definitely have a calendar and a schedule, and it’s my business.

Tubefilter: This past January, your channel saw a big explosion of growth in both subscribers and monthly view count. What happened?

GM: I made a music video for my song Crushin. That video helped launch my career big time. Now, it has almost 14 million views. It was a game-changer. 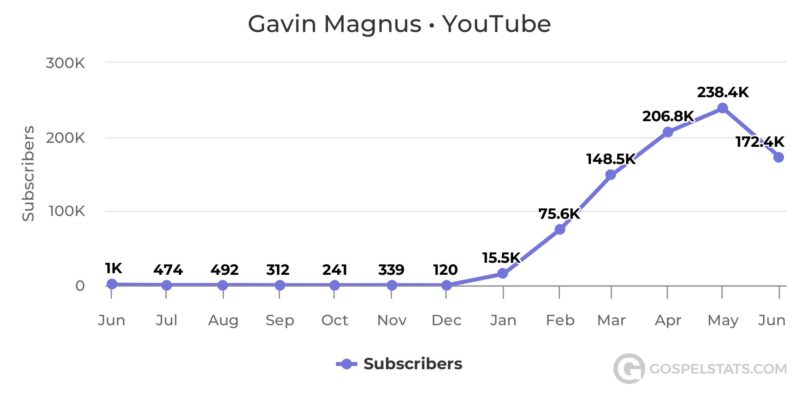 Monthly YouTube subscribers on Magnus’ channel over the past year. These picked up along with the views.

Tubefilter: Are there any creators who inspire you? Any creators you’d like to be as big as?

GM: WOW, so many, but I think everyone knows I’m a big fan of fellow Collab creator David Dobrik. I’m a fanatic, I literally was staying in the same hotel as him, both of us as guest creators, and I just couldn’t wait to meet that one person!

Tubefilter: What plans do you have for the future? Where do you hope you and your channel will be a year from now?

GM: I am signing with a record label and will have a big announcement with that. I also recently signed with a music manager, Andrew Balogh. In a year, my channel will definitely have more music and music videos. In a year, I hope to have my music on the big screen and do more collabs with big creators. I also hope to add more vlog-style content to my channel.

I think in a year, my fans will see a different side of Gavin Magnus.

In the meantime, you can check out my new cover of “Señorita” by Shawn Mendes here!

Collab is an independent digital entertainment studio dedicated to helping creators build careers doing what they love. Launched in 2012, Collab has amassed one of the largest cross-platform content networks in the world, working with and supporting the top talent across YouTube, Instagram, Facebook, TikTok and Twitch. In September 2018, Comscore began tracking Collab and immediately recognized it as a top 10 YouTube partner in the U.S. Collab content currently generates over eight billion views per month.

As one of the global leaders in Digital Rights Management (DRM) and a pioneer in short-form video DRM, Collab works with top content companies like Vin Di Bona Productions, as well as independent content creators and rightsholders, to maximize content owner revenue and protect content rights.

In 2019, Collab announced the launch of their ad sales group, expanding their ability to increase creators’ revenue and partner with brands. At Collab, weirdos are welcome, creators come first, and “funemployment” is promoted.