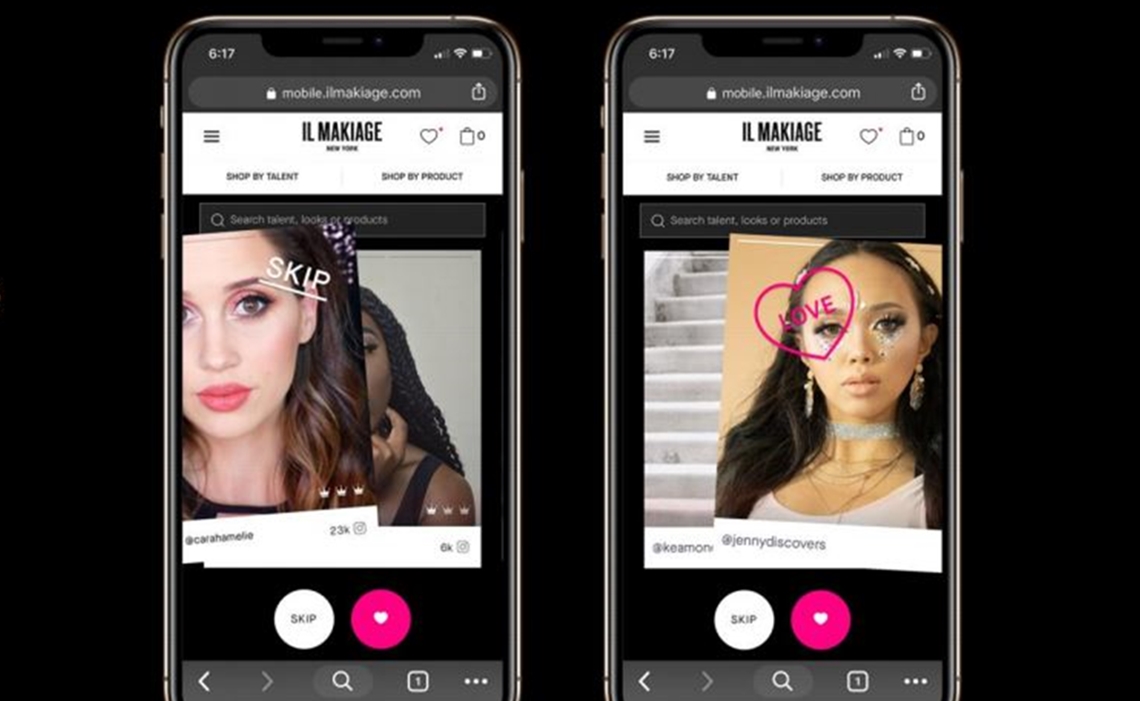 Il Makiage was founded in 1972 by New York-based makeup artist Ilana Harkavi, but is reimagining its digital approach after investment firm L Catterton purchased a minority stake in the brand for $29 million June in 2017. Brother-sister entrepreneur duo Oran Holtzman (who serves as CEO) and Shiran Holtzman-Erel, who had previously purchased the brand, re-launched it in 2018.

Il Makiage’s in-house tech team, which comprises 25 staffers, has been building the new site over the past two years with the aim of solving a key conundrum: consumers typically purchase beauty products offline, given that they prefer to test colors and textures IRL to ascertain suitability. (A study last year Piper Jaffray found, for instance, that 90% of female teens preferred shopping for beauty in-store as opposed to online). Thus, most online purchases for luxury beauty products today serve replenishment purposes.

Nevertheless, Il Makiage recognized that digital platforms like Instagram and YouTube were key to the beauty industry in terms of inspiration and education, and so sought to bridge the digital divide. Additionally, Il Makiage’s new site will feature a try-before-you-buy option, whereby consumers can now select four, full-sized products to be shipped for free for 14 days before committing to purchase. This builds on PowerMatch, a foundation-matching quiz launched earlier this year that leverages machine learning. To date, Il Makiage says that PowerMatch has helped 2 million consumers match their foundation shades with over 90% accuracy.

Rather than putting packaging and product imagery at the center of its new site, Il Makiage will rely heavily on beauty influencers, particularly smaller ‘micro influencers’, who tend to have smaller, more engaged followings than marquee names like James Charles or Jackie Aina. The site will function as follows: First, consumers will swipe — dating app-style — through a series of looks to choose a favorite. Once selected, shoppers can watch a tutorial from one of the hundreds of influencers and makeup artists affiliated with Il Makiage. Viewers can skip to the part of the tutorial that interests them most — eyes, lips, or brows, for instance — and shop for all of the products used on a single page.

Partner influencers, who Il Makiage calls Maximalists, receive up to a 25% cut of any sales they drive, no matter the traffic source. Creator earnings can be tracked via an online portal called Kenzza (see below), which was developed by Il Makiage’s aforementioned tech team. On Kenzza, influencers can upload their looks, tag them with products used, and add run-time cues so viewers can skip around while watching the tutorials.

While it has no immediate plans to do, Il Makiage says it could conceivably license the Kenzza platform to other brands who collaborate with influencers — in the beauty space and beyond. In the travel category, for instance, Kenzza could easily serve as a hub to host hotel room tours by travel vloggers, and also transact bookings.

“Instead of creating videos in-house, we generated a new business model via deep, mutually-beneficial influencer partnerships to showcase their beautiful, creative content,” Il Makiage CEO Oran Holtzman said in a statement. “We believe the platform is the first-ever influencer-based ecommerce platform.”