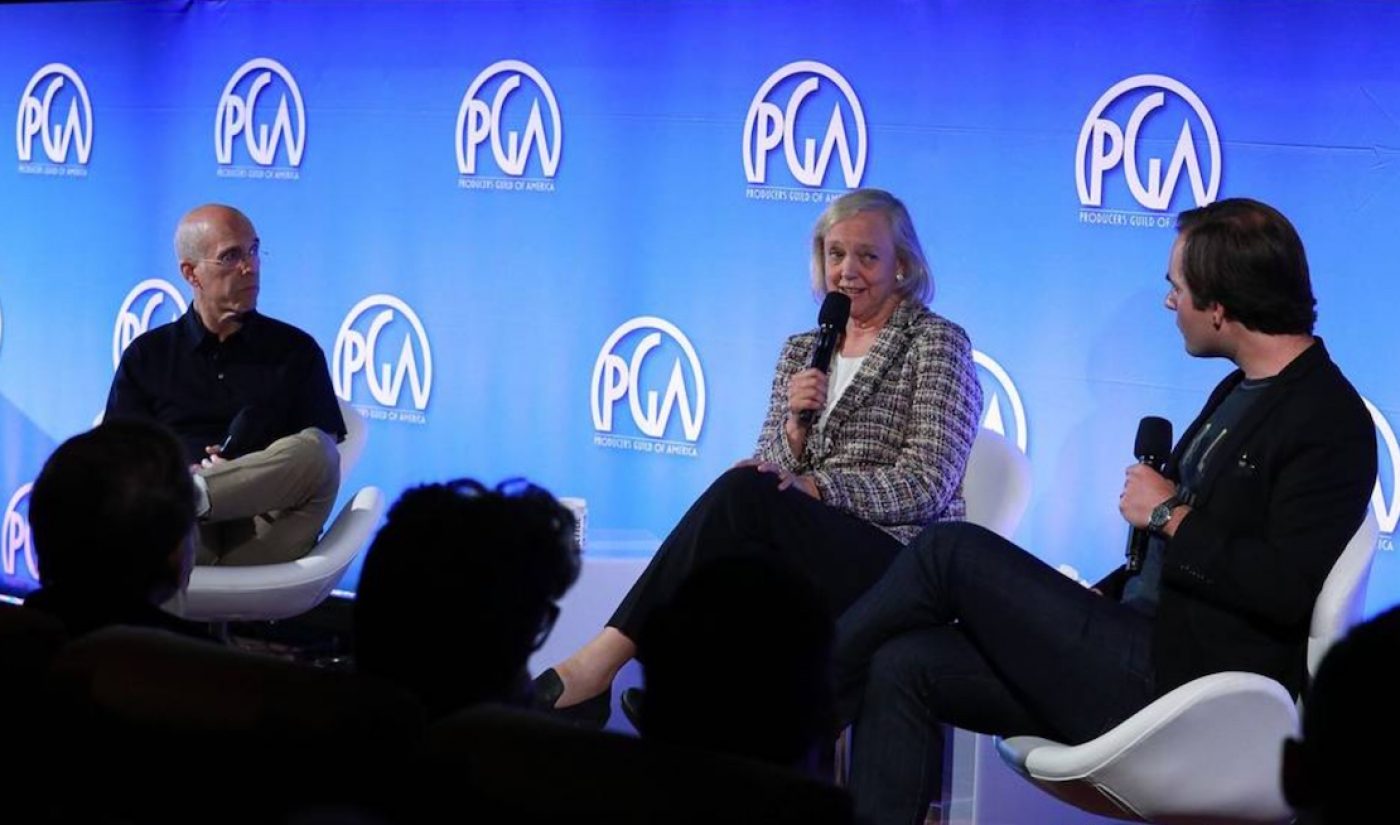 So it turns out $1 billion isn’t quite enough to launch Quibi, Jeffrey Katzenberg‘s expansive vision of the future of episodic short video. This weekend, Katzenberg and CEO Meg Whitman hit the hustings, telling a packed room at the Produced By conference in Los Angeles that they’ll soon be seeking another $500 million.

“We’ve just raised $1 billion,” said Whitman, a former head of eBay and HP, denying recent reports the company would raise a second $1 billion. “But we will go out to the market, in the fall or next spring. We don’t need the money right now, but we will need more to get to break even.”

“It’s not (going to be) a billion dollars, it’ll probably be half,” said Katzenberg, former CEO of DreamWorks Animation. “In the first year, we will spend $1 billion on content. That’s what we’re out there aggressively doing, but (we will spend it) also on the marketing of the platform as well as the content.”

These prodigious sums are a bit brain-melting to consider, as Quibi races to create  7,000 episodes of programming for its first year of operation.  With the big Hollywood creators involved and the money they’re commanding, the company certainly will make a splash.

But as people in the industry keep asking me, is Quibi too big too fail, so stuffed with cash and big-media backers that it can’t possibly not work? Or is it too expensive to sustain itself on an unproven business model, new technology, uncertain audiences, and pricey content? With expensive online-video whiffs such as Vessel, Go90 and Maker Studios in mind (not to mention YouTube Red/Premium/Gaming/etc), I’m inclined toward the latter, though we won’t find out until at least this time next year.

Quibi’s doing everything it can to make sure people know what’s coming. Part of the additional capital would finance a mammoth $470 million marketing campaign, Katzenberg said, supporting an initial release of dozens of shows.

“Our view is we have to launch with a lot of this new form of content,” Whitman said. “You can’t go to Quibi on Day One and see 2.4 shows.”

Katzenberg added that after the launch, the company expects to roll out “25 or 26 pieces of content a day,” punctuated with biweekly releases of higher-profile series they call “lighthouse projects.”

That’s prodigious production slate by Hollywood standards, but barely more than nothing in Internet terms.  On YouTube alone, 400 hours of video are uploaded every 60 seconds. But then again, Quibi is trying very hard to make sure no one confuses it with YouTube.

The appearance at Produced By, one of many recent public talks by Whitman and Katzenberg, courted a room full of producers, all of whom seemed to think they had multiple projects Quibi should buy. Hearing the company’s general deal structure set their hearts and wallets a-flutter.

Katzenberg said the company will pay production costs plus 20 percent up to $6 million per hour for any project Quibi takes. At $100,000 per minute, that far eclipses production spending on just about any YouTube video. Though Katzenberg was careful to compliment the creativity, energy and prodigious followings of YouTube influencers, he said even a high-end project there typically spends no more than $2,000 per minute to produce.

By contrast, Quibi projects will feature lots of big Hollywood names in front of and behind the camera. Not only will those big names get paid well, after a few years, the projects revert to their ownership, so they can resell the work overseas or anywhere else.

Part of what makes Quibi “a new type of content,” Katzenberg said, is the way the company is rethinking how people create and consume mobile video. The app-based approach allows Quibi to improve that often-mediocre viewing experience in a number of ways.

In part, that will be because of premium projects that are explicitly made for the medium. Filmmaker Antoine Fuqua (Training Day, The Equalizer movie) is finishing a $15-million project called #Freerayshawn, and starring Stephen James and Laurence Fishburne.

Quibi will get a 2.5-hour-long movie cut into 15 10-minute “chapters” that can be released one at a time.  But Fuqua also will be able to recut the episodes into a full-length feature.

“The way the model works, so when Antoine goes to produce the show, there will be two shows,” said Katzenberg said. “The one for Quibi is ours for seven years. He’ll also cut together a long-form version. After two years, he owns it free and clear and can sell it anywhere in the world.”

The service will be both ad-supported and require a subscription of $4.99 a month (an ad-free version will cost $7.99 per month). Ads will be brief, 6- to 15-seconds long depending on the length of the video they’re attached to, and will total a relatively light 2.5 minutes per hour. Advertisers, Katzenberg said, were enthusiastic about the potential to make those ads episodic too, essentially telling a story in a progression of ads attached to each episode of a given series.

Will it all pay off with a sustainable new media company? It’s difficult to see how Quibi does that,  especially if it’s adding another nine-figure obligation to its bottom line.

Then again, maybe a massive marketing campaign will goad millions of people to pay $60 a year to watch well-made video on their phone while in line at the grocery store or riding the subway. Heck, at this point, it’d be nice if the campaign could just teach people how to pronounce Quibi.