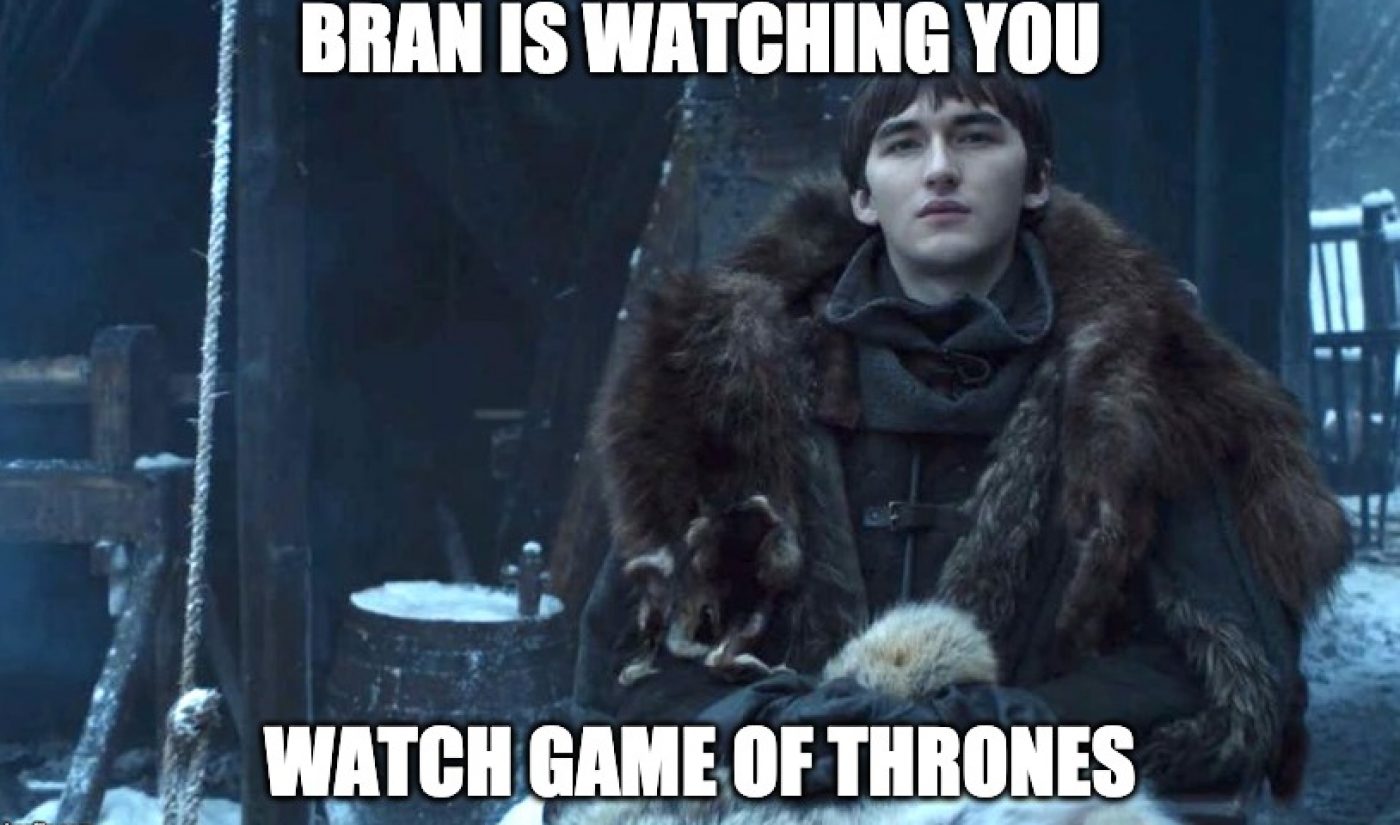 Game of Thrones has been part of the zeitgeist for its entire run on HBO. But in the middle of its final season, the show has never been more popular, especially if you consult social video.

Tubular Labs measured video views across popular social platforms (including Facebook, YouTube, Twitter, and Instagram) and found videos created around Game of Thrones content (comprised of owned, media and user-generated videos around the show) has been collecting nearly 100 million views per day since the beginning of April.

Video views peaked around the April 14 Season 8 premiere and have continued since, with high points occurring immediately after each new episode. The most views for social videos around the show came the day after that premiere — with nearly 264 million views across platforms on April 15.

While YouTube content is getting more views (1.2 billion in total for the 30-day stretch of April), Facebook’s close behind at 1 billion. Game of Thrones has certainly owned its own conversation on social video, with four of the top five most-viewed accounts coming from HBO owned-and-operated channels. But LADBible is one of several publishers to also generate audience interest around the show (with videos like “Game of Thrones Stars Face Swap Challenge” and “Dogs React to Game of Thrones“). The U.K.-based company is third among all social video creators with 53.2 million views from Game of Thrones content — on just 16 uploads.

Views around Game of Thrones videos come from all over the world as well.

While 32% of views are from the United States, Brazil (11%), United Kingdom (5%), Germany (4%), and France (4%) also make up some of the largest audiences of Game of Thrones content by percentage. International publishers outside of LADBible have also generated a lot of views. Hong Kong’s 9GAG is one of the top 10 video creators around the show for the time period with 21.5 million views on Facebook alone. Two separate Hispanic-focused Game of Thrones accounts (HBO Game of Thrones LAT, Game of Thrones Latino) combined for over 40 million views in the stretch.

But perhaps the most interesting entry among the top 20 Game of Thrones creators was Tasty, which accumulated 14.7 million views with just three videos — all based on food and drinks around the show.

The start of Season 8 put the show just outside the top 50 cross-platform U.S. entertainment creators for April — United States-based creators tagged with “entertainment” as a primary genre across YouTube, Facebook, Instagram, Twitter. And it’s gained the third-most subscribers/followers since April 1 of any U.S.-based entertainment creator. Game of Thrones channels gained a combined 3.9 million subscribers in the month (roughly 700,000 on YouTube, 500,000 on Facebook, 2.1 million on Instagram, and 600,000 on Twitter).  Trailing just the incredibly popular MrBeast and Marvel (which had some help from the release of Avengers: Endgame, of course), it’s impressive growth for a single show. Nearly all of the rest of the top 10 (in terms of subscriber growth) are larger media properties, including Ellen and the Late Late Show with James Corden. Figures like that speak to the level at which Game of Thrones can motivate audiences and the culture at large — despite airing far less frequently than those programs.

Given the momentum already on display, it seems inevitable that Game of Thrones will continue its rise and own the May conversation as well with little competition for large-scale cultural relevance at the moment. With the show’s final episode set to air soon — on May 19 — there’s bound to be a whole lot more content coming too, in the form of previews, recaps and other fan theories. Undoubtedly, a whole lot of people will be watching.