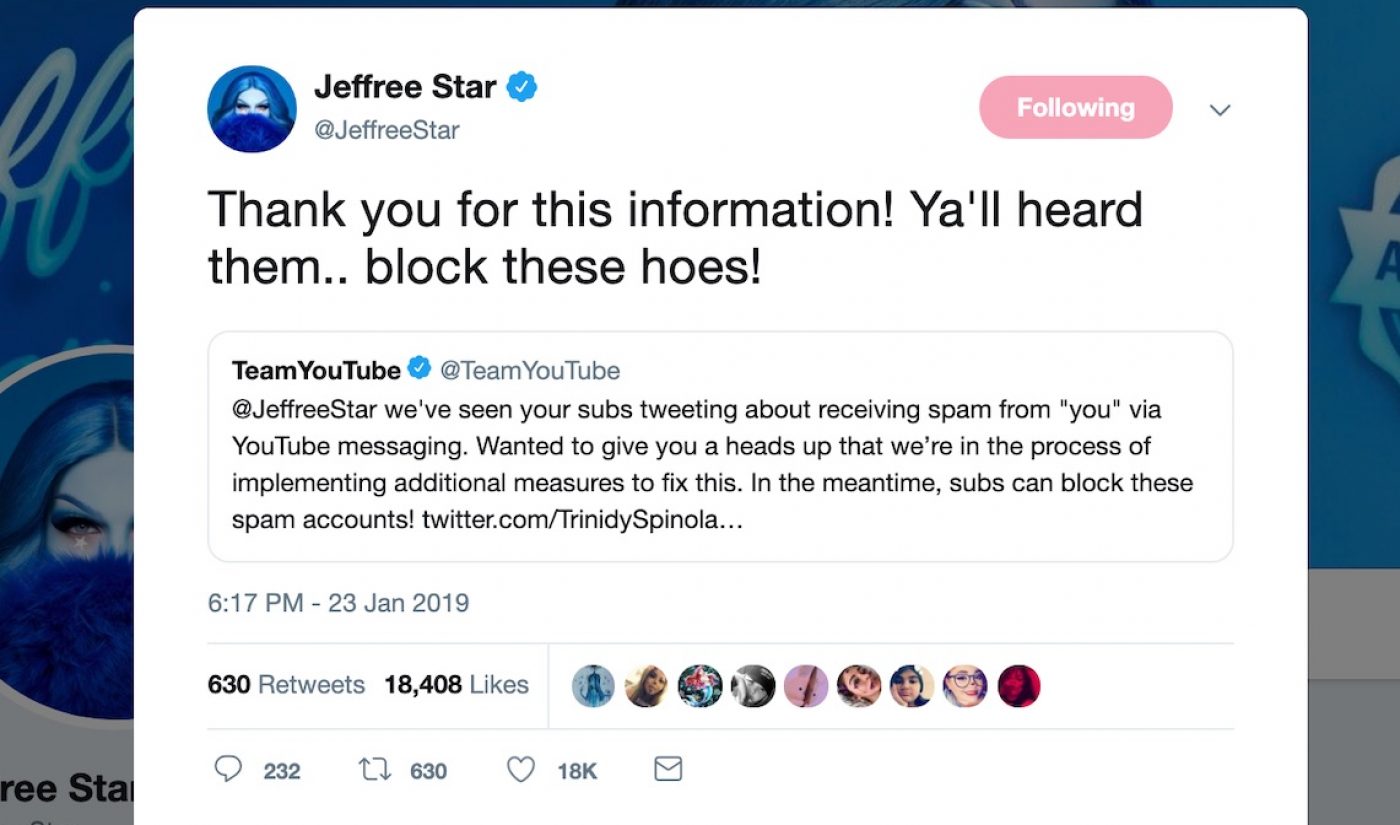 When YouTube experienced a brief global outage lasting nearly two hours last October, prompting tongue-in-cheek outcry from top creators and the viewing community at large, the TeamYouTube Twitter account — which is charged with addressing technical support across the platform, as well as YouTube’s Music and TV products — quickly sprang into action.

TeamYouTube, which currently counts 634,000 followers, was out with a tweet about the outage four minutes after the issue arose. And members of the Twittersphere were clearly impressed by the company’s near-immediate attention and well-timed updates: On that day alone, TeamYouTube gained an additional 50,000 followers, says Julie Currie, who serves as a key strategist on the Twitter account.

That’s just one small example showcasing the way YouTube has allocated more resources to its Twitter support efforts – and how it has become an essential touchpoint in the platform’s relationships with its many audiences – over the past two years.

Following the onslaught of the initial Adpocalypse, YouTube made transparency and communication a major priority to better assuage concerns from creators, viewers, and advertisers. And in her most recent quarterly newsletter, CEO Susan Wojcicki affirmed that the company had made notable headway: response output across all of YouTube’s social media accounts (of which Twitter is the largest) had grown by 150% year-over-year, she said in February, and response speed had increased by 50%.

YouTube Twitter is more active than ever tbh, and not only helping big names. I see tweets YouTube replies to smaller YouTubers everyday. So that’s good.

All told, YouTube operates 30 corporate Twitter accounts, including local handles like YouTubeIndia and YouTubeArabia — though TeamYouTube is the only handle that doesn’t fall under the dominion of the company’s marketing arm. (It sits within the support team). TeamYouTube also works in close contact with two other prominent accounts: the flagship YouTube handle, which is dedicated to amplifying the YouTube brand and highlighting noteworthy content, and YTCreators, which provides inspiration, promotion, and best practices advice for creators.

In yet another sign of the way in which YouTube is doubling down on social support, the company has brought all of its handles in-house, after previously working with outside agencies like Big Spaceship on certain Twitter accounts in the past.

“As conversations with YouTube creators and viewers moved to social, we shifted our social efforts to be focused in-house across the board,” Marion Dickson, YouTube’s director of global social media, tells Tubefilter. “Social is an incredible source of feedback and being on the front lines and hearing firsthand from YouTube creators and viewers has enabled us to focus our efforts on responding more quickly, invest more in our resources, and highlight our diverse ecosystem of creators on the platform.”

Scaling to 20,000 monthly replies with a human touch

Since 2017, TeamYouTube has significantly ramped up hiring and sought new ways to communicate with followers. What started out as a “handful of people” working out of the company’s San Bruno offices, Currie says, has grown into a team of more than 50 staffers in several offices worldwide who are working 24/7 to quell issues in eight different languages.

The team comprises community managers who pen responses, tech staffers who are tasked with building operational tools, and other members who oversee the workflow.

And contrary to some speculation that bots are at work on TeamYouTube — given that many responses to similar questions can sound eerily repetitive — all of the account’s 20,000 monthly replies are crafted by human beings. This is a fact that Team YouTube has cheekily pointed out before on Twitter:

Despite its massive reach on Twitter, YouTube is currently endeavoring to bring more of its support efforts onto self-owned properties. To that end, earlier this month, the company debuted a brand new YouTube series — on the newly-rebranded TeamYouTube channel, which was formerly known as YouTube Help — titled TeamYouTube Monthly Roundup. That series, hosted by two TeamYouTube staffers named Daniel and Abby, takes a look back at past hiccups and how they were addressed.

“One thing we’re looking into that I’m super excited about is testing Stories for known issue updates,” says Jordan Esparza, who works alongside Currie as a key strategist on TeamYouTube. “It’s a super lightweight and timely format, and it expires — just like a known issue does.” Esparza adds that the company also wants to host more real-time Q&A’s with YouTube product managers via Stories, given that it has a convenient a ‘reply’ feature.

While TeamYouTube addresses myriad issues, the five most common issues that it is responding on any given day are: monetization, policy, copyright, subscriptions, and notifications, says Esparza — with the majority of technical issues being due to user error.

That said, as it moves toward greater transparency, TeamYouTube is also experimenting with Tweeting more proactively about new product and feature experiments — such as when it preemptively warned users in February about a forthcoming change to the way it doles out Community Guidelines strikes.

“Sometimes we’d seen negative reaction to new product or feature experiments, especially when we’re not proactive. And the sentiment is usually ‘Why didn’t I know about that?'” says Esparza. “Obviously, we can’t be proactive about every single experiment, but we’ve actually seen more positive sentiment and less questions afterwards when we’re able to share those types of things ahead of time.”

Since Jan. 2017, says Currie, TeamYouTube’s response output has grown eight-fold, followers have grown by a multiple of five, and Twitter tags (which is when users specifically call out the @TeamYouTube in their messages) have increased ten-fold — all organically. And to help it become more productive, the team has also harnessed machine learning technology — a customized version of Salesforce, to be precise — that can locate pertinent tweets even when they’re directed at other handles based on keywords, all while simultaneously getting rid of any concerns that aren’t support-related.

📢 Starting Feb 25th, we’re updating the way we give Community Guidelines strikes. Here’s what to expect:

At the end of the day, however, philosophically speaking, TeamYouTube sees its role as similar to other customer service accounts on Twitter — though slightly different given that it’s seeking to redress the concerns of both its consumers (viewers), as well as creators, who are business partners of sorts.

“Providing support to a viewer is different than to a creator because creators may have diff support options available to them,” Esparza says. “While what we do is similar to what other handles do, we don’t really aim to go super one-to-one in our social interactions. We don’t go into account details, and try not to take issues into DMs if possible. We really see ourselves as working to scale responses and provide help for the community at large.”