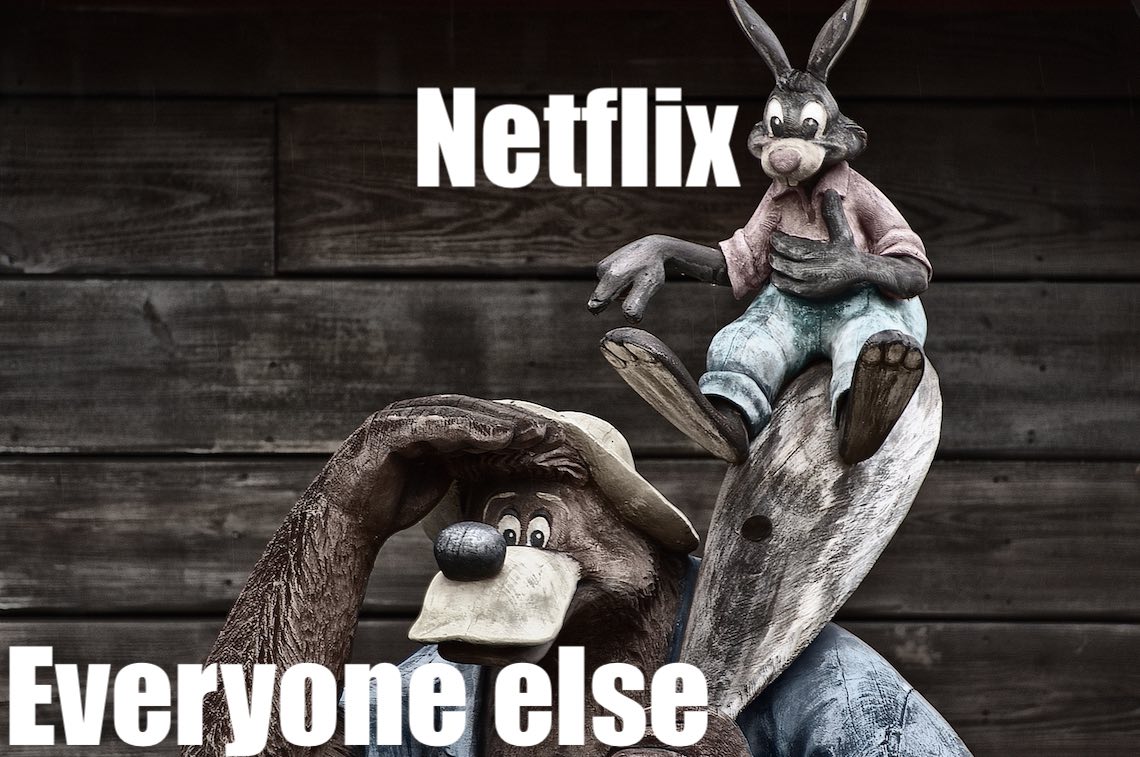 Insights: What Netflix Says You’re Watching When You’re Not Watching Netflix, And Why It Matters

Netflix is really big, and getting bigger. Just last quarter, it added nearly 10 million more subscribers around the world, plumping it up to nearly 149 million paying accounts. And yet, while announcing these numbers in its quarterly earnings call last week, Netflix made a point of showing how small it is, at least compared to some other big users of the world’s mobile video bandwidth.

Executives At Netflix: We’re Small and Still Crushing It. Look at this Chart!

So what else are we watching on our smartphones besides Us and Umbrella Academy, Triple Frontier and Stranger Things, Kingdom and Bird Box? Here’s a handy chart of everything else, based on data from networking-equipment maker Sandvine, that Netflix included in last week’s letter to shareholders.

Taking a look at these numbers, it is indeed appropriate that the Netflix “call” – the throwback term for the quarterly virtual gatherings of journalists, analysts and others who listen in as top corporate executives put the best face on their company’s latest numbers – was actually a live stream on YouTube. As the chart shows, YouTube is the single largest devourer of mobile traffic and your attention, eating up an astonishing 37% of the world’s bandwidth.

The chart offered succor to the long-suffering shareholders of another digital darling, Snap. Who knew that the often-troubled, possibly recuperating Snapchat eats up nearly 1 in 12 bytes of global mobile video traffic?

As well, various parts of the Facebook empire  – Facebook, Instagram, WhatsApp – collectively eat up another 20.3%, putting them just a few percentage points behind “Other.” “Facebook Video” is part of that 20.3%, at 2.5% just ahead of Netflix.

It’s discomfiting to ponder the possibility that more people are watching “Facebook Video,” i.e., Facebook Live and Facebook Watch, rather than, you know, actual shows of decent to excellent quality. Then again, as the cranky misanthrope H.L. Mencken rightly observed decades ago, no one ever went broke underestimating the intelligence of the American public (or in this case, the rest of the globe).

More seriously, phones are where we consume a lot of content. Netflix is figuring out how to make more content that works there, and works in more parts of the world. Its mobile-friendly short content includes projects like the 15-minute comedian showcases it has commissioned and also turned into audio content on Sirius-XM. And the company is seeing most of its growth overseas, instead of just in the United States.

Competing By Not Worrying About The Competition

That’s why Netflix spent a significant amount of its earnings day telling everyone that neither it nor its future competition are a big deal in this global marketplace. I, and at least some analysts, tend to agree with them.

“We don’t think Disney Plus and other OTT services coming will hurt Netflix too much,” said Macquarie Research analyst Tim Nollen in a research note.

Indeed, when asked about Disney and Apple, Netflix CEO Reed Hastings sounded a bit like the trickster Brer Rabbit, begging please, please not to be thrown in the briar patch, where of course the rabbit had lived his whole life.

“Great competition makes you better and so we’re thrilled to have Apple and Disney in,” Hastings said. “They are awesome companies and just to be in the same league as them is very exciting for us.”

Exciting indeed. But as Hastings noted, there’s already “a ton of competition out there and Disney and Apple add a little bit more, but frankly I doubt it will be material because … there’s already so many competitors for entertainment time…”

Netflix has been sounding this particular trope for a while. The previous quarter’s shareholder letter noted that, in the battle for attention, Netflix is far more likely to run up against, and lose to, Fortnite, with its 250 million registered users. It’ll be a while before a video offering from Disney or Apple has anything like that scale or intensity of user devotion.

In some cases, this all may be expectation setting, helping investors understand that we’re now in a very different, far more complicated entertainment universe, especially on mobile, especially elsewhere around the globe, where Netflix will see most of its future growth.

Does A Global Netflix – With Localized Content, Format Ambitions, and More – Even Have Real Competitors?

Overseas, the desktop matters less and less and users are doing just about everything on their phones. That has a lot of implications for anyone venturing into video with big ambitions.

“We sort of see this broad landscape of competition and our job is to think about every touchpoint that we have with the service and how can we make it incrementally more compelling,” said  Greg Peters, Netflix’s chief product officer. “How do we connect our members with the amazing content that we’re making in a way (that) is new and differentiating?”

This is where the Netflix purchase of a lot of overseas content really starts to matter. Netflix has seen great success in many markets with shows such as South Korean hit Kingdom (intriguingly described as “a period piece with zombies”), India’s Reign, and the Spanish-language Durante la Tormenta​ (aka ​Mirage)​. Those shows are proving they have legs with audiences far beyond their home countries, helped by Netflix investments in subtitling, dubbing and other tactics to make them more accessible beyond their home country or language.

That approach, Peters said, “opens up (audiences) to watch TV shows or movies from around the world, from countries that they never would have conceived of doing before.”

Another tactic is localizing content, creating local-language versions of unscripted formats like cooking competition Nailed It!, for instance. Those approaches give Netflix a stronger chance to compete not only against Disney and Apple, but also Fortnite, YouTube, Facebook, Snapchat, and everything else we dive into daily on our phones, wherever on the planet we are.

In an increasingly mobile, global world of entertainment, that’s the real briar patch Netflix is hopping into. You can see why Hastings is so “excited” to have big competitors like Disney and Apple. It’ll be fascinating to see if those two companies and all the other streaming-video challengers from Hollywood and Silicon Valley can find their way through those same thickets.

Pretty cool photo of Brer Rabbit (which – in this iteration – is a Disney property, btw) by Joe Penniston.