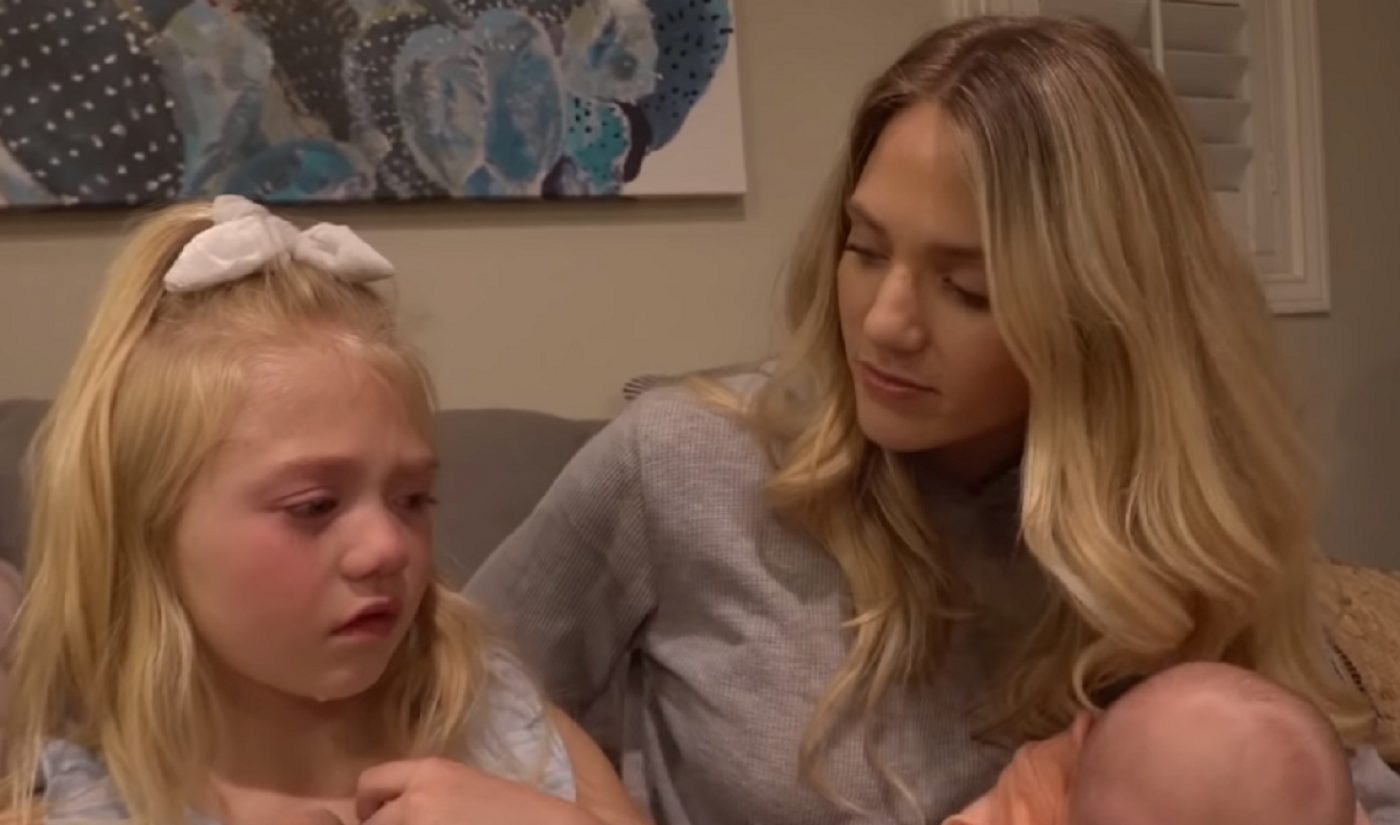 Popular Christian family vloggers Cole and Savannah LaBrant are facing criticism after they tricked their elder daughter, Everleigh, into thinking they were giving her dog Carl away.

The couple, who vlog about their daily lives with Everleigh and their newborn daughter Posie, run the LaBrant Fam channel on YouTube. The channel has 8.9 million subscribers and nets between 90 and 100 million views each month. They also have large followings on Instagram: Savannah counts 5 million, Everleigh has 4.3 million, Cole has 4 million, and Carl himself has 759,000 followers.

Cole and Savannah revealed the stunt in their April Fool’s day video, called We Have To Give Our Puppy Away… Saying Goodbye Forever. The video at first seems like one of their usual multiweekly vlogs, but around halfway through, it cuts to a shot of six-year-old Everleigh lying with her face pressed into their couch. Cole asks Everleigh if she wants to tell viewers what’s going on, and when she refuses, he turns the floor over to Savannah.

Savannah explains, “Basically, we’re giving Carl away to somebody else because we feel like we can’t take good enough care of him at our house.” While cuddling a crying Everleigh, she offers up a few reasons for abandoning Carl, saying the family often isn’t around to let him outside, so he makes a mess in the house, and that she and Cole are worried because Carl is small enough to slip through the property fence at their new house.

The segment goes on for about three minutes before Savannah relents and tells Everleigh it’s a prank for their April Fool’s video. Everleigh breaks down crying again, and both parents express surprise that she actually fell for it and believed them. The rest of the video chronicles Everleigh’s revenge prank on Cole.

Cole and Savannah seemed to anticipate there would be backlash against the video. At the end of it, Savannah turns the camera on herself and tells viewers, “If this offended any of you guys, she’s okay. She was crying for like two minutes and she’s the happiest kid ever now, and she totally doesn’t care. We prank each other all the time.”

Her explanation, however, didn’t mollify people on social media. BuzzFeed News documented a number of comments left on an Instagram post of Savannah’s that now appears to have been deleted.

“You[r] April Fool’s video is textbook emotional and psychological abuse,” one commenter wrote. “Your child trusts you, and you lied to her simply to make her cry while you filmed. Please take a step back, and rewatch it. I pray you find some clarity, remove the video, and promise your daughter that you will work your hardest to regain her trust.”

“Do you think Jesus would like you playing a cruel April Fool’s trick on your daughter?” another wrote. “It’s always religious people who act the least like Jesus would.”

Twitter users also had plenty to say about the couple’s actions.

YouTube culture is so gross. These people are famous; think about what must be happening under the radar to kids with parents trying to “make it”

YouTubers Cole And Sav Pranked Their 6-Year-Old By Pretending To Get Rid Of Her Puppy And People Are Furious https://t.co/Qv8shZwuB0

They also traumatized a young child by saying their giving him away. She was in tears and all sav and Cole did was laugh and ask why she was crying. She was crying because she thought they would take her dog away. 2/2

cole and sav are nightmares

I don’t get angry at much online, but this crosses the line. What kind of sick parent tells their (5-6 year old?) kid they’re giving away the dog as an April fools prank, let alone posts it online for millions on the internet to see? https://t.co/qk6dh3WW5j via @stephemcneal

Some people want to be famous & don’t care how they get there. Kids are just one of their accessories. I don’t let my kids watch Cole & Sav. They also have this pseudo-Christian thing going which is a shield for them to use to avoid backlash for how much they use kids as a prop.

Hope whoever Cole and Sav are make enough money from their youtube job to pay for their daughter’s therapy!

Next Prank That Follows: Child Protected Services show up at the home pretending to take Everleigh away from them.

Didn’t think Cole and Sav would be that emotional about having their daughter taken away from them.

The LaBrants haven’t responded publicly to the criticism. Comments on their April Fool’s video are disabled, but so are comments on most, if not all, of their other videos.

This is not the first time Cole and Savannah have been in hot water for producing exploitative content. Last August, when raging wildfires threatened the homes of many Los Angeles-based YouTubers, the couple posted a vlog claiming they’d received an order to evacuate. In the vlog, they documented their supposed hectic escape from the fire, as well as their subsequent family vacation in San Francisco. After the vlog went live, the LaBrants’ neighbors said they’d never received an evacuation order, something BuzzFeed confirmed using the National Wildlife Coordinating Group’s website.