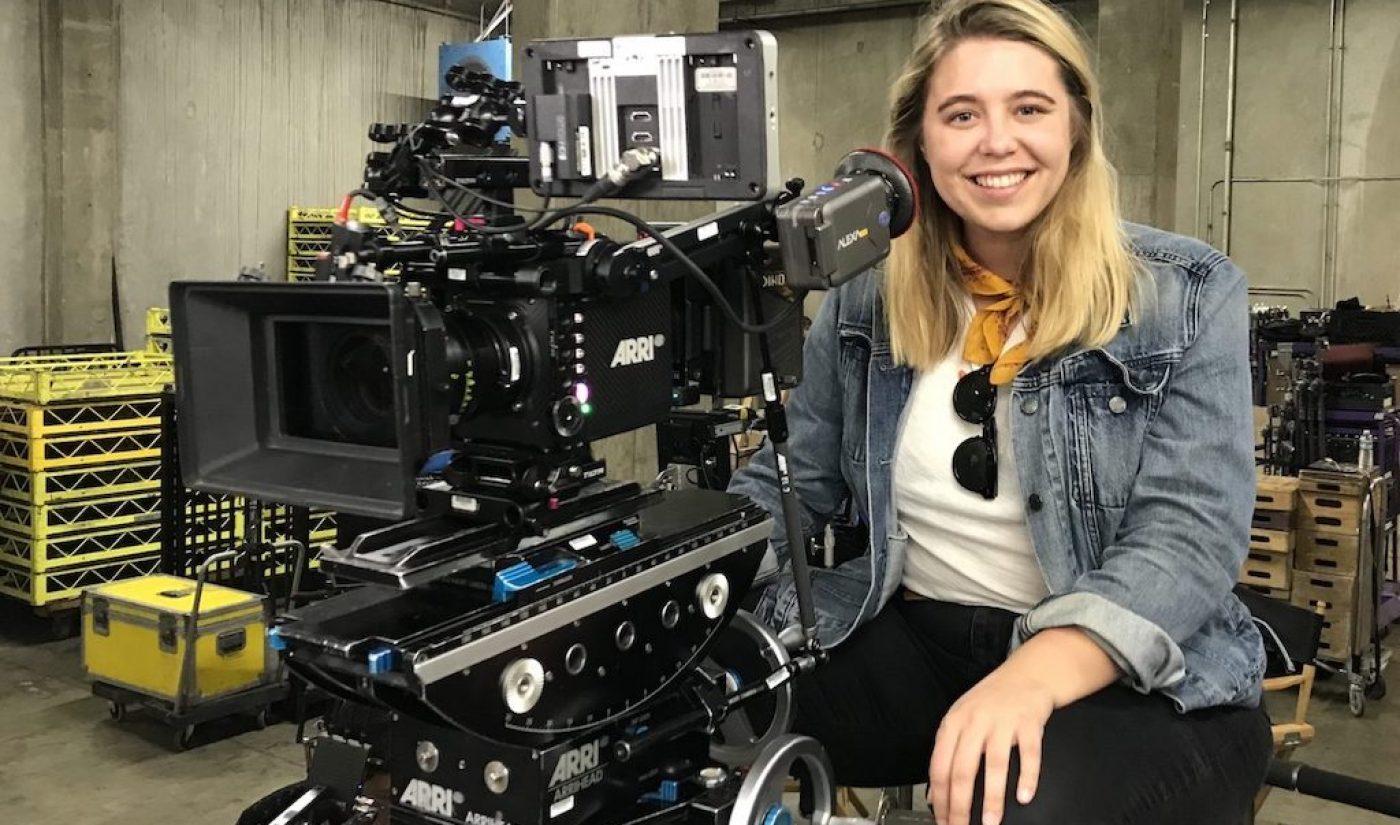 Rylee Jean Ebsen, who helped create many of Snapchat‘s ads, promos and original content – and even some of the technical production processes of vertical video – has left the building after seven years at the social-media platform.

She’s not going far, about five miles south of Snap’s new headquarters by the Santa Monica, Calif., airport, to the sleek offices for Big Block, a Los Angeles-area creative-services company with decades-long ties in the automotive business. These days, it creates advertising and motion graphics for big clients such as Toyota and ESPN.

Turns out that what Ebsen really wants to do is direct. The new job will free her to do just that after occupying a variety of video- and marketing-related roles with Snapchat.

Now she’ll direct and be a creative consultant on a wide range of Big Block TV commercials and other projects, trying like her grandfather to transform the advertising business at another time of vast change and new distribution platforms.

A Product of Madison and Vine

“This is a transformational time for advertising and Rylee is a trailblazer in inventing and executing new concepts,” said Big Block’s Live Action Executive Producer Jennette MacLachlan. “Her experience at one of the top social-media platforms gives her a unique understanding of storytelling and advertising in the digital landscape.”

Ebsen is a double scion of Hollywood royalty. One grandfather was long-time actor Buddy Ebsen, best known as the star of 1960s and 1970s TV fixtures The Beverly Hillbillies and Barnaby Jones.

Her other grandfather was satirist Stan Freberg, whose many-faceted career pioneered the use of self-aware humor in early TV commercials. (For some fun brain food, check out some of YouTube’s collections of his classic TV commercials.) Freberg also created a string of popular comedy records, radio shows, books, and much else from the 1950s on.

Freberg’s TV commercial work has been an inspiration for many in the business. Now his granddaughter is following his footsteps. She’s already been using his work as inspiration for her Snap work.

In talking with her, Ebsen mentioned a famous American Soups spot featuring Ann Miller as a housewife who, when asked what’s for dinner, shucks her dress to reveal a sequined leotard. She then kicks out a Busby Berkeley-style routine, replete with chorus line, and giant soup can. At the end, Miller dances back to her kitchen and the arms of her husband, who cracks, “Emily, why do you always have to make such a big production out of everything?”

Ebsen used that wacky sensibility when she create a piece. announcing the debut of Snapcash. She persuaded Snapchat to hire writers from the TV show Glee, and created a piece with the same fun, glitzy, tongue-in-cheek sensibility.

“I’m drawing inspiration from him all the time,” Ebsen said of Freberg. “It’s been really fun.”

Seven Years at Snapchat and Trillions of Views

Ebner went to Santa Monica’s private Crossroads High School (it’s a couple of miles from Snap’s HQ) with Evan Spiegel, where they were both part of the Newspaper Club. Spiegel later went off to Stanford, and co-founded Snapchat in 2011 with two classmates. By then, the younger Ebsen was studying filmmaking at NYU’s Tisch School of the Arts.

She reconnected with Spiegel in her junior year, and soon was creating Snapchat promotional videos, including co-directing its first broadcast spot, even while finishing her last year at NYU.

After getting her degree, Ebsen joined Snapchat as Employee No. 31. She was lead creative on, among other things, videos debuting notable Snap initiatives Snappables, World Lenses, Custom Stories, and Spectacles, and an augmented-reality project with artist Jeff Koons, She also directed the company video for its investor road show when Snapchat went public in 2017, and its 2018 voter registration video, produced on smartphones in vertical format.

Over seven intense years, Ebsen said she learned a lot of about creating and directing videos, especially in the mobile-friendly vertical format that Snapchat helped popularize in social media and related advertising.

That portrait format approach may not be as transformational as, say, some of the visual vocabulary of film (and in turn, TV) developed by directors such as Sergei Eisenstein or Orson Welles in the first half of the 20th Century. But as mobile increasingly becomes the dominant way billions of people routinely create and consume all kinds of content, Snapchat’s single most lasting creation may be empowering vertical video.

Ebsen also created plenty of content in traditional horizontal format, for  more traditional outlets such as TV and YouTube. All told, her Snapchat videos have garnered more than 40 million YouTube views. She estimates, possibly seriously, that the content on Snap has been seen “trillions” of times. That’s a lot of looking.

Vertical Video as an Evolving Form of Art and Advertising

One vertical-format innovation that Ebsen said she’s particularly proud of is what she calls “comic-strip editing.” It involves placing one character in the screen’s top portion, with reaction and other shots stacked below, much like panels of a comic book might be stacked on the page. As action unfolds in a scene, new materials can swap into each section as necessary.

“We really had to think of vertical as a whole new format,” she said. “It’s really hard to break your (impulse) to create something in a horizontal format. But you have to see how (users) are moving through mobile content. It’s really important when you’re thinking about how you make mobile content. We definitely need to have more experimentation with vertical storytelling.”

More generally, she said, companies and creators making video of any kind need to use appropriate production technologies and approaches for a given platform.

“Thinking about the context in which it will be seen is really important,” Ebsen said. “Creating advertising for mobile doesn’t have to be on high-end phones. Some of the most successful campaigns I saw on Snapchat were shot on iPhones, because they needed to blend with the other content.”

“Broadcast formats have a beginning, middle and end,” Ebsen said. “Drop-off is so quick on mobile that I can’t wait to explain to (viewers). The end has to be in the first two seconds. Nobody (making mobile advertising) seems to get that yet.”

Ebsen said she remains close friends with Spiegel and left on good terms. Indeed, Spiegel even released a statement about his high school chum’s new adventure: “Rylee was a valuable and innovative creative partner throughout Snap’s early journey. We’re excited for her to fulfill her dreams as a full-time director!”

Ebsen’s departure was very different from those of some recent departures from Snap, including CFO Tim Stone, who left after eight months. Ebsen, by contrast, hopes to continue collaborating with Snapchat and Big Block clients on projects that leverage Snap’s still substantial connection to, in particular, its many devoted teen users.

“It was tough to leave, but (Spiegel) definitely understood,” Ebsen said. “Snap was a really fun place to be. I got to do way more than most people right out of school. It really broadened my capabilities. (For Big Block), I’m positive a lot of the projects I do will have a Snapchat component to them.”