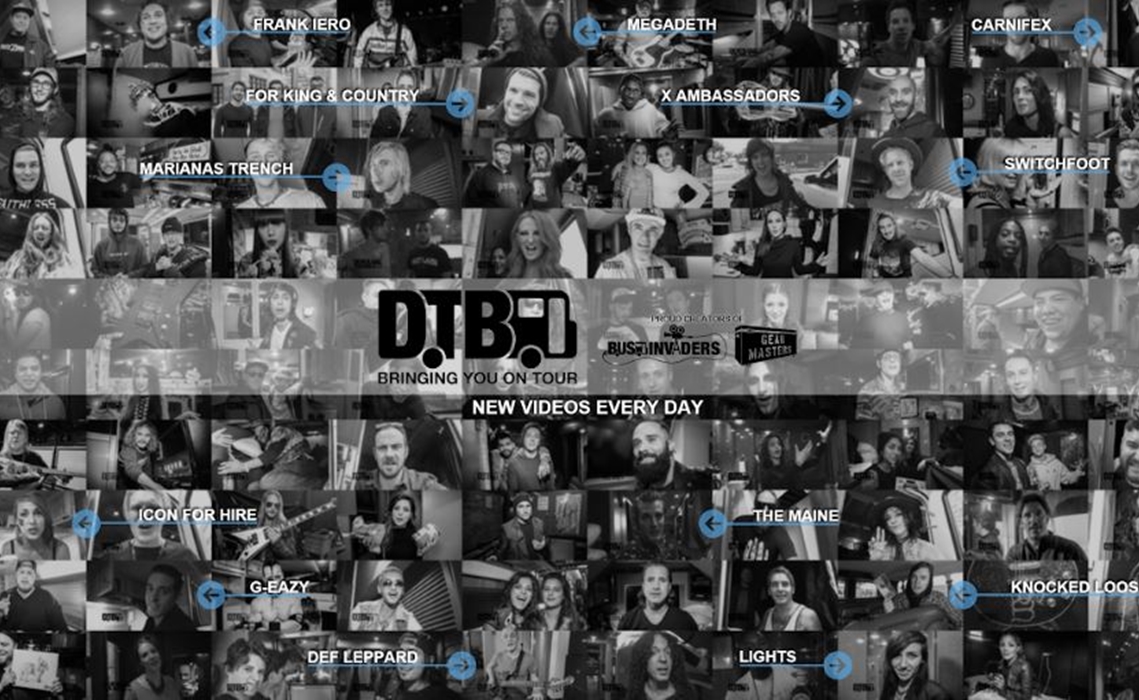 Welcome to TopBuzz Creator Spotlight, where we’ll be profiling a handful of notable creators who are expanding their distribution prospects onto TopBuzz — a two-year-old content aggregation app owned by Chinese mobile giant Bytedance. Even in a crowded platform landscape, TopBuzz offers discovery and revenue prospects that these creators describe as irrefutably additive.

Like a lot of middle school students, Joshua Weidling became entranced by music during adolescence. However, unlike many of his contemporaries, Weidling had the preternatural gumption to pursue his passion as a business, promoting local bands on MySpace and helping garner buzz for a total of roughly 80 live shows throughout his middle and high school careers — each of which, he says, was attended by roughly 200 fans.

In college, Weidling decided to further these endeavors by launching a digital media business that straddles the line between artist promotion and journalism. Thus, the concept of Digital Tour Bus was born — a web series that sees Weidling interviewing artists on their tour buses, asking them about all things life on the road.

In roughly eight years, Weidling has amassed 130,000 YouTube subscribers — a feat he attributes not to any viral clips but to a machine-like consistency. We sat down with Weidling to discuss how he has managed to amass a library of 5,000 interviews over the past eight years, DTB’s various revenue streams, and why the Bytedance-owned news and content aggregation platform TopBuzz has been a natural step in the venture’s growing distribution strategy. Check it out below:

Tubefilter: How did the idea for Digital Tour Bus come to be, and how many people are currently involved with the operation?

JW: My name is Joshua Weidling and I’m the founder and owner of Digital Tour Bus (DTB). I’ve been involved in music since I was a junior in high school. I started off by promoting bands locally, and ended up starting DTB when I was a freshman in college. The concept came together due to my curiosity for how bands live on tour. I had done some research and found no media companies doing these types of videos. After a year of web development, content creation, and promotion, I launched the website in March of 2010.

Currently, the DTB team is relatively small. I schedule all of the interviews and film the videos myself — as well as schedule, post, and promote the videos on YouTube, Facebook, Dailymotion, DigitalTourBus.com, and TopBuzz. I do have a small team of video editors that help with the editing of the videos.

TF: Do you work full-time on DTB?

JW: This is a side hustle. I gave myself three years after college to develop a following and find different ways to monetize the venture. At the end of the day, with DTB producing such niche content, it’d be difficult to turn it into a full-time gig.

It works great as a side hustle, though, and my experience with YouTube and working with influencers helped me land my current job. During the day, I work for the men’s skin care brand Tiege Hanley, handing all of its influencer marketing. Funnily enough, the company was co-founded by a pretty massive YouTuber — Aaron Marino, who goes by Alpha M, and whose advice videos have helped him amass over 4.7 million subscribers.

TF: How do you determine which artists you are going to interview?

JW: This is one of my favorite questions because it’s such a mixed bag. I typically film with between 10 and 20 artists every month. Out of those, a quarter come from publicists pitching me, the other 75% comes from the roughly 50 to 75 artists I am actively seeking out every month. Since my interview requests are only accepted between 10% and 20% of the time, it requires significant work on my end. I figured this would only get easier as DTB has grown, but it really hasn’t. I still find myself fighting tooth and nail every month to get the best interviews that I can.

As far as where the interviews are conducted, the vast majority are filmed at music venues across the Chicago area, which is where I’m based.

TF: How did you manage to amass 130,000 YouTube subscribers?

JW: Consistency, consistency, and more consistency. For the last four years, I have released at least one new video every single day. At the channel’s peak, I was releasing 25 videos every week. Currently, though, I post two new videos daily, which has enabled me to grow DTB’s YouTube channel at a relatively consistent rate of between 1,000 and 3,000 new subscribers every month.

I have my fair share of well-performing videos (it’s bound to happen when you have more than 5,000 videos available online), but none got all of their views overnight. My video catalog fills a unique niche, which helps it get recommended often to fans of a particular artist.

Also, part of the founding mission of DTB was to help artists who are just starting out. So if you look at my videos, you will see a ton of artists you’ve probably never heard of. This isn’t a mistake. I do my best to feature up-and-coming artists, allowing my platform to have more of a purpose. If I’m being honest, this probably has a negative impact on my growth. I’m okay with that, though. I’d rather build a community of people who like discovering new artists.

TF: What has been your favorite interview to date?

JW: After interviewing nearly 2,000 artists, this is a really tough question. The one that always stands out to me is interviewing Kyle Cook from Matchbox Twenty. I grew up listening to the band and Kyle treated me very well during the interview — plus, they were playing to a sold out crowd of 15,000 that night, which was just so cool to see.

TF: Are there other components to the Digital Tour Bus business aside from the YouTube channel?

JW: Over the years, revenue streams have come and gone. I actively reached out to the team behind [now-defunct] Vessel, a startup from the former Hulu CEO, before they launched, and became part of the founding roster. I always try to keep my ear to the ground about new content distribution opportunities, which is how I found out about TopBuzz.

Another piece of the DTB puzzle consists of artists paying me to listen to their music in exchange for feedback and coverage consideration. I’m no music expert, but I know what I like and have a platform to share new music. The biggest platform that facilitates this is called SubmitHub, which enables artists to submit their work directly to bloggers  — and then enables these bloggers to monetize their platforms in a way that lets the music speak for itself.

TF: Why did you decide to create other recurring series beyond the flagship tour bus interviews?

JW: Bus Invaders is the flagship series with more than 1,500 episodes where we take fans inside the buses of today’s touring bands and artists. We’ve filmed with the likes of Matchbox Twenty, Twenty One Pilots, G-Eazy, Megadeth, and Fifth Harmony.

Gear Masters features a musician or band — including Def Leppard, Whitesnake, Newsboys, Judas Priest, and Rob Zombie — showing off all of the musical gear that they use onstage. Cooking At 65mph features an artist or band (Kimbra, B.o.B, Andy Grammer) preparing a meal that they like to make on tour. Other interview-style segments include Crazy Tour Stories, Dream Tour, First Concert Ever, Pre-show Rituals, Tour Pranks, and Tour Tips (Top 5).

TF: What has your experience been like on TopBuzz thus far?

JW: I’m always looking for more content distribution opportunities, especially on platforms that allow me to engage with viewers and don’t directly compete with YouTube. TopBuzz fills that void perfectly. Not only is there not a ton of crossover from my experience, but there is a relatively active comments section, which allows me to engage with the audience quite a bit. I put a lot of emphasis on engagement: I reply to nearly every YouTube comment I get, as well as every tweet, direct message, or comment on any platform that DTB is active on.

Currently, DTB’s videos are distributed on YouTube, Dailymotion, Facebook, and TopBuzz. In the past, our content was on Vessel and Vid.me — both of which no longer exist.

JW: To keep DTB on the same trajectory that it has been for the past five years — or better. Some creators strive for a viral video, but I strive to give DTB viewers consistently awesome content on a schedule that they can count on.

It’s early in the year, but I’m already making strides to streamline my workflow, which will free up more time for the venture while trying to keep a passable work/life balance. I plan to do more testing — especially with strategic advertising — to help reinvest more earnings back into the channel via YouTube search ad campaigns.

As it has been for the past two years, the biggest part of my plan for 2019 is no different: to release two new videos every single day.

This Creator Spotlight is brought to you by TopBuzz. TopBuzz is a distribution platform that uses powerful AI and algorithms to help creators and publishers discover new audiences for their content. If you’re interested in monetizing your content join TopBuzz for free. Take the AI-powered app for a spin and see how your customized feed improves with every touch. Download TopBuzz for iOS or Android.