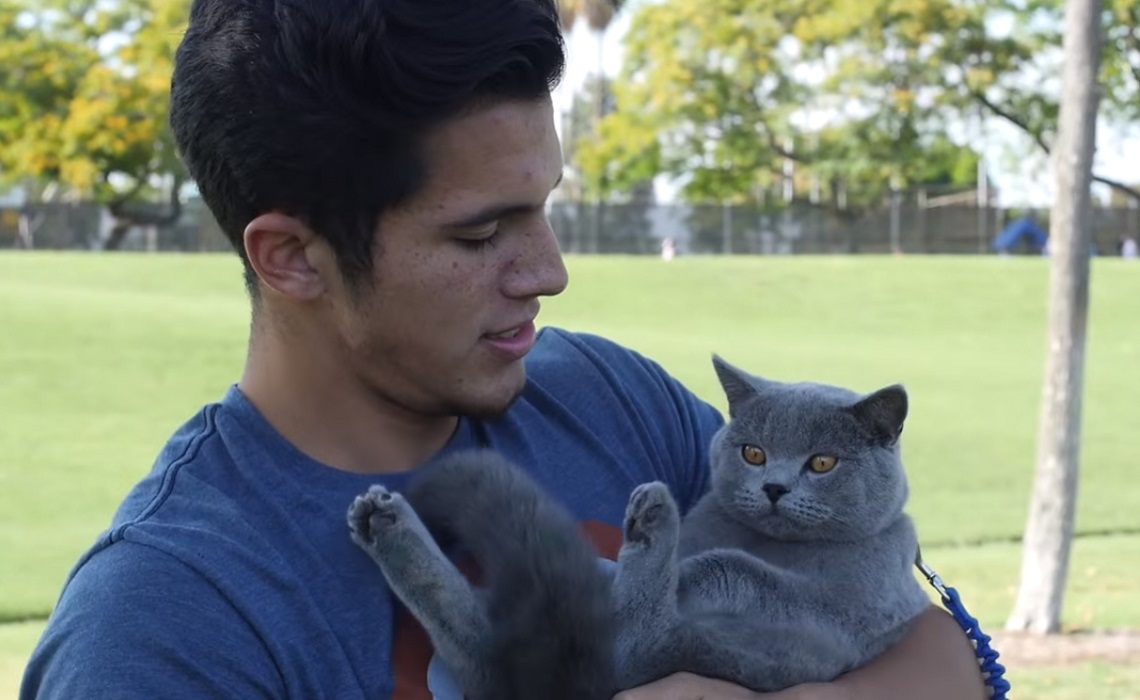 In 2010, Aaron Benitez became homeless. He’d just finished his sophomore year of college, and his parents couldn’t afford to pay his tuition. Wary of being saddled with student loans, Benitez bought an aged Chevrolet Suburban on Craiglist and moved into it to save money. He slept parked on the streets by his college, and spent his days sharpening the special effects skills that now have netted his YouTube channel, Aaron’s Animals, a golden one million subscribers.

Like his old college roommate and frequent collaborator Zach King (who has 3.1 million subscribers of his own), Benitez is a bona fide special effects wizard. Both of them use a proprietary editing method that makes the augmented adventures of Benitez’s eye-catching cat Prince Michael journeying toward soccer stardom, babysitting his neighbor’s kittens, and taking center stage in an all-cats version of Love Actually look incredibly realistic.

These days, Benitez (who’s repped by Collab Creators) lives in a house with Prince Michael and seven roommates. Plotting, filming, and editing his star cat’s antics — which often guest star other animals — takes up much of his time, but he found a slice to sit down with Tubefilter and chat about his YouTube journey, the labor intensity of his special effects process, and what project he hopes to tackle in the future.

Aaron Benitez: YouTube is our favorite platform and we are stoked to have finally hit a million subs! We’ve been making videos on here for nearly a decade now, so it feels great to see everything take off over the last year.

Tubefilter: You have kind of a crazy backstory, as anyone who watched The Homeless YouTuber will know. What made you decide to pursue videography and special effects training–and eventually YouTube–after you were forced to stop taking college classes?

AB: I’ve been into film since high school, but it wasn’t until I met my dormmate Zach King in college that I was really encouraged to start a YouTube channel. If it wasn’t for his influence, I’d probably be making music videos or filming weddings.

Tubefilter: Did you join YouTube with the intent of making it your career, or did that happen organically? Why did you decide to focus your channel on animals?

AB: When I started the YouTube channel, it was with the intent of helping others learn filmmaking and visual effects on the side. It wasn’t until my senior year of college that we adopted a pair of kittens. After a few months, we thought it would be fun to include them in one of our first viral hits, Jedi Kittens [which now has 15 million views and two sequels, each with 25+ million views]. It was that experiment that brought me to realize that there was a unique opportunity to combine our background in visual effects with real-life animals to make content the internet hadn’t seen before.

AB: When we first started, I think it was Prince Michael’s eyes that captured our audience. We use a proprietary effects script that allows us to use live-action footage and manipulate it in a way that hadn’t been done before. A large portion of our audience found themselves questioning whether or not the clips were real or fake, as the effect sort of walks the line of what’s believable.

After making these videos for a few years, we didn’t really see our channel start to take off on YouTube until about a year ago. For the last year, we’ve been focusing on making our videos longer, while focusing on Michael’s character and personality. We also brought an illustrator on to our team that makes these awesome drawings at the end of every video.

Tubefilter: How did you meet Prince Michael, and how did the idea to make him the star of your channel come about?

AB: I adopted Mike as a kitten when I was living in New York. It was [with] my best friend and brother, living in a tiny studio downtown. Mike was just one of the guys living his best life as a city bachelor. We’d take him on the subway and walk Central Park. He quickly became comfortable around people and stimulation. After a few months, we tried making a few videos with him, and he was a natural.

Tubefilter: Your videos have some serious production quality. How long does it take you, on average, to film a video for your channel? Do you have particular hours/days you film? Do you take time off?

AB: Our longest video was just under five minutes and took about three months to make. Typically, every minute requires a full 12-hour day of filming and at least a week of visual effects/editing. There typically isn’t a single frame in one of our videos that hasn’t been altered in some way.

AB: It’s a full-time job, although I also run a wedding videography business. We recently shot the wedding of YouTuber superstars Cole & Sav!

Aside from work, I love to spend time in the ocean. At least once a week, I try and get in the water.

AB: For me, the most enjoyable step is the writing process. At least, for the time being, it’s the most collaborative of the steps involved.

AB: We hope to make our videos longer and longer while developing Michael’s character. The dream would be to eventually make a great movie.

You can add yourself to the ranks of Benitez’s more-than-a-million YouTube subscribers at his channel YouTube.com/AaronsAnimals.