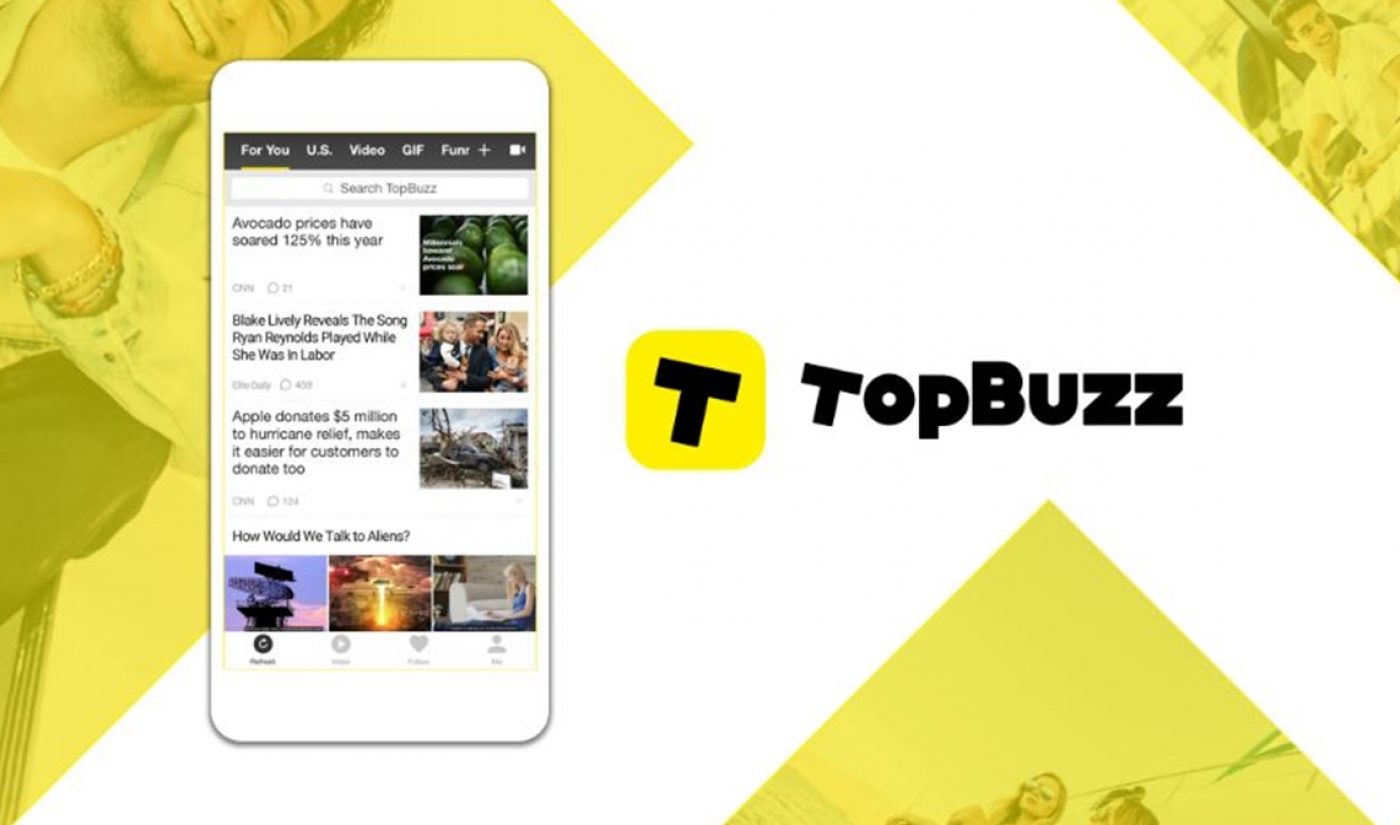 A two-year-old content aggregation and discovery app called TopBuzz is gaining the attention of publishers and digital networks alike — and could serve as an avenue for both nascent and established creators ever in search of new distribution and monetization prospects.

Born out of Toutiao (the popular news aggregation mobile application from parent company Bytedance), the L.A.-based machine learning and A.I.-powered feed serves up everything from snacky food videos (such as Tasty’s 4 Hearty Fall Pastas) to Matthew Santoro‘s infotainment videos to silly viral clips (like Dog Mistakes New Toy For Intruder). TopBuzz has rapidly grown from 1.8 million monthly active users in November 2017 to roughly 23 million active monthly users today globally (with the exception of China, where TopBuzz isn’t available in lieu of the aforementioned Toutiao). The algorithm that drives the platform provides customized feeds for each user based on their stated preferences, consumption history, and “sophisticated look alike modeling”.

While anyone can share articles, video, photo galleries, and GIFs directly to TopBuzz, the company is officially partnered with 200,000 publishers and independent creators to syndicate, license, and distribute their works. This includes illustrious news purveyors like CNN and The New York Times, digital-first outlets like Buzzfeed and Vox, digital video networks including Studio71 and Jukin Media, and indie creators like YouTube prankster Jack Vale.

YouTube creators can sync their channels to TopBuzz, too, so that they can upload old and new videos seamlessly, whereupon content is ingested into TopBuzz and displayed in its native player. Bloggers can deliver their content via RSS, or publish directly via TopBuzz’s own content management system.

“We don’t see ourselves as competitive with other creator platforms, but rather additive,” Mitch Rotter, TopBuzz’s head of English content operations, tells Tubefilter. “For a creator thinking about joining TopBuzz, the opportunity is to reach new and relevant audience through our global content ecosystem.” TopBuzz also operates local iterations in Canada, Australia, Korea, Japan, Brazil, and the U.K. — and content posted to the U.S. app is distributed globally.

In addition to serving as a unique discovery tool for creators, TopBuzz also provides ever-crucial monetization opportunities for select partners. Creators must apply for monetization, with eligibility based on content output, proof of ownership, and adherence to the site’s community guidelines. TopBuzz pays creators on a per-click basis, it says, with monetization kicking in on the very first upload. Plus, content does not have to be exclusive to TopBuzz in order to qualify.

While earnings depend on a variety of factors, TopBuzz says revenue across the board (if you include everyone from publishers to independent creators) averages out to a $3 take home eCPM. (eCPM or ‘effective cost per mille’ refers to the total revenue generated by an ad campaign divided by the number of ad impressions multiplied by 1,000).

Given that your average YouTube creators can take home an average of $1 to $2 eCPMs, TopBuzz’s earning potential could be appealing. As a result, many digital creators are looking to expand distribution prospects onto TopBuzz. For instance, hundreds of Studio71-managed channels are partnered with the platform, says Nick Jacklin, the network’s VP of global distribution. This includes “comedy, entertainment, and VFX, along with international creators in Germany, France, and Italy.” Jacklin adds that, thanks to the two-year partnership, TopBuzz has expanded the company’s footprint “significantly,” and also “generated meaningful revenue for our creators.”

While Studio71 has been working with TopBuzz roughly since its launch, more recent partners — including user-generated content dynasty Jukin Media, which signed onto the app in April — are similarly enthused about the app’s discovery and monetization prospects. Jukin posts content to TopBuzz from its FailArmy, Pet Collective, and People Are Awesome brands, says Cameron Saless, the company’s chief growth officer — including standalone clips, compilations, listicles, and hosted shows.

And Jukin’s brand of short, grabby videos are particularly well-suited to TopBuzz users, says Rotter, given that people are primarily coming to the site to learn something new or witness something showstopping. Content verticals like gaming, tech, DIY, food, and sports tend to perform better than personality-driven vlogger-to-camera formats that flourish on YouTube, he adds, given that TopBuzz prizes a discovery model, not a subscription one.

Doubling Down On Creators

In addition to the aforementioned benefits, TopBuzz is looking to take a more hands-on approach in shepherding the careers of up-and-coming creators, Rotter says. The company recently launched an accelerator program called Ignite whose aim is to help small and mid-sized creators amplify their careers. Rotter describes a potential Ignite applicant as, say, a creator with roughly 100,000 YouTube subscribers who might be struggling to achieve brand deals and getting lost amid YouTube’s algorithm.

Applicants are selected for Ignite based on the quality and diversity of their content, existing followers, and historical engagement on other platforms. Those who are accepted into the program receive guaranteed monthly revenues, and are eligible for performance-based bonuses. They also receive verified standing on TopBuzz, copyright protections via TopBuzz’s proprietary Fingerprint System, and preferred promotional placements.

Additionally, as part of Ignite, TopBuzz is readying the launch of TopBuzz Academy, which will feature digital tools and IRL seminars and meetups to help writers, bloggers, and vloggers hone their craft and provide a sense of community.

“Simply put, the benefit to uploading on TopBuzz is the exposure to a new audience and the extra income,” said YouTube veteran Jack Vale, who has been partnered with the site for a year, and who uploads content natively on a daily basis. “I made more money on TopBuzz last month than I did on YouTube, which has given me more funds for creativity.” Vale added that in addition to creating new content for TopBuzz, he is also able to edit and re-share his archive of past YouTube videos to the platform.

“So far, joining up with TopBuzz has been the best thing I’ve done for my online comedy career this past year,” he said, “and I expect the next year to be even better.”