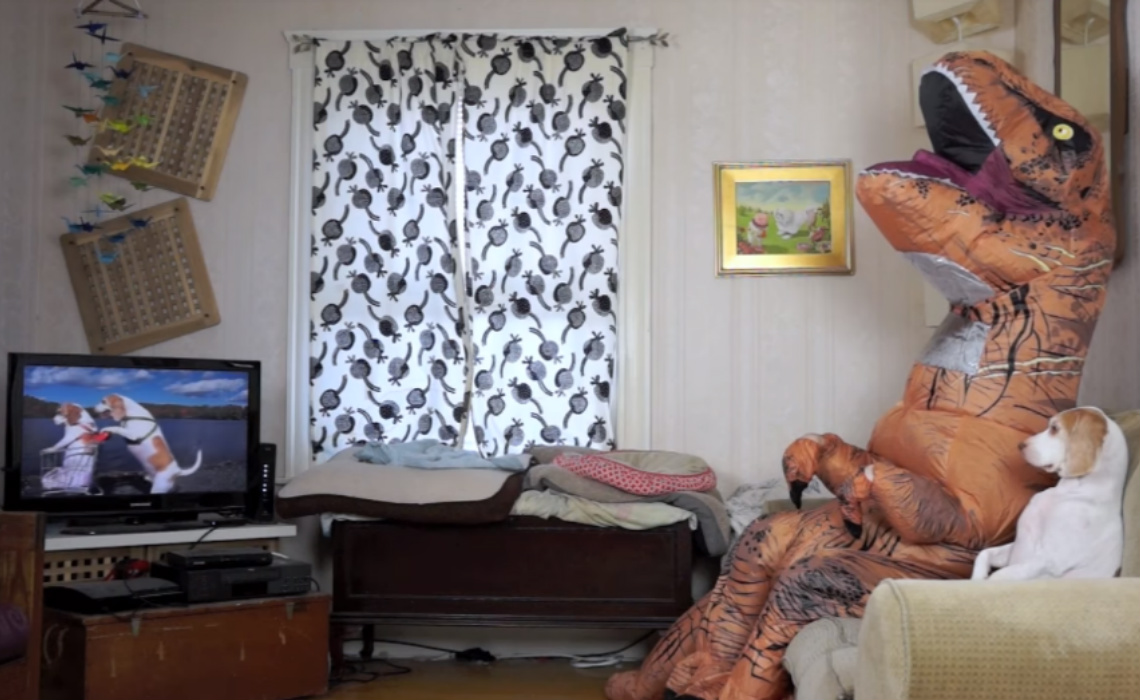 Creators Going Pro: How Maymo The Beagle Went From A Fleeting Viral Sensation To The Center Of A Full-Fledged YouTube Business

Welcome to Creators Going Pro, where in partnership with Semaphore — a creator focused family of companies providing business and financial services to social media professionals — we profile professional YouTube stars who have hit it big by doing what they love. Each week, we’ll chat with a creator about the business side of their channel, including identifying their Semaphore Moment — the moment they truly went pro.

If there’s one thing the internet loves, it’s adorable animals, and Maymo the Lemon Beagle is no exception. His channel, which has nearly 2.5 million subscribers and more than one billion views, features Maymo alongside his canine siblings Potpie and Penny in wacky, often prop-filled adventures as they encounter everything from giant strawberries to Christmas zombies. The channel hit a whopping 110 million views last December, and since then has netted more than 50 million views per month, with the last few months consistently topping 70 million, per internal Tubefilter data.

Maymo’s owner (and channel operator), Jeremy Lakaszcyck, first found an audience for Maymo back in 2012, after Ellen DeGeneres aired his video Dog Loves Toy Mouse on her show. The channel also picked up traction when major news outlets covered Maymo content hitting on the ‘dog shaming’ trend, where owners wrote humorous notes from pets behaving badly. Maymo had to bear being shamed for chewing the head off a stuffed elephant — and then wearing its decapitated remains (far cuter than it sounds) — and the internet loved it, sending his view counts and subscriber numbers spiking.

But even with hype from Ellen and subsequent fervor, turning occasionally viral videos of a cute pup into a long-term, self-sustaining business that makes a profit wasn’t easy. Lakaszcyck has spent six years doing exactly that, and he and his video-making partner recently hit a big milestone: making Maymo and his channel their full-time job.

Here’s how they got where they are.

Tubefilter: When you joined YouTube in 2006, were you even thinking about potential monetization or career opportunities down the road? Why did you join?

Jeremy Lakaszcyck: I actually joined YouTube just to upload a video of a man dancing on the subway — and that was really just for my friends and me to watch. At the time, I was busy finishing up an undergraduate degree in English, working two jobs, and planning for grad school…so yeah, monetization on YouTube wasn’t something I was striving for, or was even aware existed.

TF: Maymo, the star of your channel, came along in 2011. How established was your channel at that point? Why did you decide to have Maymo star?

JL: At that point, my channel wasn’t established at all. I had put up a bunch of weird edits of funny things I’d filmed at bars and in my travels. I started posting videos of Maymo because there was just something really special about him, and I wanted to share it with others. When blogs and websites started picking up his videos, I made the channel exclusively Maymo.

JL: I feel like I got my first AdSense check in 2011, and it was just over $50. The following year, I joined a network, but it took many years from that point to build the channel I have today.

The network I joined at the time was called Viral Spiral Group (since acquired by Brave Bison). They were the outfit who represented The ‘Charlie Bit My Finger’ family, who had one of the first ‘viral’ videos on YouTube. The network really helped to get my videos out there, but more importantly, taught me how to value my work — that while having my videos on television and other popular platforms can be great, it’s important not to be taken advantage of. Currently, the network helps negotiate various licensing deals, as well as brand deals.

TF: When was that Semaphore Moment for you—the first time you realized you were a professional YouTube creator?

JL: In 2012, Ellen showed one of my videos on her show, which certainly created some buzz. In the years since, my videos appeared on a bunch of other popular network television shows like Good Morning America and The Tonight Show as well as news outlets like TIME and Huffington Post. While it was amazing to see my work on these platforms, my views on YouTube would only get a momentary spike, and then flatline. It wasn’t until I started posting videos more consistently (Note: Lakaszcyck now uploads one a week, on Fridays) in 2016, and then earning a more regular viewership in 2017, that I began to see this more as a profession.

JL: I like comedic content because it makes people happy. When I get an email from a woman who tells me watching Maymo videos got her through years of debilitating chemotherapy, or a mother who writes to tell me watching Maymo with her young autistic son has helped them to bond closer, or even just someone telling me my videos helped them get through their day, it honestly makes it all worth it.

I do follow trends to be aware of what’s going on and also for inspiration, and while I think it’s great to be influenced by others, it’s also important not to forget what brought viewers to your content in the first place.

TF: Where do you source your (frankly, incredible) range of props and costumes? How does that factor into your budget for the channel?

JL: I find my stuff by raking all the usual sites — eBay, Etsy, etc — and also going to shows where FX artists are selling their wares. I have a budget for each video, and while I’m shopping, I’m constantly reminding myself of the bigger picture so I don’t overspend.

TF: How big is your YouTube production team? When did you start bringing people on board?

JL: My YouTube ‘team’ is really just my partner and me. We’re pretty happy right now to both be busy with the videos, but doing this full-time is still a fairly new thing, so who knows what the future will bring.

TF: What’s next for your channel? What are you building toward?

JL: As non-fun as it sounds, I honestly am looking forward to paying off my college loans. After that, I’d like to buy a dog ranch so we can take care of more of these beautiful, hilarious little beasts. A few years ago, I shopped a Maymo book around without much success. I feel like we’re better positioned now to sell a book, so who knows, I may give that another go.

Creators Going Pro: Married YouTubers ‘Rose & Rosie’ Have Made A Career Of Candid, Clever Content About Their Life Together