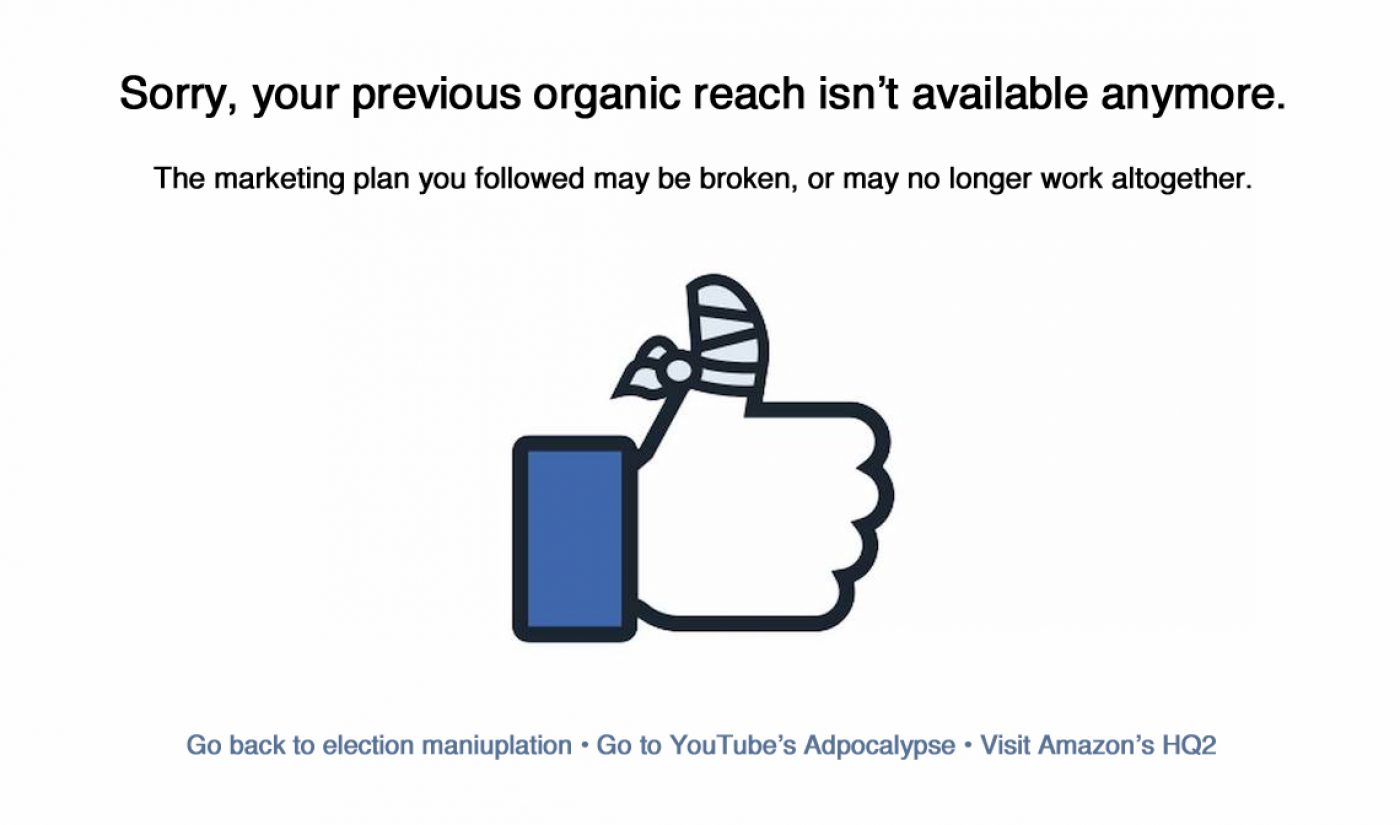 After too much time for bad behavior, the Internet’s biggest powerhouses apparently collectively decided it was time to make nice with their American customers/hosts/neighbors. Perhaps Facebook, Amazon, Apple, and Google (four-fifths of the so-called FANGs along with not-in-hot-water Netflix) can buy back our love. They sure need to do something.

Just to review the FANG-tastic news of the past few days:

Facebook announced the biggest News Feed changes perhaps since adding it to the interface in 2006. After all the Fake News and Russian election manipulation, among other News Feed issues, Mark Zuckerberg had to do something. His solution: kick third-party publishers and content to the curb, consigning those who aren’t paying for placement largely to an easily overlooked new section.

I doubt this fixes Facebook’s real problems, which are built on the core of its business model. Basically, the longer we stick around on Facebook, the more money Facebook makes. Providing less sticky content means less sticky users, and less money. As Zuckerberg kills off organic reach for third-party posts, a lot of suffering is coming for legitimate news organizations rash enough to build their business on a Facebook foundation. Maybe that tamps down some News Feed manipulation similar to what we saw during the 2016 election.  Except, who’s paying someone else to carry their stories? Brands, marketers and, ahem, Russian fake-news creators trying to manipulate elections. Keep trying, Zuck.

Google’s YouTube – after Ad-Pocalypse, Abused Child of Ad-Pocalypse, and Logan Paul’s Career Suicide – changed eligibility rules for its partner program (i.e., who gets to make ad revenue from their videos) to weed out at least some smaller bad actors. It may also help the remaining qualified channels make more money, which would be good. YouTube also said it will use actual human beings to review and verify all videos eligible for its even bigger Google Preferred ad program. Just expect verification delays and disagreements aplenty for big YouTube stars, who can thank/beat senseless previously mentioned Logan Paul. At least we should see somewhat fewer videos by extremists or creepy parents being financed by Charmin and Kool-Aid. I guess that’s a win.

Amazon narrowed the list of cities to 20 in the running for its proposed second campus. Amazon said it plans to spend $5 billion and employ 10,000 people at what’s  been dubbed HQ2. Some governor and mayor are soon going to be very happy. The list of cities includes some surprises, including both New York and Los Angeles, though Amazon has already committed to building out video-production facilities in Westside L.A. suburb Culver City that may employ 2,000.

Apple, citing the new tax laws, said it will pay the U.S. treasury $38 billion to repatriate at least some of its whopping $252 billion overseas cash hoard. Some of the newly free money will finance a second major headquarters for its customer-service and other operations. The numbers are a little fuzzy, but Apple said it will inject $350 billion into the economy over five years and generate 20,000 jobs as part of its Bringing the Big Bucks Home campaign (my name, not theirs). The Apple second headquarters isn’t quite their version of Amazon’s HQ2, but it, combined with huge new data centers around the country and a U.S. workforce that totals 84,000 suggest that the company has a lot of friends sprinkled around already. The company needs it, though.

Apple has gotten lots of grief lately, notably for the battery life problems of aging iPhones running its new operating system (a $29 replacement program blunted that). It also had two of its biggest investors push the company to deal with internet addiction (getting right on that); European regulators demand higher tax payments in the U.K. and Ireland (paying up at least in part); and concerns for the gaping security maw caused by Meltdown and Sceptre, two defects in the Intel-made chips in all of its devices (and many other companies’) The Meltdown and Sceptre fixes may slow operations 30% or more, for Apple and others, but they sure beat having all your data thoroughly and unstoppably ransacked by hackers.

That’s a load of making up, to users, customers, partners and advertisers. I’m not holding my breath on Facebook and Google making nice with publishers (how crazy would that be?) who have provided them so many billions of dollars in ad revenues over the past decade with too little recompense.

But at least Silicon Valley’s superpowers figured out they’ve overstepped their bounds in too many areas, and maybe they should start buying some flowers for all the abused family members. About time.