From Bedroom Closet to Recording Booth: The Meteoric Rise Of Rooster Teeth Animation 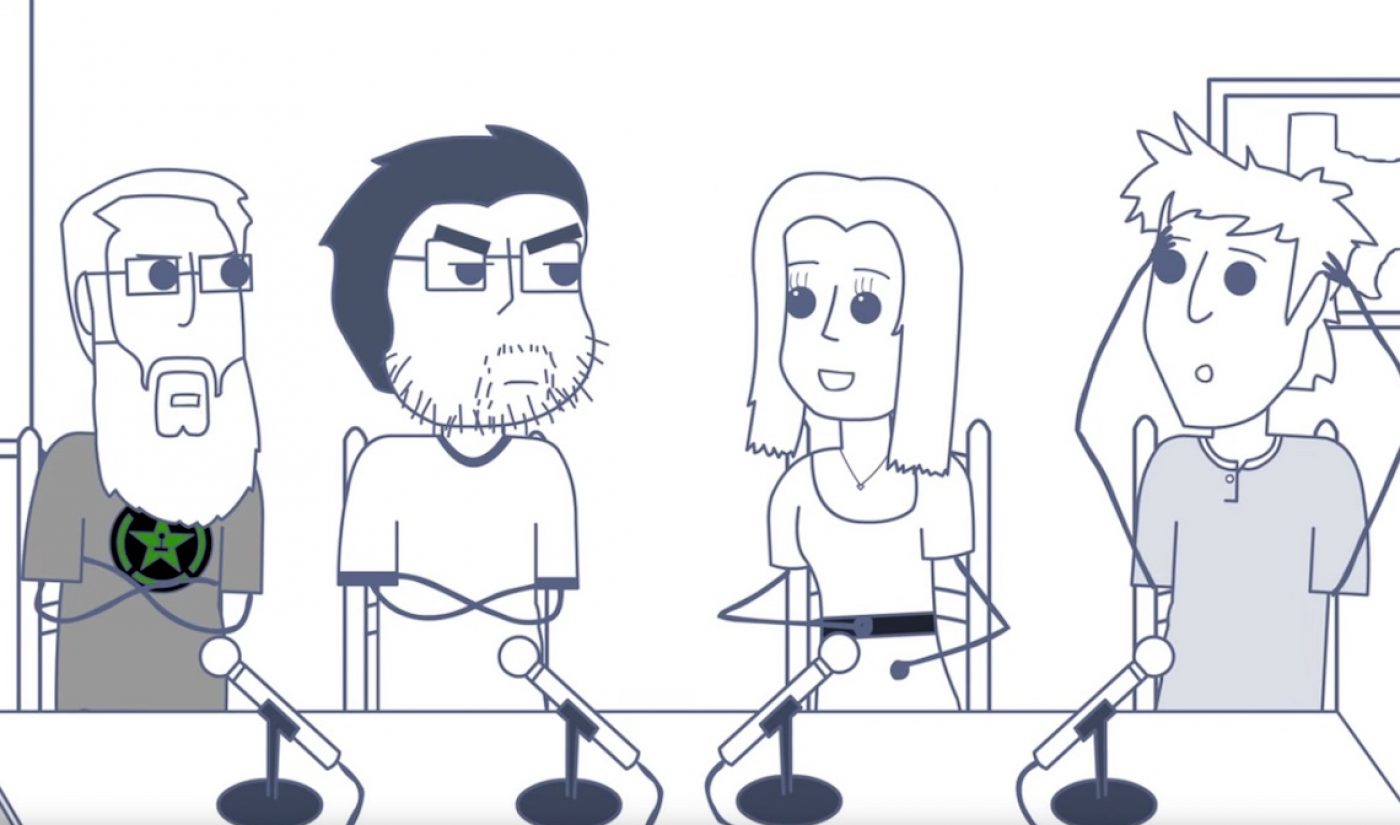 At first glance, the nondescript stucco structure in front of me could have been any other office building in Austin, Texas. But if the millions of Rooster Teeth fans around the world knew where this unmarked and (mostly) undisclosed establishment was, it would be their ultimate mecca. Why? Because hidden behind its doors are the staff, projects, and secrets of the digital production company’s entire animation department.

As I approach the building and see Rooster Teeth’s public relations manager Sophie Turcotte waiting for me at the door, dressed in a smart day-to-night dress (she has to go to the Day 5 season two red carpet premiere that night), I’m highly aware fans of the company’s web series like RWBY, Red vs. Blue, and Animated Adventures would kill to be in my black wedges right now. So really, it makes sense the company hasn’t yet revealed where exactly their animation team works.

We enter the building, and my eyes take in the huge open space full of sectioned-off departments and computer workstations, each humming quietly and decorated with various pop culture tchotchkes or memorabilia. As for the animation staff, well, they’re clicking away at their various projects with eyes transfixed on their screens. The hard work is almost palpable; it’s the crunch before the storm known as RTX, the company’s annual internet and gaming-focused convention set to start the following day and ultimately attract a whopping 62,000 attendees to downtown Austin. After I acquire some much-needed coffee from the kitchen, I’m ushered into what looks like a typical meeting room furnished with a round table and chairs. But unlike most average American offices, the walls are covered with white boards full of storyboard ideas, sketches, and employees’ quips. As I take a seat, I notice scribbles on a piece of lined notebook paper on the table; it’s a drawing of a devilishly-grinning, spectacled man chest-high in what I assume are clouds. Apparently, some Rooster Teeth animation employees disagreed with my interpretation; the captions surrounding the picture mention “balls” and “how he likes it,” a clear indicator of the company’s unapologetically informal environment. Turcotte retrieves Gray Haddock, Head of Animation at Rooster Teeth, whose stocky build makes me think he’d look very out of place in a business suit. After introductions, Haddock begins the tour of his team’s studio, casually sticking his hands in his jean pockets as he discusses the scope of the animation department and why it had to move to a new location separate from Rooster Teeth headquarters and main stages. He tells me that out of the company’s 300 employees, his animation team comprises roughly 100 of them. In short, they simply wouldn’t all fit at the main office without it bursting at the seams. While he explains this very matter-of-factly, his Han Solo-esque smirk reveals his pride in the growth of his team.

Haddock leads me to a large grouping of unoccupied computers near the back of the office’s open floor plan. This is where the 3D artists normally work, he says. Noting the number of machines, I ask him how many employees make up the 3D department. “Oh, about 80-85 employees,” he replies, at first not reacting to my exclamation of surprise but then nodding in understanding. “Yeah, it is a lot… The animation department makes up one-third of the entire company, and 80-80% of our team is just 3D.”

The number of employees in Rooster Teeth Animation shouldn’t surprise me or anyone else, though. Animation as an art and entertainment form is a huge undertaking, especially when live action web series and television shows take so much shorter a time to produce.

As we stop by a gathering of supervisors who joke with each other as they review edited scenes ready for approval, I pose a question to Haddock: what’s the value in producing animated series if it takes this much more time, effort, workforce, and money?

“Animation lets you tell stories that you’re not going to be able to easily build that image [for] in live action,” Haddock explains. “I think there’s a tremendous amount of creativity that goes into live action, but you can let the imagination go crazier sooner when you’re doing things in animation. You can get away with more more easily in animation; the trade-off is that animation just requires even more planning up front.”

Ultimately, though, this is why Haddock believes animation resonates so deeply with its viewers. “I think there’s a greater potential for audiences to connect with an animated story because it’s presentation is a little more abstract, so you don’t get hung up on real-world details that are in every moment of live action in terms of exactly how this actor looks, the certain conditions of the environment, or whatnot,” he says. “Instead, because character designs can be a little more simplified, and because you can remove a lot of visual elements that maybe you don’t want in your shot, then the audience isn’t distracted as much and they can concentrate more on just that emotion or moment or the story.”

As if to prove his point, Haddock points me to the next stop on the tour, a wall boasting a plaque and various memorabilia dedicated to the late Monty Oum, the creator and brainchild behind Rooster Teeth’s wildly popular series RWBY. Without Oum’s vision for the show, it’s highly unlikely the company’s entire animation department would be where it is today — to be sure, it certainly wouldn’t have grown as quickly, nor its shows become so globally popular. Haddock gets quiet as he recalls moments of working with Oum, describing the man’s kindness and drive, as well as his dedication to RWBY. In fact, Haddock says, Oum often worked late into the night on RWBY fight scenes by performing his own martial arts in the nearby 24-camera motion capture stage. “It was amazing to watch,” Haddock says, before moving on with the tour. A few doors away, I meet some music and sound editors before Haddock shows me the fully-equipped sound booth. He says this sound booth is a testament to how far the company’s come from the early days of Red vs. Blue, where recording lines took place in Chief Creative Officer Burnie Burns’ closet.

That’s right; before RWBY, before RTX, even before Red vs. Blue was internet famous, the show’s co-stars recorded their lines by grabbing a microphone, shoving Burns’ clothes to either side for a makeshift sound-dampening effect, and praying no one made too loud of a noise in the room right outside the door.

Next, we cut through the kitchen to enter the second half of the department, separated from the main space by the conference room and offices. Off to the right, a door which looks like it should lead to storage actually reveals a few Red vs. Blue team members as well as the Xbox consoles — all 16 of them connected to four high-def TVs — used to capture the show’s footage from Halo games.

Behind this space sits members of the YouTube channel ScrewAttack, a subsidiary of Rooster Teeth since 2015; they’re working on gaming-related entertainment, quite possibly their popular Death Battle web series. And right behind them, the crew of Rooster Teeth Games huddles around a few computers, talking quietly amongst themselves, oblivious to the fact that Haddock has just completed my tour of his entire 100-person department. How the mo-cap gets made.

As we head back to the conference room, I no longer question why Rooster Teeth Animation hosted its first festival at RTX 2016. The event seemed secondary then, but it’s clear that with this many employees and fans who all boast so much passion for animation, it only makes sense for the department to debut and screen shows both last year and at RTX 2017. But as Haddock tells me after we sit down at the conference table, this year’s festival could be called the “first-ever” second annual event of its kind, because of just how big it became.

In the following days, the animation festival would host expert panels and debut brand new shows from some of the top entertainment companies in the industry. Adult Swim would release the first two episodes of its new series Apollo Gauntlet, as well as sneak peeks of other projects in the works, while animation company Mondo Media would screen two new series, Lastman and season four of Deep Space 69. Explosm Entertainment’s Cyanide & Happiness and YouTube channel How It Should Have Ended would also make appearances; plus, Netflix and Frederator Studios would show up to debut their newest animated series Castlevania exclusively at the festival.

“It was a magic, perfect storm,” Haddock says of the lineup at this year’s animation festival. Because of previous collaborations with Frederator, such as having the company’s founder and CEO Fred Seibert provide the keynote at its first event, Rooster Teeth was able to convince the studio and Netflix that the 2017 animation festival would be the perfect place to debut an animated series so steeped in video game lore. With such impressive brands on board, RT Animation was able to attract the other studios and creators, who would generate so much buzz and foot traffic in the next few days at RTX that the Animation Festival would be a must-see attraction in and of itself.

“It just snowballed,” Haddock says. “I cannot believe it has grown as much as it has just going into our second year, so much so that we’re already talking about what we’re going to do next year.” He vaguely reveals how his team and the company as a whole have some “pretty special ideas” which will put the Rooster Teeth Animation Festival on the map and possibly turn it into a standalone event. Haddock even thinks a version of the festival would work well on the road, travelling to cities around the world uniting animation fans everywhere.

“We’re also going to pay very close attention to what the fans like and don’t like about this second festival, and do a post-mortem on this and use it to enhance how we do next year,” Haddock says, noting that fans can feel free to reach out via social media to leave feedback. “No matter where it goes, I want to make sure we maintain a balance of celebrating all that’s cool in the world of independent animation as well as invite some of the bigger players to come connect with our audience also.”

Haddock’s confidence in the future of the Animation Festival is intriguing, but I’m curious — where will the Rooster Teeth animation department go from here? How will it grow from 100 employees to the next milestone? For starters, the branch would use the coming days of RTX 2017 to announce its new show gen:LOCK, as well as season five of RWBY. And Haddock assures me there’s plenty more to come down the line.

“Rooster Teeth Animation is going to be expanding our programming slate in the next year and a half or so,” Haddock says. He explains how the team working ahead on show schedules and how the department’s work-life balance has allowed people to be more creative with their work and contribute their voices to the stories being told. “It’s because the team here is working so hard that we’ve been able to prove ourselves and show that we can take on even more shows and newer types of animation.”

Haddock also attributes this growth and future plans to the fervent dedication of Rooster Teeth’s fans. “It’s because the audience has been following us no matter where we go and been so generous with their time to check out anything new that we try to introduce to them that lets us keep doing what we do,” Haddock says.

“We just have to keep raising the bar year after year, otherwise we’re just not us. That’s a little bit masochistic, but I think if we just did the same thing year after year, we’d get bored.”