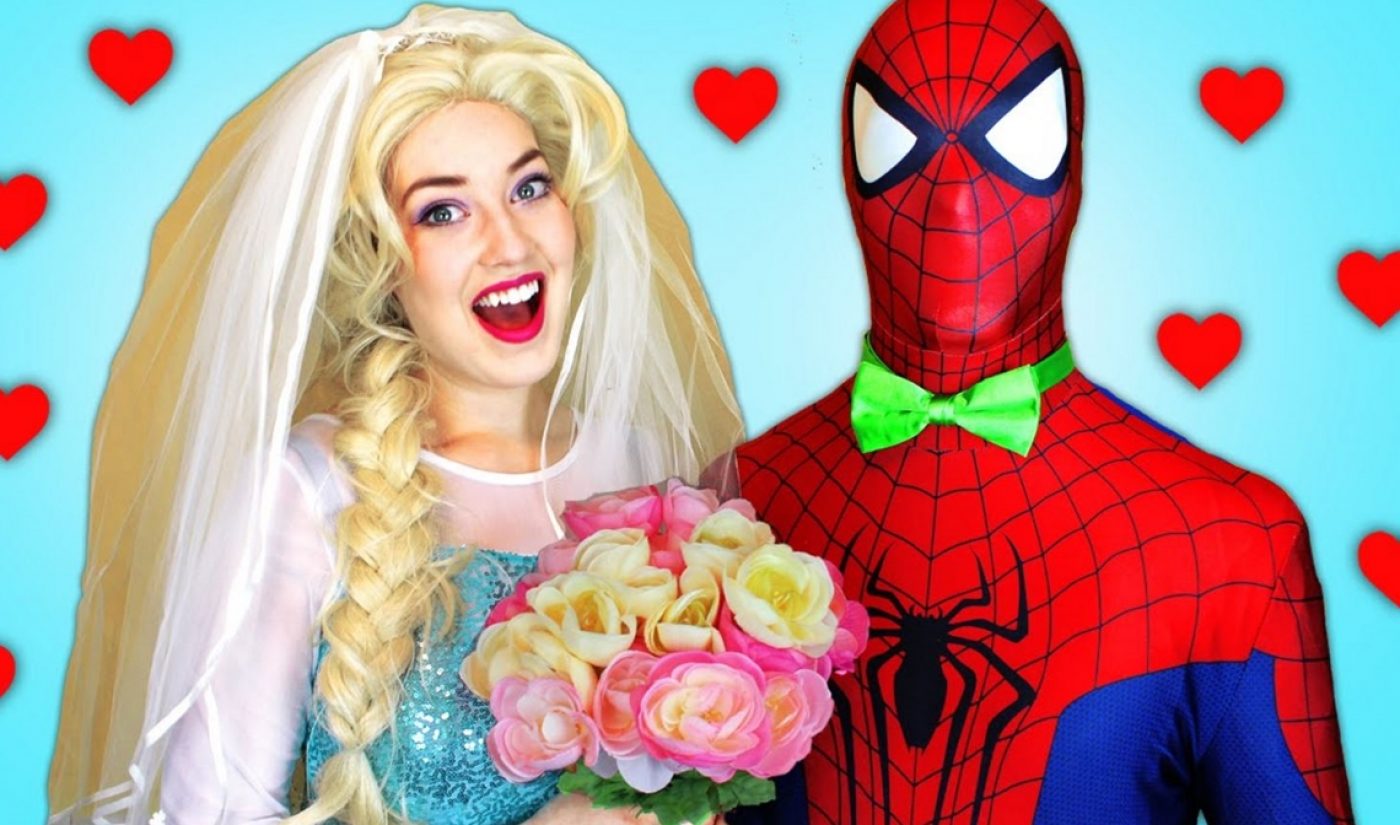 You almost have to see it to believe it.

In a house nestled somewhere in snowy suburbia, adults dressed as cartoon characters and superheroes — Spiderman, Elsa, and the Joker — are enacting a mind-bogglingly surreal video skit. In one scene, a smitten Spiderman gifts Elsa with a beautiful pearl necklace. Then, in what plays out as a silent movie of sorts — complete with royalty-free music and shoddy special effects — Catwoman attempts to kill Elsa with a poisonous gumball, ultimately setting into motion an earnest bubble-blowing battle to the death (below).

This isn’t some weird hallucination. It’s YouTube‘s hottest new trend for kids — perhaps serving as a successor of sorts to toy unboxing videos, which are also massively popular among younger audiences. On a platform where who’d-have-thunk-it content formats, including shopping hauls and gaming walkthroughs, have spawned full-fledged industries and careers, videos of adults costumed as superheroes are drumming up staggering views.

At the top of our Tubefilter charts, which track the most-viewed YouTube channels in the world, Webs & Tiaras — arguably the most popular such superhero channel — has placed within the top five most-viewed channels since last April, garnering more than 100 million views every week. To date, the roughly one-year-old venture — which is part of a family of channels that also includes Toy Monster, Superfriends, and I Love Superheroes — has already amassed more than five million subscribers and 4 billion lifetime views.

Little is known about the creators behind these channels — especially given that the astronomic viewcounts seemed to appear out of nowhere, and most of the stars of the videos are silent and masked. There has also been some speculation within the YouTube community that superhero creators are forging views with bots — since ‘likes’ and ‘dislikes’ on many of the videos have been disabled, and a majority of the comments appear as gibberish.

Today, however, these conspiracies have largely been debunked. Toy Monster, for instance, has explained to skeptics that the majority of its views are coming from ‘suggested videos’ rather than subscriptions — which is how children, who also watch the same videos over and over again, tend to consume YouTube. In addition, the channel claims that oddball comments are a result of kids simply banging on their keyboards.

In an email interview with Tubefilter, one of Webs And Tiaras’ creators, Eric (who declined to provide his last name), insisted that the team has “never used any bots or any other method to increase our views.” Given the channels’ substantial numbers, he says, “If we were not respecting the rules, YouTube would certainly have taken notice.” Eric, who says his team is based in Canada, claims that there is no larger company behind the four channels, and that it represents a grassroots project among friends. They started their first kid-friendly channel, Toy Monster, in 2014, he says — which initially consisted of similar skits but using toys and action figures rather than costumed humans. “In the summer of 2015,” he explains, “we noticed a handful of channels that were doing superheroes in-real-life videos, and we thought that this would be a perfect fit for us.” It’s now their full-time careers.

The channels are partnered with leading MCN Studio71, whose COO, Phil Ranta, says the phenomenon came onto his radar roughly a year ago. Ranta attributes the success of superhero videos to a magical marriage between silent film and fan-fiction. “International audiences appreciate that there are no spoken words, which also forces the characters to represent the narrative physically and broadly,” Ranta tells Tubefilter. The fact that they are non-gender specific also helps.

And while there are many channels operating in the space today, Ranta notes that Toy Monster — serving as a progenitor of sorts — has pioneered unique formats, including the silent approach, the surreal storylines, and unmissable, neon-hued thumbnails. That said, “the roots of the trend can be drawn back to cosplay channels and fan-fiction videos, which have been around since the start of YouTube,” Ranta says.

Today, the superhero category has become so popular that established creators are hopping on the bandwagon. Davey Orgill, the patriarch of Christian family vlogging channel April And Davey, for instance, was perusing YouTube last year when he stumbled across the format and was blown away by the viewership stats. “So I showed my wife,” he said, “and we ordered some costumes and started making them.” In just three weeks, their channel, SuperHero Reality TV, was clocking 20 million views within a 48-hour period — and, Orgill says, the money started pouring in. To what does he attribute this overnight success? “Kids’ stuff is huge right now,” he says. “The videos are pretty much bringing together all the things that kids like — giant candy, fun music, squirt guns, lasers, flying, Spiderman, Elsa — it’s just all things kids like wrapped together into one. It’s absolutely mesmerizing to them.”

But not always. More recently, as noted by YouTube commentary channel h3h3Productions, some creators within the superhero space have taken a fetishistic turn with content that verges on pornography. Channels like Toy Family and Dennis Cee, for instance, frequently post giddy videos involving superheroes and feces or other sexually-charged scenarios. And while a handful of these videos boast seven-figure viewcounts, like the Webs & Tiaras videos, the majority are only clocking tens of thousands of views thus far — suggesting that they either aren’t as popular as more wholesome iterations or are being consumed by a different audience altogether.

To this end, while it’s natural that the category would devolve into different forms as it becomes more popular, parents would be remiss not to keep a watchful eye on what their children are watching.

Check out h3h3Productions’ deep dive into the darker side of this phenomenon below: