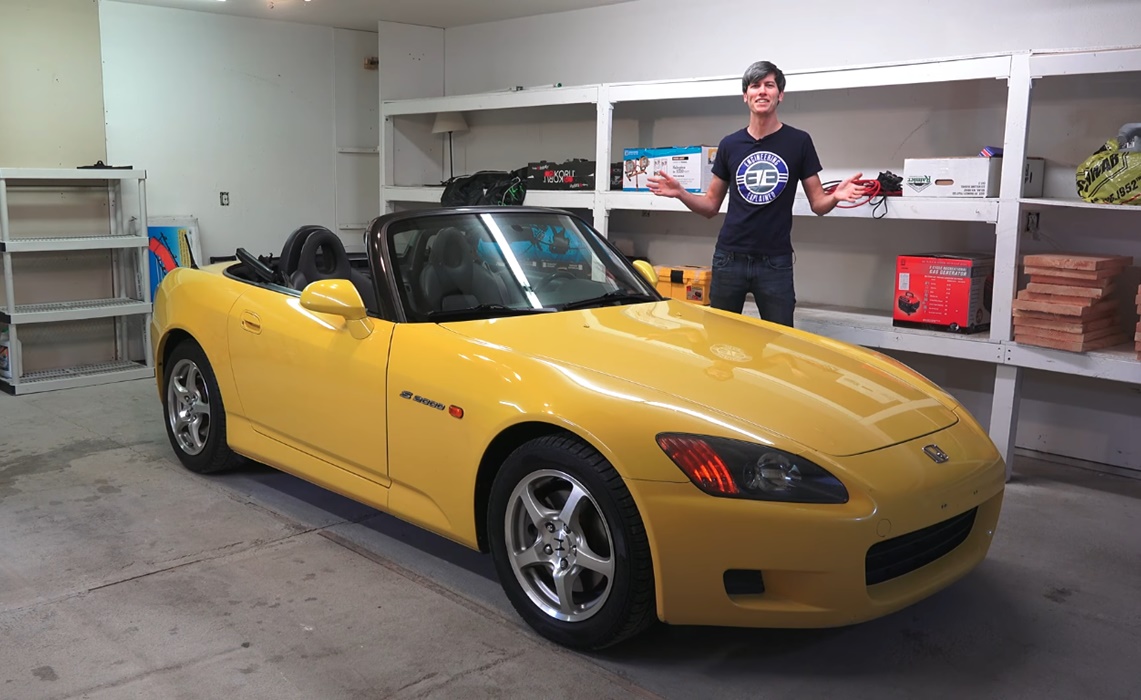 YouTube Millionaires: On The Engineering Explained Channel, “Every Sentence Has Value”

What do you do if you have an engineering degree and a strong interest in cars? If you’re Jason Fenske, you start a YouTube channel on which you teach viewers about the science of automobiles. Fenske is the man behind Engineering Explained, on which he explains the mechanics that make our vehicles go and shares his own adventures in the automotive world. Fenske, who is partnered with the GarageMonkey network, is part of a burgeoning community of car enthusiasts on YouTube. Here are some of his words on how he fits into his niche:

Jason Fenske: Once numbers get to a certain point, it’s difficult to fathom. 30 people fit in a classroom. Movie theaters can sit a couple hundred. Football stadiums in the tens of thousands. But a million is something completely different. I do a lot of traveling for the channel, and so I try to grab the sheer size of the audience when I’m flying into cities. Flying over Austin, San Francisco, Indianapolis, Charlotte – these are all cities with less than a million people, so you can look out the window and see all the homes, and know that even more than that is watching your channel. It’s incredible!

To my subscribers, I simply must say thank you for your curiosity, for adding to the conversation, for sharing your knowledge with me, for always trying to learn and improve yourself, and for sharing the content with your friends. That’s what it’s all about to me. We’re all curious people and we just want to learn. I spend a lot of time researching, and share what I learn with this crowd. I absolutely love the interaction.

TF: What is your engineering background, and what made you decide to share your knowledge on YouTube?

JF: I went to school for mechanical engineering and graduated in 2012 from North Carolina State University. Originally I started the YouTube channel as a passion project that I could point to on my resume and say, “Look, see, I spend time outside of school doing things relating to engineering, because it excites me!” It was a fantastic discussion piece in job interviews and definitely got me my first real job.

I was an application engineer and a test engineer for a forklift company for two years. One of my most educational experiences there was designing a liquid cooling system for an electric forklift, which were traditionally air-cooled. Quite a challenge! But our truck hasn’t yet overheated to my knowledge, years after the prototype build.

TF: What do you think is the most common misconception people have about how their cars work?

JF: Probably that modern cars do everything for you. Driver aids are great, and a common discussion topic in car culture these days is that cars drive themselves. First off, that would be fantastic, as there are plenty of people out there who don’t enjoy driving. I’m all for things going autonomous, as long as I still have my six speed with three pedals!

The Nissan GT-R often comes up in this discussion: “It’s a computer, it drives itself, requires no talent.” Most of these people have probably never driven the car, or driven it hard. You still need to know what you’re doing! I drove a 458, GT3, Gallardo, and GT-R back to back on a track. The only car I almost went off the track on was the GT-R, as I braked too hard going into a corner and had to counter the understeer I caused. The car doesn’t drive itself, it’s a humbling experience to drive one at speed. The car is way more capable than I am. A better driver would run circles around me, even if we both had all the “aids” enabled.

TF: What do you think is the most complicated concept you’ve explained on your channel?

JF: The way Torsen differentials work is a pretty challenging concept to grasp. It’s even more challenging to describe how exactly they pass torque from one wheel to the other. I did my best:

TF: What strategies do you use to keep your viewers engaged while you’re explaining these concepts?

JF: There’s a lot of fluff on YouTube. Intros, outros, pointless banter, etc. I try to keep my videos to the point. The goal is that every sentence has value, every sentence results in the concept becoming clearer and the topic better understood. There are certainly videos that are a bit dry, but if you simply want a video boiling down the facts about a subject, in as compact of a form as possible, I think the videos do a good job.

TF: Do you ever get emails from viewers asking for car repair tips? What’s the most interesting email you’ve ever received in that regard?

JF: The channel isn’t really focused on repair tips, moreso the engineering, science, and physics of cars, but as far as YouTube comments go, there are thousands of questions asked every month. It’s fun to interact and learn from one another. Something I like to say is that if my video receives 100,000 views in the first day, it’s guaranteed that there is someone who knows more about the subject is watching. There’s always something to learn from folks in the comments. When I posted a video on the Acura NSX with an NSX PR rep riding in the vehicle, some of the NSX engineers messaged her about watching the video. There are all kinds of brilliant engineers from companies like Tesla and GM who join in on the videos and provide feedback in the comments. It’s a fantastic community!

JF: I have two rules regarding sponsored content: it has to be educational and it has to be automotive (or relevant to the automotive industry). If it’s not both of these things, I won’t be making a YouTube video about it. I reject plenty of opportunities that aren’t a good fit. Ultimately you have to respect what your viewers would be interested in watching. I don’t want to watch a commercial, and neither do they! But if I can get on the phone with racing engineers and create a video that explains the technology a company is using, where you’d otherwise never have access to this information, I think it’s a win win.

Ultimately, sponsored content has to be interesting. It goes back to the theme of the channel being for those who are curious. If a company’s engineers want to explain the logic that goes into their product, the science of why it works, all of us can benefit from this knowledge.

TF: What is your personal dream car?

JF: There are a lot of cars I’d love to own. The new Mazda MX-5, the Jaguar F-Type R, and the Mustang GT350 all come to mind. I’ve also always liked the Rossion Q1, based on the Noble M400, but never driven one, so I can’t say if it’s as great as it seems on paper.

JF: My life is an unorganized mess. I never know much more than a few weeks ahead of what is definite, but I enjoy it that way. It’ll always be fresh, new, interesting. I’m hoping to start doing some modification to my Honda S2000 soon, but weather here is pretty terrible so I need to wait for temps to warm up. But there are definitely some cool travel opportunities on the horizon, which are going to make for some great videos!