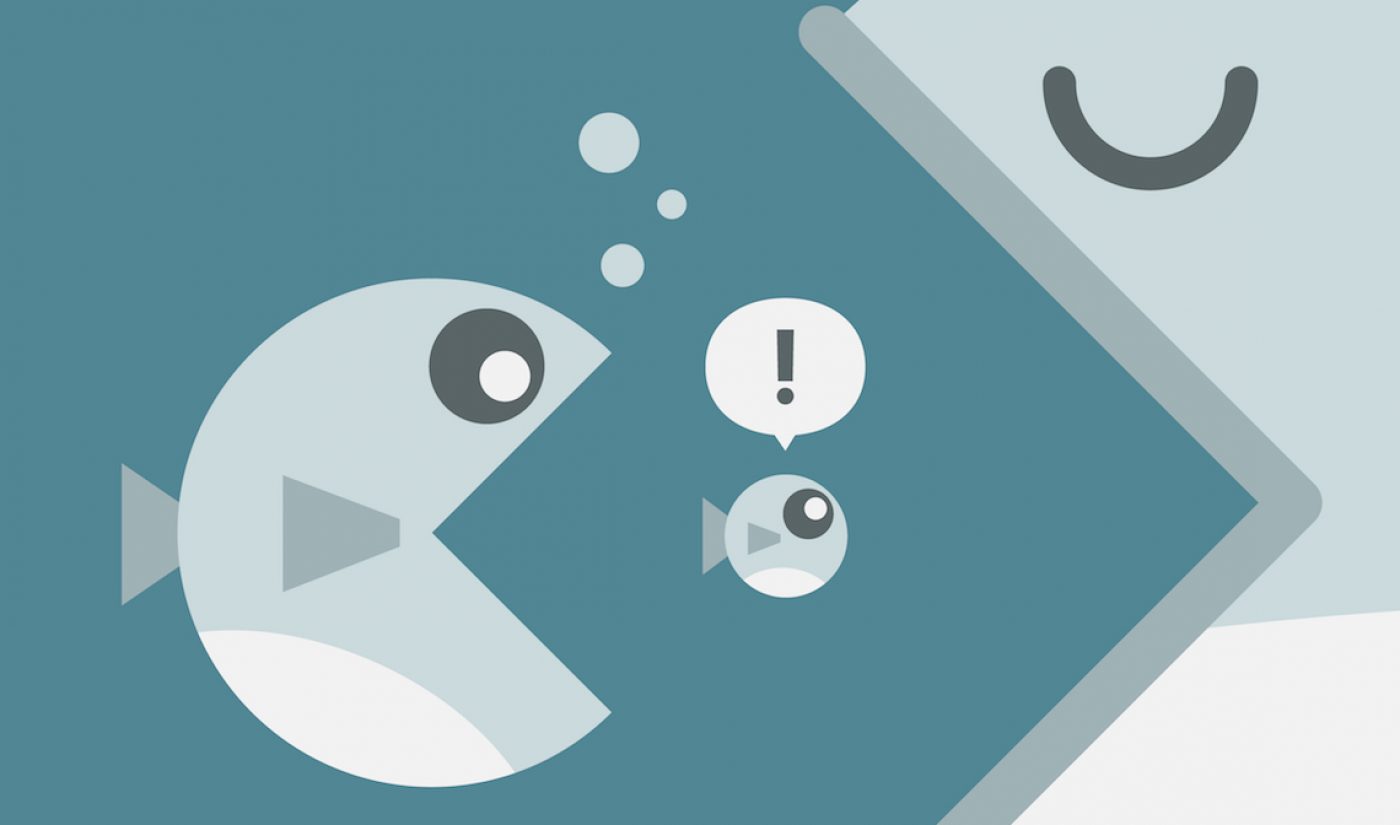 Is it possible that, within the next year, the most powerful people in Hollywood will be based in such diverse and unlikely entertainment meccas as Dallas and Dalian, Cupertino and Shenzhen, Mountain View and Philadelphia, Sunnyvale and Beijing?

Chances of this unlikely outcome seem better than not, actually, especially now that Hollywood’s holiday shopping season for media and entertainment companies has kicked into full gear following last weekend’s AT&T announcement that it wants to buy Time Warner for $85 billion.

To some extent, the deal shows a lack of imagination. After all, back in the First Internet Bubble, AOL bought Time Warner for (initially) $183 billion. And that was back when $183 billion was real money. Now, AOL is a small corner of AT&T’s biggest rival, Verizon, and Time Warner, though still big, is a much more digestible nugget for the telecom giant than even a few years ago.

AT&T and Time Warner have done business before, back when AT&T sold its cable TV operations. More recently, as Time Warner CEO Jeff Bewkes sought to skinny down his bloated and underperforming operations, he spun off those cable operations into a separate company. The cable operation since has been acquired and rebranded Spectrum by the fellow who once ran them, John Malone. AT&T disdained a second run in cable, but just finished digesting DirecTV, the satellite-TV provider, for $48.5 billion. And so the rondelay continues.

As those paragraphs suggest, corporate gigantism tends to run in cycles. We’re now in the Fat Season, with more to come, I’m certain. When I started writing this column about six months ago, it wasn’t yet clear if we were wrapping up a cycle (traditional media companies had bought up or into most of the best available digital-media targets), or starting a new bigger one (they were going to begin buying each other).

It’s now clear we’re definitely in the latter, after a summer where Verizon bought Yahoo; Disney and Comcast’s NBCUniversal doubled down on Vice and BuzzFeed investments; National Amusements told its two biggest units (CBS and Viacom) to consider re-merging; and Comcast bought DreamWorks Animation and its AwesomenessTV digital unit.

This new cycle of super-sized deals left me pondering What It All Means, especially for smaller digital companies and creators. So, a few thoughts:

Part of what’s driving the latest bigly initiatives is a concern among dinosaur media companies that we’re entering an extinction period. No huge meteor has hit, but business models are getting whacked by metaphorical bolides left and right. Investors want continued growth, which is hard when you’re already huge and your core business is built out, as with AT&T. Entertainment companies see size, and market power, as a way to insulate from the worst of the changing climate for their business models.

By contrast with all this, YouTube millionaires and similar up-from-nothing creators are doing pretty well, thank you, with few of these concerns. These creators should continue to thrive somewhat below the vision of the dinosaurs. They have their own audiences, increasingly vital distribution options, and more control over their core business. That said, digital up-and-comers should expect a somewhat chillier climate in Hollywood. There will be fewer, larger, and less nimble companies to do business with, an annoying consideration as creators try to evolve their careers beyond the YouTube mothership.

Take care of your audiences, young ones. They’ll be your savior.

Many have speculated whether regulators will approve the AT&T/TW sale. They point to the still-unfulfilled promises exacted when Comcast bought NBCU. Conversely, I think the AT&T/TW deal gets approved exactly because of Comcast.

AT&T/DirecTV/Time Warner would counterbalance the market power of Comcast. Of course, getting any deal approved during what looks likely to be a Clinton Administration – in its first term and hypervigilant about appearing too business friendly and with hawkeyed senators Elizabeth Warren and Bernie Sanders watching closely – still won’t be fun.

Malone and on and on.

Engineering the Time Warner Cable-Charter deal to create the nation’s second-largest cable TV operator wasn’t John Malone’s only summer project. He also midwifed the merger of mini-major studio Lionsgate and premium channel Starz. Lionsgate and Starz were each too small to thrive alone in the coming Gigantist Era. Will Spectrum now move to acquire Lionsgate/Starz, and/or another Malone-controlled property, Discovery Communications? This might be Lumbering Media Beast No. 3, especially if sensitive tax treatments can be utilized.

Is Verizon suffering buyer’s remorse about that $4 billion Yahoo deal? The company has discreetly shared its unhappiness over the tardy disclosure of a 2014 computer break-in that exposed 500 million Yahoo customers’ personal information. As a result, I suspect the deal’s value will get shaved, but will still go through. Yahoo investors should be glad to get whatever they get, and Verizon will go from hunting Old New Media to hunting Old Old Media on a Time Warner scale. Yahoo surely can’t be its last media deal at this point, can it? And neither is buying and closing Jason Kilar’s subscription video service Vessel (Verizon is keeping the tech and the CTO). If hunting is afoot, we soon may have Beast No. 4.

Fresh off its worst run of quarters in a decade, perhaps Apple will tap its $200 billion cash hoard to drive growth with content acquisitions. Here’s the crazy thing though: Apple, the world’s most valuable company, already owns a darned big media company. As Fortune pointed out, Apple’s Services division (which includes all its music, book, movie and TV operations among much else) has nearly doubled over four years, to $6.3 billion in revenues last quarter. By next year, the division is on pace, were it a standalone company, to make the Fortune 100.

That dwarfs Hollywood operations such as Viacom ($15 billion market capitalization). Apple executives said this week that they expect to get back to revenue growth this holiday season, no doubt bolstered by sales of the new Mac computers they announced this week. But another way to get some revenue growth might be to pick up a studio. Disney has been a dance partner since Steve Jobs sold them Pixar, which made him (and later his widow) the biggest shareholder of both Apple and the Mouse House. Hmmm, Beast No. 5?

Tencent has spent billions on online gaming, including L.A.-based Riot Games (League of Legends), to go with its massively popular messaging app, WeChat. Upstart LeEco made a big splash this month in San Francisco, announcing an array of interconnected products and devices, including a streaming-video service, smart phones and smart TVs. LeEco may need more content for its ecosystem beyond what it already has announced. And though the company plans to develop nearly 50 acres of former Yahoo property in Sunnyvale for up to 12,000 workers, I’ve met the company’s partnerships vice president, and he’s based in Los Angeles. So, Beasts 6, 7 and 8?

Netflix has a market cap of around $58 billion, but just took out an $800 million loan to finance more original programming, part of $5 billion in planned show spending this year. Will it decide that owning its own production facilities makes sense, and pick up a TV or film studio? Probably not, given its already substantial debt beyond that $800 million, but Reed Hastings may want to lock in a production pipeline.

Snapchat is probably still headed to a $25 billion IPO next spring, but if somehow, Instagram Stories and a soft economy blunt its growth, would it consider a sale? Conversely, might it be looking to get wider with an acquisition before it goes public? Both seem unlikely, but lots of cards are still to be dealt to this hand.

This group also includes Amazon, which is in Seattle, but has entertainment operations in Los Angeles that are run by TV and film veterans such as Bob Berney and Morgan Wandell. Google is pushing hard on original programming for pay service YouTube Red, and Facebook is betting big on virtual reality and live streaming. Facebook execs routinely speculate that most online communication will involve video within a few years. Maybe. And maybe one of them buys in somewhere.

Amazon already owns Hollywood resources such as IMDB to go with its studio operations. Old-line tech players such as HP, Microsoft, IBM, Intel, AMD, Qualcomm, and Oracle might surface, though it’s highly unlikely, even as chipmakers Intel and AMD have returned to Hollywood, flogging the entertainment (and chip-selling) potential of virtual reality. Just this week, Qualcomm announced a huge deal, $40 billion but it was for another chip company, NXP Semiconductors.

One to watch may be Altice, a 15-year-old Dutch-based telecom group whose first U.S. acquisition came last year, when it bought 70 percent of cabler Suddenlink for $9 billion (h/t to Marc Tayer on that one). Will any of these companies make a big pickup in consumer-facing entertainment or tech? I’m skeptical, but it is Fat Season.

A caveat is important here. We’re far into one of the longest economic recoveries in the country’s history. Post-election, the Federal Reserve may finally raise interest rates, with uncertain impacts on the economy, and on the availability of investment capital. We don’t know who will be president, which party will control each house of Congress, nor how they all will interact with each other after a fractious and difficult election season.

In Europe, the Brits are Brexiting into a self-inflicted disaster and major banks in Germany and Italy are in parlous shape. Even China has seen growth slow to a pedestrian 6% or so. So, is it reasonable to expect continued growth, easy investment capital and super-low interest rates? And if it all ends, what does that do not just to media & entertainment, but to the sustained bubble of VC funding fueling the tech boom?

It’s not a bad time to be a digital creator. But don’t let the dinosaurs step on you during their mating dances, here at the end of the Pleistocene.