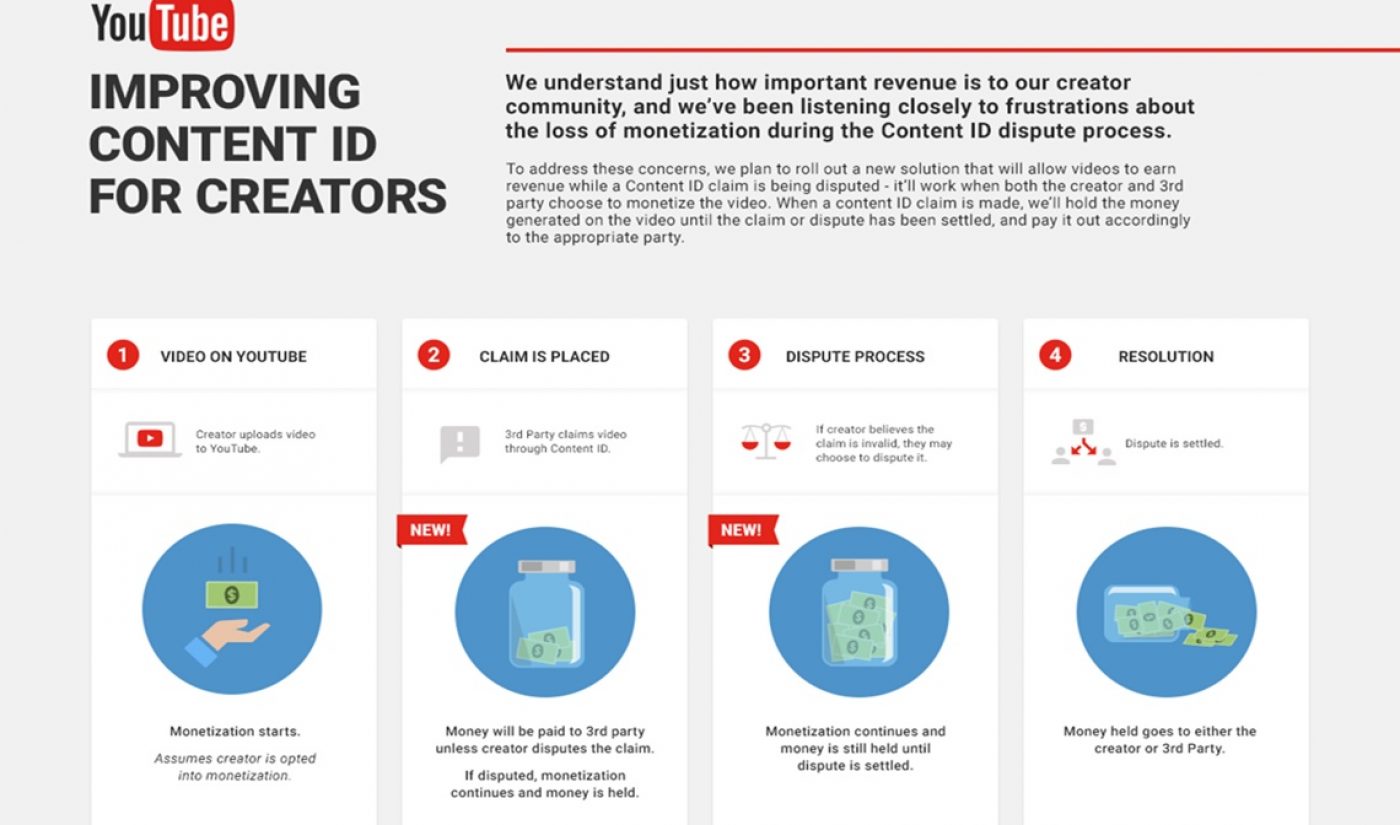 Over the past few months, YouTube’s Content ID platform has generated a lot of controversy. The digital rights management service, which lets rights holders identify, claim, and monetize unlicensed use of their intellectual property, has drawn criticism from creators who believe it puts too much power in the hands of claimants

Now, YouTube is responding. The video site has announced a change that will allow uploaders whose videos receive Content ID claims to accrue ad revenue on those videos as they contest the claims against them.

That’s not the easiest sentence to understand, but within the Content ID process, the change is a logical one. Every day, thousands of YouTube channels re-upload videos or use trademarked content without receiving permission from the original rights holder. In most of those cases, the rights holder files a Content ID claim, the claim is accepted, and the rights holder can choose whether they want to take down the infringing video or take any revenue it generates.

Not all of these claims, however, are genuine. Some are launched by copyright trolls who want to make a quick buck off uncontested videos. More commonly, rights holders who feel slighted by the manner in which their work has been used will file a takedown claim, even though the video they are attacking is protected by the legal doctrine of fair use.

Take, for example, Doug Walker, better known as The Nostalgia Critic. Walker’s videos frequently use short films of films and TV shows to comment, criticize, and satirize those works, and in most cases, they are protected by fair use. Some rights holders, however, have filed claims against Walker, believing him to be reusing their clips illegally. Walker then contests the claims, as is his right, and usually wins his appeal.

In the past, this process presented a big problem. While Walker contested the claims against him, monetization on his claimed videos was turned off, and therefore he was losing out on precious ad revenue. Not anymore. Now, after a claim is contested, it will continue to generate ad revenue. When the claim is resolved, YouTube will pay out the accrued revenue to whichever side ends up with control of the video.

This change will be a much-needed lifeline for creators like Walker, whose videos toe the line of fair use. Now, instead of worrying about ad revenue, they can focus on contesting the claims they believe are invalid. It’s YouTube latest step to support creators who properly reuse content; previously, the video site offered legal assistance to certain creators who fight court battles related to fair use.

In a blog post, YouTube said it chose to enact the new change — which it hopes to push live in the coming months — after listening to feedback from its community. Therefore, if there are other ways you’d like to see Content ID change, you should get in touch with the video site yourself. In the meantime, creators can celebrate a big victory, but they should remember that fair use doesn’t apply automatically. To read the rules of the doctrine, click here.