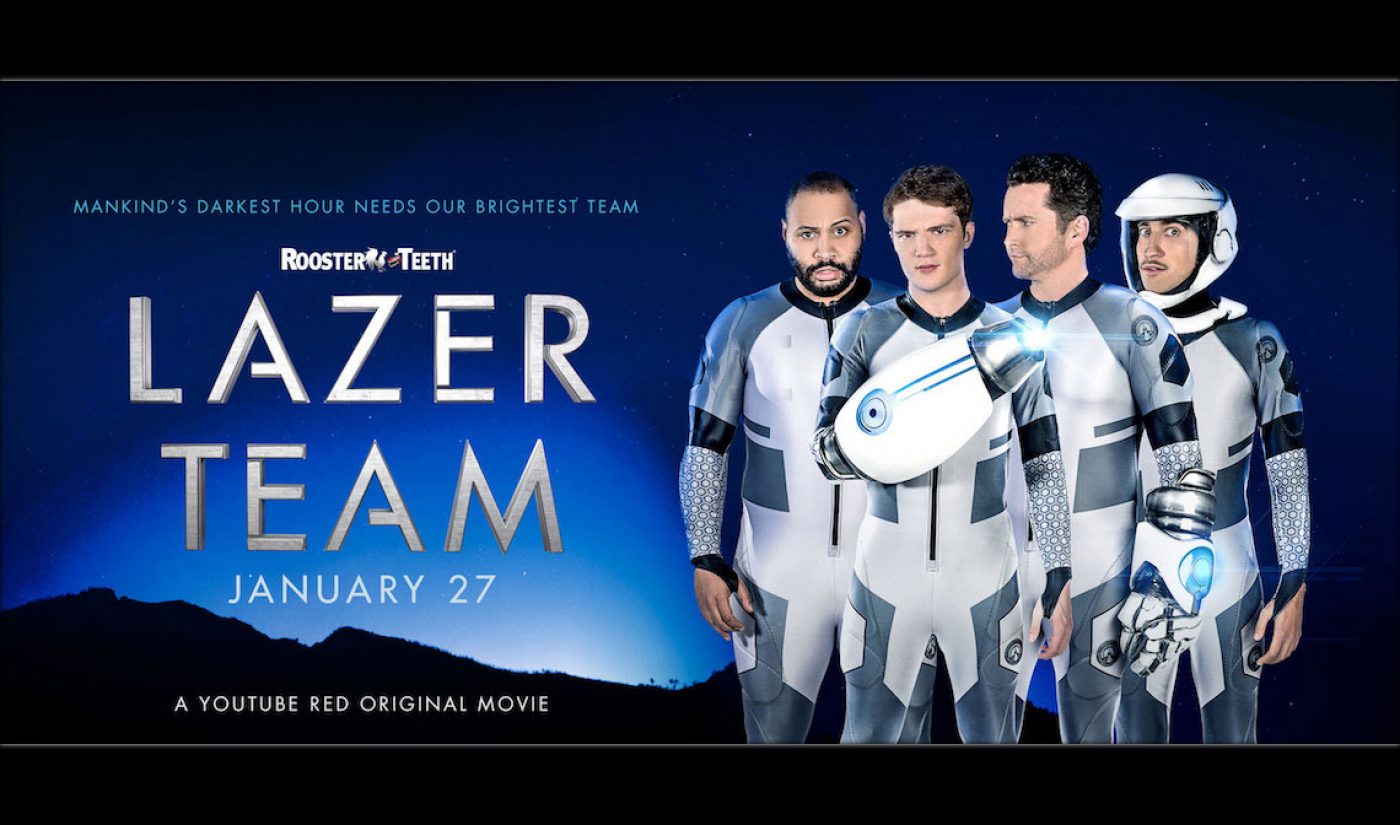 Lazer Team is the highly anticipated feature film distributed in part by YouTube’s new subscription service YouTube Red, produced in partnership with YouTube multichannel network Fullscreen’s new film banner Fullscreen Films, and created by one of the longest-lasting and most iconic creators of online video entertainment Rooster Teeth. If that pedigree is somehow not enough to guarantee the flick’s place in history as a case study for how major motion picture gets made in this new entertainment paradigm, then this next stat certainly will cement its position as something Hollywood executives won’t soon forget.

Lazer Team just passed $1 million in worldwide theater ticket pre-sales. And it did so by way of a disruptive distribution strategy that made use of grassroots support and Rooster Teeth’s fervent fan base from all around the globe.

Tugg is powering Lazer Team’s theatrical release. It’s a platform that self-describes as enabling “individuals, groups, and organizations to set up personalized screenings in theaters across the country.” In practice it works like this:

And in the specific practice of Lazer Team, Tugg’s platform has accounted for the aforementioned $1,000,0000+ in ticket sales across more than 500 theaters.

Considering this kind of film and this kind of distribution strategy is more or less unprecedented, the question remains, “Are those numbers good?” To put them in perspective with recent traditional box office numbers, the Zac Efron and Robert De Niro vehicle Dirty Grandpa debuted on 2,912 screens in the U.S. to a $11.1 million gross. That means in its opening weekend, Lazer Team (a film with no major studio backing nor promotion) debuted on roughly 17% of the screens as Dirty Grandpa (a film that’s been marketed a ton with incredible star power and studio backing) and has already grossed around 10% of its opening weekend box office. Doesn’t seem too bad, right? Fullscreen’s CEO agrees.

“Lazer Team’s success is a testament to the power of the Rooster Teeth community,” said George Strompolos, Founder and CEO of Fullscreen, and Executive Producer on Lazer Team in a statement. “We are reimagining what a modern studio can achieve and look forward to bringing more great content like Lazer Team directly to fans worldwide.”

Tugg’s CEO obviusly believes this is a big win, too.

“We’re thrilled to partner with Rooster Teeth, and Lazer Team’s success proves the power of cinema on-demand – a loyal audience really getting behind a movie and making it a box office success,” said Nicolas Gonda, CEO of Tugg, Inc. in the same release. “This is the new blueprint for how the small screen can crossover to the big screen. We salute Matt, Fullscreen and the entire Rooster Teeth team for modeling how creators can embrace Event Cinema and empower their community. We look forward to replicating this success with other creators and video platforms.”

You can check out Rooster Teeth’s Lazer Team at a theater near you (if there are still tickets), or via YouTube Red in early February 2016.