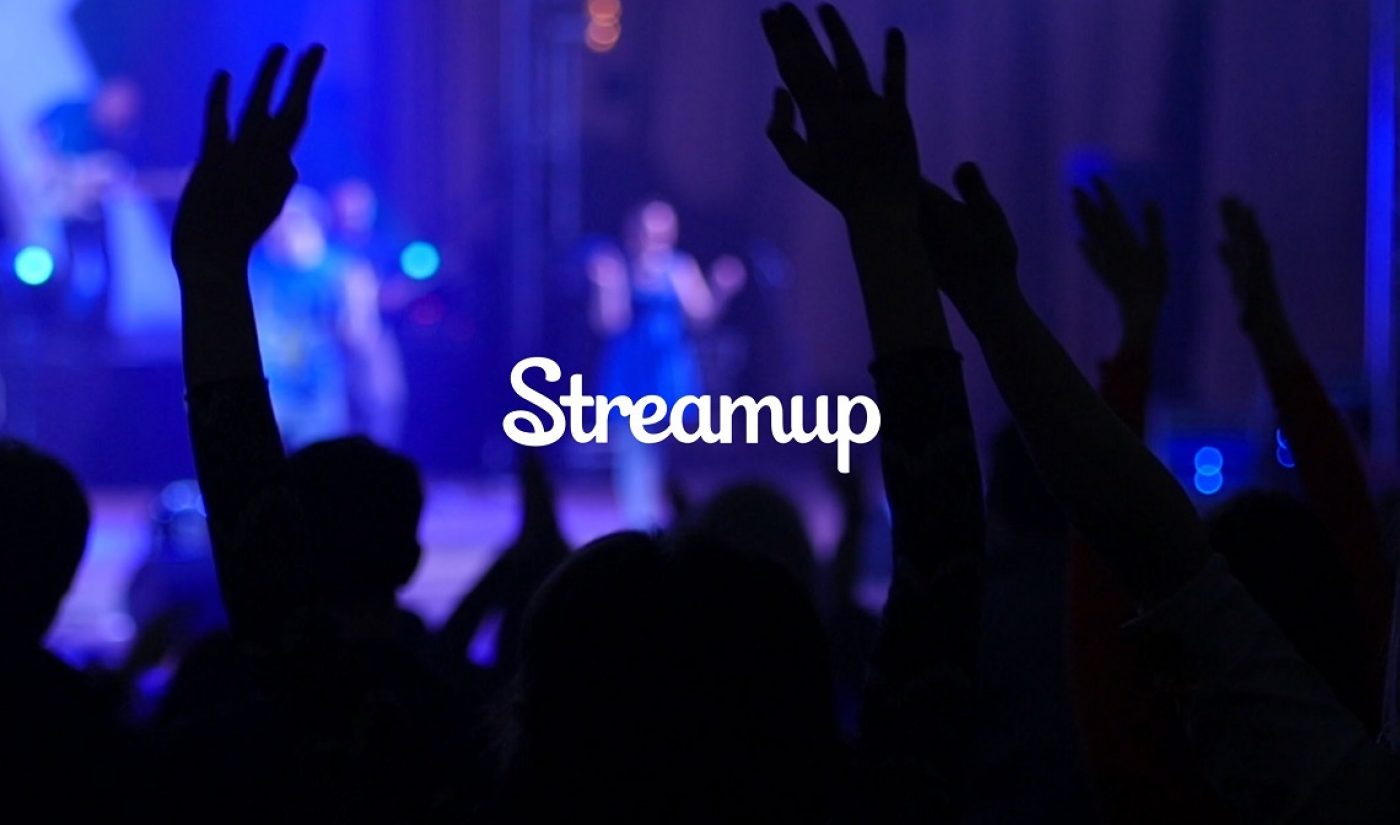 Will Keenan has had a very busy last few months. The online video executive and former Maker Studios Vice President left his position as President of Endemol Beyond USA in August 2015. A month later, Keenan announced his move to the live streaming startup Streamup, where his role is President and Chief Content Officer.

As his new position indicates, Keenan is bullish on the immense potential live streaming offers digital creators and the entire online video industry as a whole (both in terms of exposure and revenue-generating potential). The Streamup President will appear at Stream Con NYC at the end of October to speak about his views on how live streaming is the next form of television, so Tubefilter decided to catch up with him beforehand to talk all things live broadcasting and Streamup’s role in this burgeoning video realm.

Tubefilter: Why start another live streaming platform? What does Streamup offer that other platforms don’t?

Will Keenan: If Periscope’s recently been called “the Twitter of live video” then Streamup’s now becoming “the Netflix of live video.” Streamup’s the first Premium Live-Streaming Platform (PLP? 😉 ) and we’re just now starting to make history by also becoming the first live-streaming platform to actually develop, finance, and produce original, high-quality live series and interactive shows (…and many in partnership with star talent & top content creators from both the traditional & digital spaces).

Live-streaming is one of, if not THE fastest, growing form of content in the digital space, and within just our first year Streamup attracted a huge, very engaged global community audience of over 21 million monthly active users (and still growing fast!) where our creators and StreamupStars can produce very high-quality premium live content. The company’s initial focus when founded last year by genius Kyle Michelson was as a group video-chatting platform, and when Streamup started experiencing a massive growth explosion of its user-base and viewership it was actually the global Streamup community itself that led the way in the direction to our recent premium enhancement of the platform by offering Pro-streaming tools and audience engagement features that go beyond any other platform. Streamup provides an entertainment experience that’s truly “TV for the digital age.”

TF: How has the reception been for Streamup? Can you give us stats or stories you’re proud of?

WK: The reception to Streamup from millions of people around the world has been overwhelmingly positive, and Streamup’s gigantic growth of streamers and viewers in such a short time very well may be unprecedented. In less than one year, Streamup’s user-base exploded from 10,000 monthly active users (MAUs) to well over 21 million today. One of the most impressive aspects to me about Streamup’s ground-breaking rise in popularity in record time is the fact that so far it’s only been on desktop! We now launch our mobile Streamup apps for iOS and Android during these next few months, and I expect Streamup’s over-21 million monthly active users to increase even faster as well as get much bigger.

TF: What is the internal Streamup team most excited about for the company?

WK: During the company’s first year, Streamup purposely stayed under the radar and maintained a low-profile but then they brought on board a guy like me as President of the company. 🙂 So now, in addition to the upcoming launch of Streamup’s mobile apps, we’re also moving full-speed ahead on our incredibly generous monetization plans for creators since one of Michelson’s and my main goals is for our talent and creators to make a real living with live-streaming by empowering our stars to create the highest quality content of any live-streaming platform. I’m personally also very excited to launch Streamup’s many original live programming initiatives. Streamup’s overall mission is to create original premium live series and high-quality interactive shows that surpasses anything seen on TV.

TF: Tell us a bit more about Streamup’s ideas for developing talent and live TV programming.

WK: There are currently many great talent on Streamup building massive global audiences, but even though Streamup’s already huge as far as audience, this is really just beginning of Streamup’s creation of another “star discovery” system. YouTube created its own “star system,” as then so did Vine, Instagram, and Snapchat, and right now is THE time to actually become a Streamup Star (and one who is actually able to make money creating high-quality content). In addition, I’ll soon be announcing top talent in production deals that will premiere new live shows on Streamup, and I’ll also be announcing a number of major strategic partnerships with prolific content companies and top series producers.

I think it’s high-time and quite possible to now develop online a new live variety show brand that can last for 40 years, much like Lorne Michaels did with SNL on NBC. I can also envision creating a live, breaking news brand hosted by young influencers (much like CNN was able to do did on cable many years ago). And just imagine people’s favorite TV or online series format genres now becoming LIVE shows. Live prank shows, live beauty tutorials, live reality shows, live comedy, live music, live shopping, live movies, the possibilities really are endless. Just look at the huge viewership at what’s been called the “slow content movement” where fans will watch a live-stream for eith months to see eggs hatch like NYU’s “hawk cam.”

Streamup’s already currently in development on many these concepts and more. We’ll soon start announcing premiere dates of all our original live shows and exclusive programming, so GET RRREADY! 🙂

TF: Live streaming video games has obviously done really well for platforms like Twitch, but where do you think the live streaming craze is going to go next in terms of content/programming over the next few years? And what place will Streamup have in it?

WK: Each platform seems (or actively attempts) to have its own unique approach; some will be focused on gaming like YouTube Gaming and Twitch, others are more regional like YY in China, and some are User-Generated-Content-quality “one-click” services, etc.

At Streamup, we’re laser-focused on our our large, global audience of 16-35 year olds who have long since cord-cut their cable plans, though still desire to consume anytime and anywhere quality entertainment. Everyone can think of Streamup as not just a live-streaming platform and more as a real-time entertainment platform. What we’re doing at Streamup (and I hope others are able to soon follow) will ultimately completely replace TV.

TF: What kinds of creators are seeing success on Streamup?

WK: The new Streamup Stars and content creators on our platform are seeing success across all genres, from talk shows, music series, podcasts, Q&As, live cooking formats, gameplay, you name it. But the overall metric leading to success on Streamup has been high-quality, entertaining content.

There’s less of a UGC-type feel on the Streamup platform unlike other live-streaming services, so Streamup’s been said to not really be the real-time platform for any “rando just streaming himself walking his dog” or “some suit streaming his quarterly earnings call.” Moreso, the type of content succeeding on Streamup is of a higher quality and usually very well-produced by talented creators. Streamup also happens to have a huge audience all over Asia who really seem to enjoy watching live karaoke, gambling, and more.

TF: What are some of Streamup’s goals for the coming year?

WK: Over the next year, Streamup will continue to launch new stars, will keep growing massively, will launch many successful premium original live series and interactive shows, and will further experiment with innovative ways to facilitate the creation of original content and support for new technologies to make the entire experience even more immersive. In short, it’s gonna be a very big year ahead for Streamup. #DiveIntoLIVE #TurnupStreamup

You can hear more from Keenan and other online video executives at Stream Con NYC. Get your tickets here.