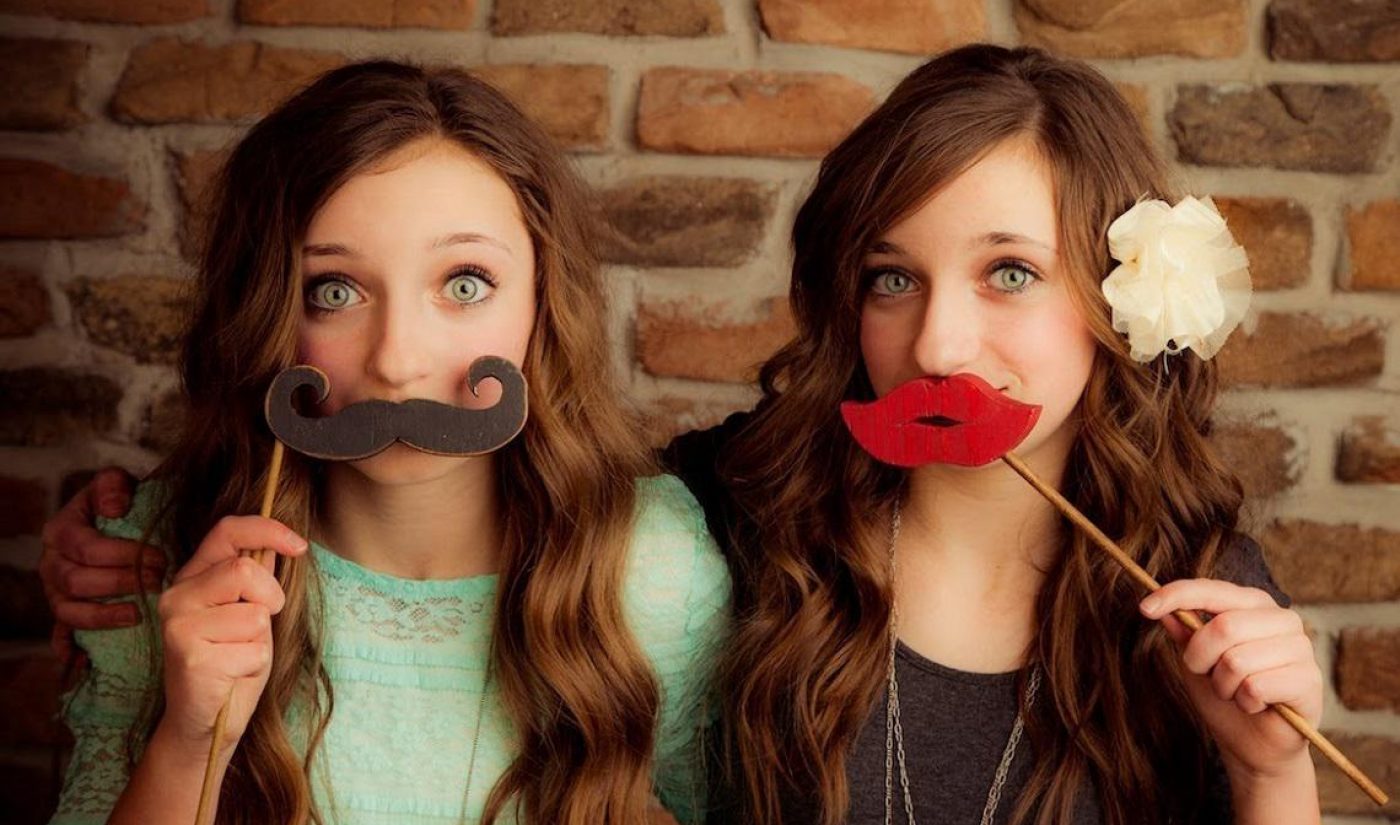 Sisters Brooklyn and Bailey have come quite far in only two years of running a YouTube channel. Granted, the pair of 15-year-old identical twins hails from the family that runs the CuteGirlsHairstyles YouTube channel, so they have that experience in their favor. On their own, though, Brooklyn and Bailey’s quirky personalities and lifestyle, fashion, and comedy content on YouTube has attracted one million subscribers. We asked them about their quick rise to fame, and here’s what they had to say:

Tubefilter: How does it feel to have 1 million subscribers? What do you want to say to your fans?

Brooklyn and Bailey: Reaching one million subscribers almost felt unreal! It’s such a huge blessing to be able to meet them in person wherever we go, one of the best benefits of what we do! We would just like to tell our viewers (we prefer to call them “friends”) thank you so much for supporting us and letting us do what we love! We love every single one of you and can’t thank you enough for allowing us to be a part of your lives!

TF: Why did you originally start a YouTube channel? Did your mom’s success with CuteGirlsHairstyles have anything to do with it?

BB: Back in 2009, our mom began her channel CuteGirlsHairstyles where we acted as models for the hair. In those early videos, we rarely ever talked or showed much of our faces due to the safety concerns of our parents. Once the CGH channel took off, the subscribers commented that they wanted to get to know us kids a little more (some of them didn’t even know that we were twins, until they saw us together in our first video LOL)! So at about age 11, we begged our parents for our own channel and they told us we they would think about it after we turned 13. In March 2013, our BrooklynAndBailey channel launched and it’s been a great 2 ½ years since!

TF: What’s it like being in a family of YouTubers?

BB: Fun fact… we are actually YouTube’s first “2nd Generation” million-subscriber family! That basically means that our parents own a channel that has hit 1 million subscribers, and we as their kids also have a channel that has passed that mark! Being a YouTube family is unique, meaning that we all participate in the making of the videos with everyone knowing their part… even down to our 4-yr old baby sister who knows that filming means “quite time”! It’s almost like one big fun family project!

TF: You managed to hit 1 million subscribers in just two years. How did you manage to do that? Any tips you can share with readers?

BB: We managed to hit 1 million subscribers in less than two years, which was super exciting! We know that being part of the CuteGirlsHairstyles family channel gave us an already-engaged fan base that was hungry to learn more about us. When we announced that we had branched off with the B&B channel, the CGH subscribers came over by the tens of thousands! It was almost like they couldn’t get enough of us after wanting to know more for so long. It felt great to know that they loved us beyond just the hairstyles. Our growth since has been organic, with so many of the subscribers not even knowing who our mom is!

TF: What is each of your favorite videos that you’ve made to date, and why?

BB: We have lots of favorite videos! Last year we filmed our wisdom teeth video, which is a fan favorite, and in May we posted our Expectation vs. Reality “Last Day of School” video! Those two videos have millions of views and were so fun to film and hilarious to watch! Our favorite collab videos were “The Other Parent Trap” parody with Studio C, and our cover of Lennon & Maisey’s “A Life That’s Good” featuring Peter Hollens! Both of those were so much fun to film because they allowed us to explore beyond our comfort zones into acting and singing.

TF: What’s the best part about being twins on YouTube? The worst?

BB: The best part about being a twin channel on YouTube is that so many people have a natural curiosity about twins. It give us the opportunity to show everyone what its like to have someone who looks and talks just like you. Although we are identical, we have completely different personalities that show through in our content. Part of the success may be that that if a viewer doesn’t relate with one of us, she/he might relate with the other twin instead! Also it is amazing to live, share, and experience all this with someone who completely understands! We have a built-in friendship, and hope to be making videos until we are old grannies! The worst part about being a twin on YouTube, or in life, is always having to answer the question, “Which one’s Brooklyn, and which is Bailey?”

TF: Fans really seemed to love your Parent Trap parody with Studio C. What did the planning and production process look like for that video?

BB: The “Other Parent Trap” Parody with Studio C was one of our favorite videos ever! We had been superfans of their show for a very long time, and we adore their skits! We shouted out to the Studio C channel last November, and after they saw such a huge spike from that, the writers began working on a collab video idea. Of course, the Parent Trap theme was perfect since twins always dream of switching places! The filming of the video was very different from what we are used to, given that they had makeup artists, stylists, a producer and director, extras, a set, and an “actual” script! We just kind of soaked it all in, observing the shots, learning everything we could, and the video turned out perfect! The Studio C cast was so supportive and hilarious, it was difficult not to have a great time! (Acting wasn’t totally foreign to us, as we had a small role in a movie called “Food Boy” when we were seven.)

TF: Your most popular video is where the two of you got your wisdom teeth out. Why do you think that video did so well? What’s it like watching yourselves go through that entire process?

BB: The wisdom teeth video is our most watched video by far! We think the reason for this is because you can’t plan the reaction! For identical twins, our anesthesia-induced emotions were exactly polar opposite with one twin happy as a lark and the other so super sad! It was the interaction between us that has people laughing and watching the video over and over again! Another reason we think this video was so successful is because it is so relatable! Most teens have to get their wisdom teeth out eventually, so naturally they are curious to see what that process is like!

TF: If there was one video you could make about a topic unrelated to your channel’s current coverage, what would it be about and why?

BB: We really try not to tie our channel down to one specific type of video. We’ve covered everything from fashion, cooking, hauls, makeup, DIYs, and now sketch comedy with Studio C. The one music cover we filmed, Lennon & Maisey’s “A Life That’s Good”, lives on Peter Hollens’ channel, so we’d really love to explore more with music on our own channel!

TF: What’s next for your channel? Anything fun?

BB: We’d really love to do more with music on our channel, since we both enjoy singing. We are working on some stuff there, so stay tuned! People also comment often about how beautiful our eyes are, wanting to learn our eye makeup routine, etc. Starting our own mascara line is something we’d love to do, and we could literally sell millions! A clothing line, oh – the possibilities! We are only 15, but we can dream… right?