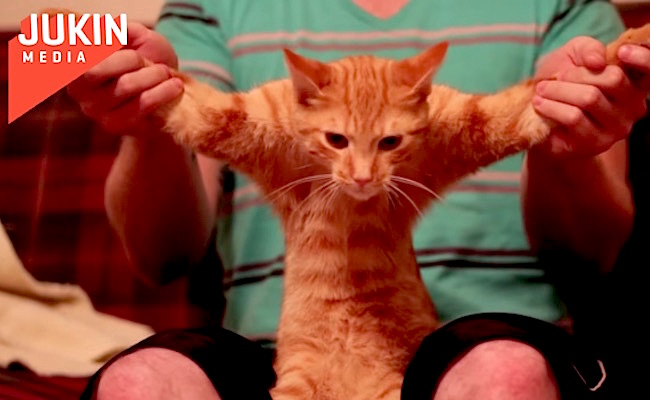 In Defense Of Cat Videos: An Open Letter To Jerry Seinfeld

While you must still be reeling from the ugly and unfortunate incident in what was seemingly an otherwise stellar Upfront presentation for Crackle, I’m here to help. The incident I’m referring to, of course, was when you brazenly and bitterly lashed out against poor, unassuming user-generated video content (UGC). “The less the better,” is the way you put it, while likening YouTube to a garbage bin.

I’m here to tell you that I understand your frustration; I feel your pain. It must be extremely difficult to cope with the fact that a talent like yourself, who puts a lot of energy and resources into honing your craft and creating great content, gets completely and totally outperformed by videos like ‘Teacher gets hit in crotch,” and “Bad cat breaks glass.”

Bottom line: it’s not fair. While you toil away writing jokes, taking meetings, lining up distribution partners, and booking celebrity guests, some guy out there will point his camera-phone at his dog, and his video will get shared more times than an entire season of your highly produced, high quality, very funny web series. I’d be salty about it too.

The big surprise here, more than anything, is that you aren’t already resigned to this hard fact of life. The rest of the online video industry deals with this on a day-to-day basis, and they just accept it as fact; people love user-generated viral videos. Perhaps because you had such a remarkable run in traditional television, it’s been difficult for you to wrap your head around the possibility that UGC is a very real, very profitable form of entertainment in 2015.

You mentioned that your truly entertaining series Comedians in Cars Getting Coffee recently reached 100 million views over its history, so I want to congratulate you on that very nice, cute, milestone. I hope I’m not throwing salt in the wound by mentioning that our UGC videos generate well over one billion views per month for a fraction of the cost.

So, Mr. Seinfeld, the next time you’re flipping through TV channels or browsing the web, if you keep an eye out, you’ll see viral UGC videos everywhere; they’re licensed for use and integrated into news broadcasts, morning shows, day-time talk shows, primetime network TV shows, and late-night comedy shows. On the web, on a daily basis, you’ll see them in your Facebook feed, you’ll see them from your favorite digital publishers, you’ll even see them on premium OTT streaming services. Today, even brands embrace UGC for ad campaigns.

One of the best things about using UGC, as many brands and producers have learned, is that they actually don’t need to deal with the talent you think is so critical for good programming. In our world, the content is the “talent.” Of course it does not hurt that the cat in the video doesn’t demand a trailer on set or throw temper tantrums because they don’t have the right flavor of Perrier.

Maybe the best way for you to feel better about all of this is to sit back, crack a beer or pour a glass of wine, and tune in to FailArmy, the king of programmed UGC fail videos. This week they’re showing “Goat gets head stuck in bucket” among other vids; despite your apparent disdain for this content, I guarantee you’ll find it hard not to laugh.

Lee Essner is President and Chief Operating Officer of Jukin Media, overseeing strategy, product, legal, and finance for the company. Previously, Lee founded AccessDNA, served as COO of WeddingChannel.com, and served as EIR at Idealab, in addition to acting as advisor and mentor to more than 20 start-ups. A Bar Certified Attorney, Lee earned a BA in economics and business from UCLA and a JD from the University of Southern California Law School.