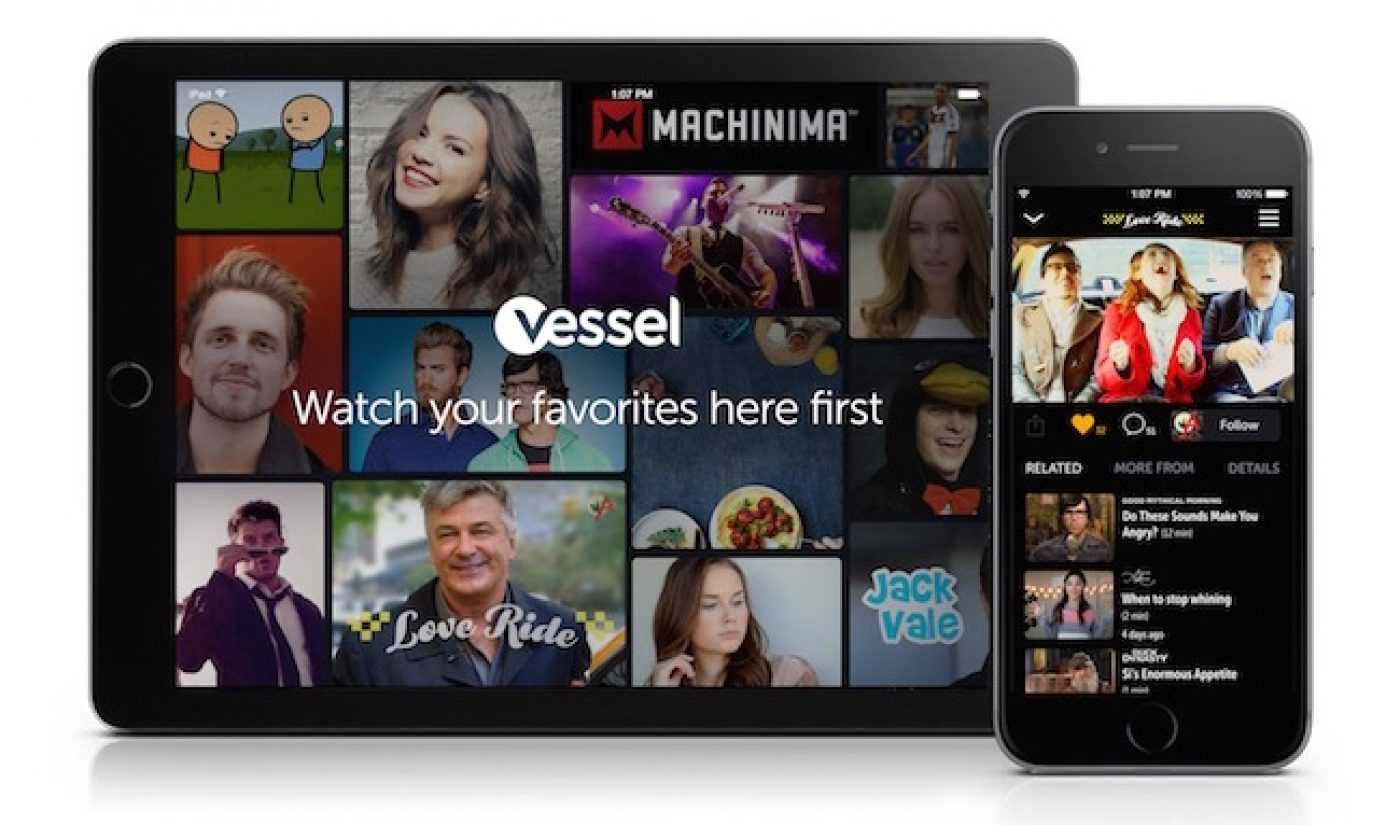 Jason Kilar left his role as the founding CEO of Hulu back in January 2013. What did the then-41-year-old do after collecting his reported $40 million payday from his stint at the video platform he grew into a billion-dollar business with more than $695 million in annual revenue?

Kilar got to working on his next venture, an online video platform dubbed Vessel he hopes will revolutionize the industry as it opens up for invite-only beta on January 21, 2015.

When Kilar tells the story of Vessel, he pays particular attention to a bright Los Angeles day in May 2013. Fueled by his entrepreneurial spirit, he had set up shop in an office in Santa Monica with Rich Tom, a close friend and Hulu’s former CTO. Kilar and Tom would spend their time plotting their next venture on whiteboards. The ideas ran the gamut from technology-focused ventures, to SaaS products, to media initiatives. “We always came back to the media ones,” Kilar said in an interview.

Then, one afternoon, after a daily post-lunch walk on the Santa Monica Promenade, a particular media-based idea made it off the whiteboard and into reality. During that stroll, the two ex-Hulu execs discussed how, despite all of its content, the online video world operates on a narrow distribution model, especially when compared to TV and film.

20 months later, Kilar refers to that walk as his “a-ha moment.” That revelation became the driving force behind Vessel, an online video platform that has officially opened its doors and hopes to revolutionize its industry by using exclusive windows to offer content creators an unprecedented level of revenue.

The Pitch to Creators

Vessel’s model is a complicated one that involves both ad-supported and subscription-based platforms, at least three different revenue streams, and multiple types of advertising formats. In its simplest form, however, Vessel’s appeal boils down to a trio of PowerPoint slides Kilar showed us during a recent presentation.

The first one shows the distribution model used in the film industry. At the far left sits theatrical release, where most films rake in the majority of their revenue. As the graph moves to the right, it travels through platforms like home video, streaming video on demand, and cable TV. At each stop, the film’s revenue slopes downward, but there’s still money to be made. Kilar explains that this model allows films to cater to many different types of viewers. If you’re a huge fan of musicals, you’ll go see Into the Woods in theaters. If you’re less interested, you can catch it 13 months later on your iPad.

Kilar’s next slide reinforces this point by showing the TV industry’s distribution model, which operates similar to film. At the far left is the first-run broadcast window that caters to mega-fans who want to watch their favorite shows live. As shows move toward syndication, revenue declines, but there are still plenty of chances for casual fans to tune in. The current online video industry differs from the film and television industries in that there are virtually no established distribution windows. While sites like Vimeo are experimenting with windowing content from major online publishers, YouTube still accounts for the vast majority of the viewership, and on that platform there are no windows, few premium offerings, and no additional revenue opportunities for most creators.

With that in mind, Kilar envisions the new online video playbook looking something like the slide below. Just picture YouTube being listed on that second “Free Ad-Supported” section of the graph, too. At the far left of these charts, Kilar hopes, is where Vessel will thrive. It is the “first window” for the Internet, through which superfans can watch their favorite creators in a more lucrative way. It’s a site that can function like a weekend box office for the online video community, all without interfering with casual fans who would rather watch videos as they debut for free on YouTube. It’s a smart idea, and when you hear Kilar describe his plan, it’s easy to get on board.

As with Hulu Plus, accessing Vessel’s exclusive windows will require viewers to both pay a monthly subscription and interact with advertisements. This may seem like a big hassle for the super fans Vessel hopes to attract, but neither source of revenue seems particularly intrusive. The monthly subscription fee to view premium windowed-content is a mere $2.99, and it gives purchasers access to all of Vessel’s content.

The Pitch to Advertisers

The ads on Vessel look very pretty. They come in two forms: Some will appear as a “brand’s motion poster” that pop up as each user scrolls through Vessel’s site. Kilar showed off these ads on his iPad; one popped up as he flipped through Vessels’ various categories, and he noted how users could choose to either flip right fast this obstacle or spend some time taking it in. The second ad format are typical pre-rolls ads similar to the ones you’ll find on YouTube, but they don’t last for more than five or six seconds.

If these ads are so unobtrusive, skeptics may ask, why would brands want to utilize them in the first place? Kilar claims Vessel’s short-but-punchy ads improve both brand recall and brand favorability among users who view them, and he marked those categories as the two most important for advertisers. Sure enough, there are already plenty of brands on board for Vessel’s launch. We’ve learned the company has deals in place with Corona Extra, Chevy, Land Rover/Jaguar, and Unilever’s Axe, Dove, Suave and St Ives brands, among others.

These multiple revenue streams could potentially add up to big dollars for the creators who make use of Vessel’s exclusive windows. Creators will keep 70% of all ad revenue, which is a far more favorable split than the one YouTube offers. All revenue generated from subscriptions will be collected in one large pool, and Vessel will dole 60% of that pool to creators based on the amount of watch time they each generate on the site from their window content.

Add together those two separate sources of revenue and Kilar says creators can expect to see an effective $50 CPM (which is significantly higher than the advertising rates seen on YouTube, though those CPMs are increasing). Plus, any creator who directly brings new subscribers to the site will see an additional $7 per subscriber “bounty bonus” on top of any other earned revenue.

With such big earnings potential and strong advertising rates, success on Vessel also doesn’t require a huge number of views. Kilar believes that if just 5% of a creator’s fans join the site, that creator’s annual advertising revenue will double.

At the same time, Vessel users are not required to make use of the exclusive windows. The site also has a free tier, which works similarly to YouTube and which Kilar describes as another platform on the ad-supported web. At launch, he expects the majority of the YouTubers he has recruited–but not all of them–to maximize their profits by posting videos on Vessel at least 72 hours before they’re uploaded to YouTube and/or other platforms. He noted that some users may post their videos exclusively on Vessel as much as a year before they debut elsewhere.

What Creators Have Signed Up So Far?

And who are these YouTubers? They’re an impressive bunch, with billions of views and tens of millions of subscribers between them. They are individual creators like Shane Dawson, Connor Franta, and Ingrid Nilsen and larger networks like Machinima and Tastemade. They will be joined by prominent musicians thanks to Vessel’s deals with the “Big Three” record labels, as well as media brands like Sports Illustrated and BuzzFeed. Not all of these channels will utilize Vessel’s early access model, but their combined presence on the site will bring a larger user base to the site.

Here, courtesy of Vessel, is a partial list of the creators who have joined in recent weeks and plan to debut their programming on the platform:

The above creators join another laundry list of previously announced creators and companies that will debut programming on the platform. Here are a few:

Why It’s Going To Be Big

All of these elements add up to the platform that launches today in beta. Initially, access to the site will require an invitation, though it will soon roll out for all viewers. Vessel’s creator base, though, will remain exclusive, as Kilar and his team search for talented individuals who have the passionate fans needed to make use of Vessel’s most significant selling point.

Looking over all this information, it’s hard not to get excited about Vessel. The site’s philosophy is sound, its advertising model is both elegant and lucrative, and most importantly, it’s creator base is strong. The online video stars who have for years longed for an easier way to make money are excited about Vessel’s prospects, and that is a meaningful endorsement.

Due to this creator base, it is easy to brand Vessel as a “YouTube competitor” that will look to challenge the world’s most popular video sharing site. YouTube certainly sees Vessel as a viable threat, as it has reportedly cut checks for some of its biggest stars in order to prevent them from taking advantage of Vessel’s exclusive windows.

Kilar, however, doesn’t see his site as a YouTube competitor. Instead, he believes it to be another piece of the online video puzzle, and in the same way movie theaters, Netflix, and HBO all screen the same films, he thinks both YouTube and Vessel can both serve the same creative community. To him, an increased number of services aimed at creators means larger profits for those creators, which in turn leads to bigger production budgets that attract even more fans.

To put it more succinctly, Kilar thinks the model of exclusive windowing is an inexorable tide in the online video community. While he doesn’t want to say Vessel’s success is inevitable, he has positioned his site to be a major player in the future of the web.

Plus, you probably shouldn’t bet against Kilar. When Hulu was an entertainment initiative without a name, the tech industry dubbed it Clown Co. and more or less stated how it was never going to work. Now the premium online video destination is generating annual revenues in the 10-figure range.

To request an invite for Vessel’s beta, submit your email address via the site’s homepage. More information is also available in a blog post authored by Kilar.