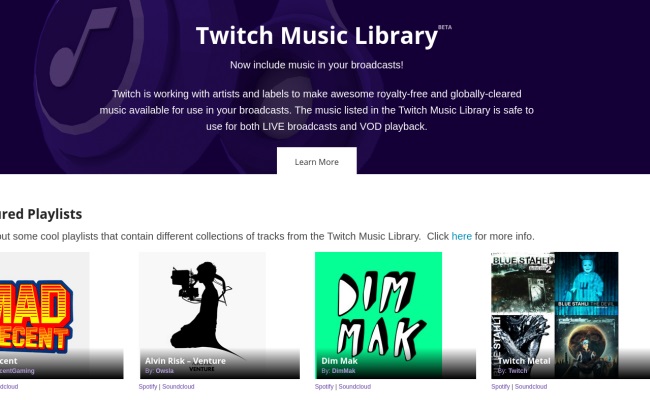 Twitch just set itself apart from its competitors with some interesting new developments. The live streaming site acquired by Amazon in August 2014 for $970 million has introduced two music-related initiatives its creators are sure to appreciate: the Twitch Music Library and a Music category.

In a blog post from January 15, 2015, Twitch discusses how its new Music Library contains a selection of songs pre-approved for live streaming on the site. Users can also add any song from the music library to their video-on-demand (aka past broadcasts) uploads. Twitch notes there are currently more than 500 titles available in the Music Library from labels like Mad Decent and Spinnin’ Records.

The addition of a certified, DMCA-compliant-free music library means Twitch users won’t have to worry about copyright infringement, a problem which plagues a lot of YouTubers (who don’t take advantage of that site’s free music library) on a regular basis. Twitch’s blog says it added an audio recognition program last year (similar to YouTube’s ContentID system) to help copyright holders protect their work. Now, the live streaming site wants to offer its users “safe passage through the less-than-clear legal landscape when it comes to audio rights.”

Twitch also announced the introduction of a new Music category. Currently in beta, the niche functions similarly to the recently-created Game Development category. Instead of selecting a game title and streaming gameplay footage, music creators will be able to use this new category to broadcast their own music sessions, performances, or recordings. 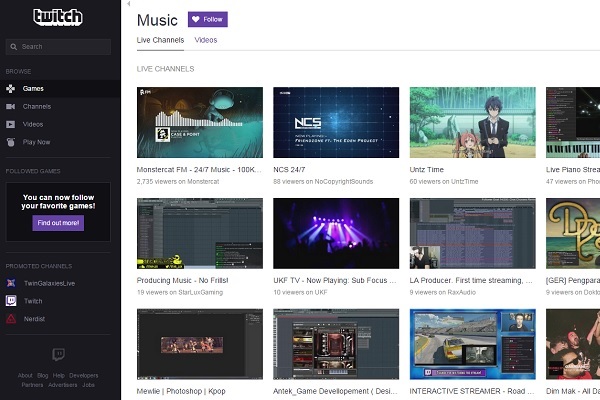 Twitch said this new category makes sense to add to the platform, considering lots of popular musicians like Deadmau5 and Steve Aoki already use the site to stream their gaming sessions. Twitch noted it’s working with the record label Monstercat to use the category as a “radio-style music player during their broadcasts.”

The company was also quick to warn creators the music they live stream through the music category must be their own, original compositions or performances. The previously-gaming-only live stream site said all music broadcasts will of course be subject to Twitch’s Terms of Service and Rules of Conduct, as well as DMCA guidelines. Basically, musicians must own the rights to the content they stream on their channel (and will have keep their clothes on while on camera).

Additionally, Twitch acknowledges how confusing it is to add so many new music initiatives considering the site’s massive gaming bent. Twitch claims to view music as an expansion of gaming, and that the latter will “always be our core focus.” The streaming platform promises to keep the directories, front page, and features all the same to make the introduction of the music library and Music category easier on all users.

If you’d like to read more about Twitch’s music initiatives, you can check out the frequently asked questions page the site put together in anticipation of the inquiries it knew it would receive.