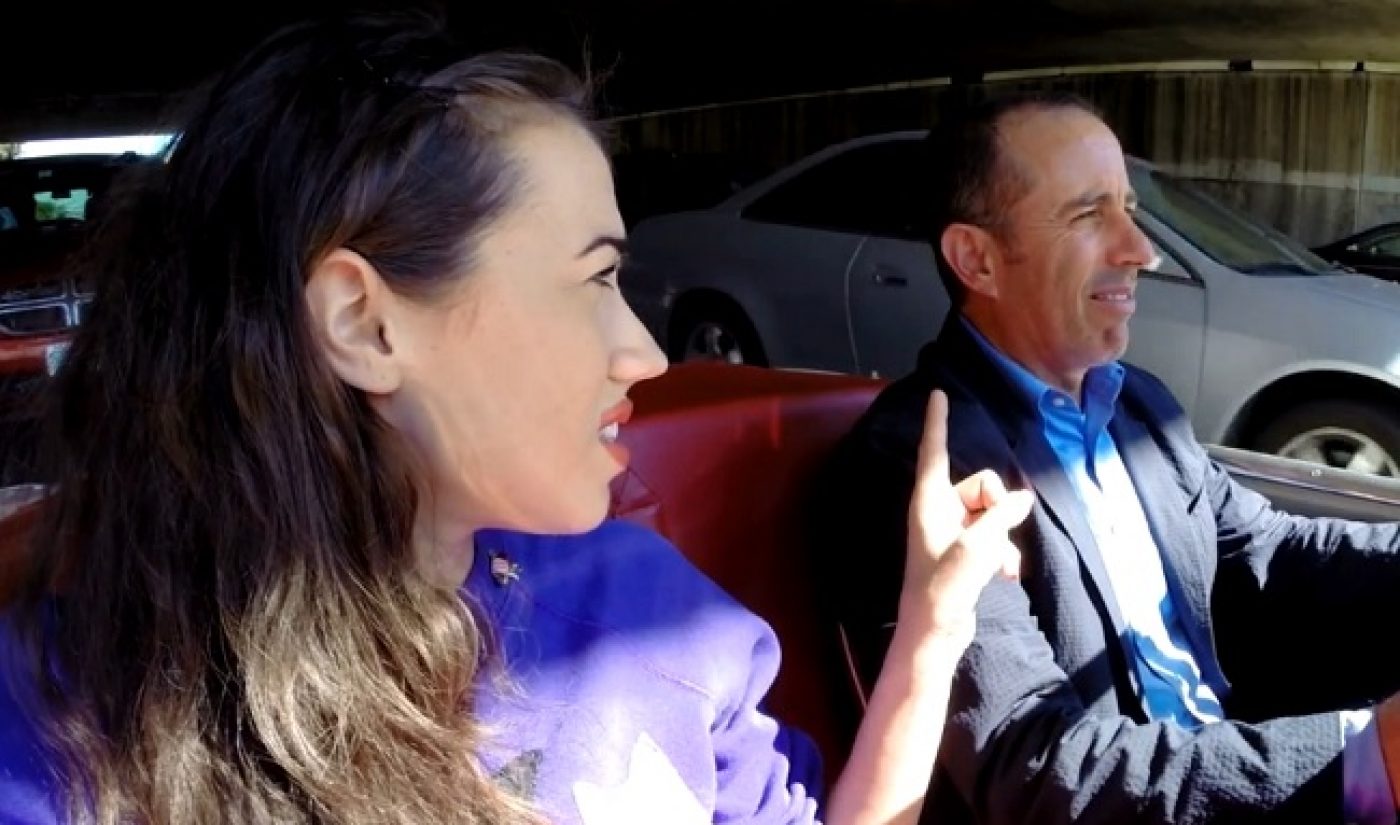 Jerry Seinfeld may think twice about asking famous YouTube comedians to appear on Comedians in Cars Getting Coffee (though not really). The most recent episode of his original Crackle web series, featuring the incredibly awkward YouTube personality Miranda Sings, debuted on November 27, 2014.

Miranda is the alter-ego of one Colleen Ballinger, and she is the first digital media star to sit across from Seinfeld and sip coffee in Comedians in Cars. One of the world’s most famous comedic personalities discovered Ballinger via his 13-year-old daughter, who is a big fan of the YouTube star and one of her more than 2.6 million subscribers. Seinfeld then announced in September 2014 he would introduce Miranda to the rest of America by having her as a guest on his show.

For the newest episode of the series, Ballinger plays her usual somewhat paranoid, kinda rude, and definitely nasal-y character Miranda. The moment Seinfeld picks her up at her apartment, she starts in on the verbal insults, comparing his 1960’s car to dinosaurs and accusing Seinfeld of trying to kill her when he goes over a speed bump. And their “meal” at a diner (which ironically contains no coffee thanks to Miranda’s refusal to order any) doesn’t go over much better.

Ballinger and Seinfeld talked to Vulture about how they prepared for the installment. “It was surreal for me because I grew up watching him. I’ve seen every episode of Seinfeld,” Ballinger said. “I was like, ‘He must just want me to promote it or something.’ I did not think he actually wanted me on the show. So when he called me and actually asked me to be on it, I was just over the moon. I was really excited because I’ve looked up to him my whole life.

Seinfeld noted how he met with Ballinger the night before to calm her nerves and help her realize “she could do this.” “We got together the night before at Jerry’s Deli in Studio City, and we just hung out and we had coffee,” he explained. “We just talked, and then we kicked around some ideas of what we could do. I wanted her to feel comfortable insulting me because I knew that would be funny if Miranda was hostile to me. I said, ‘I just want you to come on the show, take over, and completely treat me like garbage.’”

And treat him like garbage she does. Seinfeld noted how incredible the episode turned out because of the chemistry between the two comedians. “When you take away everything we did that didn’t work and you just leave what did work, it’s just amazing. You can’t believe it’s not scripted.”

Check out Miranda’s pre-Comedians promotional video below where she tries to teach Seinfeld and her viewers how to be famous. Then visit ComediansinCarsGettingCoffee.com to watch her harass Seinfeld even more and get frustrated about the extra gravy their waitress gives them with their turkey platter. You may even laugh enough to burn off some of those post-Thanksgiving calories.