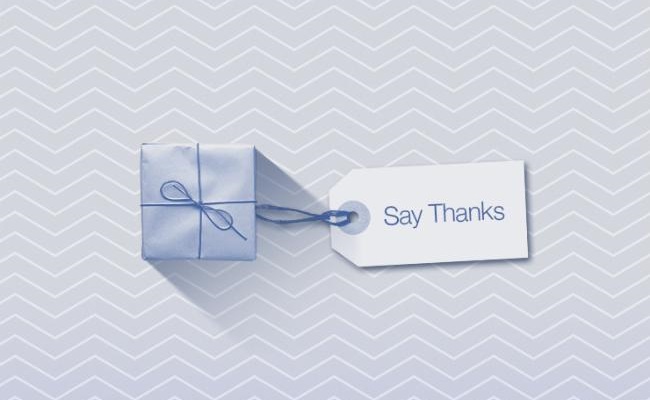 Just In Time For Thanksgiving, Facebook Invites Users To “Say Thanks”

Facebook has a new video tool, and it’s very fitting for the upcoming holiday season. The social media site launched its “Say Thanks” feature, which allows users to create and send thank-you videos to friends and family.

As with Facebook’s “Look Back” videos, which highlighted the site’s past ten years online, the “Say Thanks” feature encourages Facebook users to create a personalized video greeting to remember the good ol’ times they’ve had with specific friends or relatives. Users can select a recipient from their friends’ list, choose a video theme, and then insert pictures and wall posts related to the sender and recipient’s relationship.

Facebook then compiles everything into a preview, and lets users edit the videos before posting them to their timelines. While the videos automatically tag the friends or family members users select, privacy settings do allow users to select whether their entire network sees the video or just the intended recipient.

“Say Thanks” videos can be created via Facebook’s mobile and desktop versions in multiple languages (including English, German, Spanish, French, Italian, Turkish, Portuguese, and Indonesian). There’s also no limit to the amount of videos users can create and send. Mashable reports the tool will be around indefinitely.

The introduction of a mini-video creator to Facebook shouldn’t come as any surprise. The social media site has been ramping up its online video offerings for a while now, claiming its users have watched 1 billion videos per day since June 2014. Socialbakers also recently reported Facebook’s natively-uploaded videos get more interaction and shares than those on YouTube.

If you’d like to create your own “Say Thanks” for a friend or relative, visit facebook.com/thanks to try out the feature for yourself.