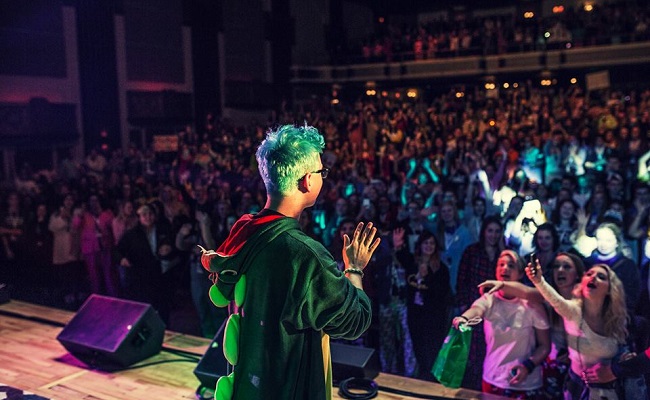 Get your pajamas ready, East Coast YouTube fans: Tyler Oakley is coming your way. The YouTube celebrity with over 5.7 million subscribers and counting has added seven new locations to his Tyler Oakley’s Slumber Party tour lineup.

Announced earlier this fall, Oakley’s tour initially started with just two dates and locations. The first was in Chicago on October 4, 2014, and the second in his home state of Michigan on October 5. Both shows sold out within 72 hours, so Oakley (seeing the massive appetite his fans have for in-person interactions) decided to add on another longer leg onto his Slumber Party. New destinations now include New York City, New York; New Brunswick, New Jersey; Providence, Rhode Island; Boston, Massachusetts; Glenside, Pennsylvania; Homestead, Pennsylvania; and Kalamazoo, Michigan.

For those wondering what Tyler Oakley’s Slumber Party entails, it’s pretty straightforward. As the name suggests, the vlogger clad in his own set of pajamas, conducting pranks, performing skits, and inviting fans on stage (who are hopefully in PJs, too, as he requested in an earlier video). The event is the first show produced by New York-based Mills Entertainment under its Fanatica banner, an initiative to create events for YouTube stars similar to the way Mills has done for reality TV celebrities (like the Cake Boss and Cesar Milan) in the past.

For an idea of what went down at Oakley’s tour, check out this video from YouTube user Melany Alicea who attended the Chicago show. Note, Oakley appears at roughly 3:20, accompanied by plenty of fan girl and guy screams.

The see-your-favorite-YouTuber-live trend didn’t start with Oakley. DigiTour, the live social media event featuring online creators, has been around since 2010 and received funds from Ryan Seacrest and Advance Publications. The show’s 2014 run (which Oakley took part in) sold more than 100,000 tickets worldwide. Additionally, Fullscreen conducted its own live event in September called INTOUR, featuring some of the MCN’s top creators. And conventions like VidCon and Playlist Live have been giving fans opportunities to meet and greet YouTuber stars (including Oakley) since 2010 and 2011 respectively.

Tickets for the seven added cities on Oakley’s tour go on sale on November 5, 2014, at tyleroakleytour.com. They range in price from $29-$49, but if you get online early enough, you may be able to snag a sweet VIP package (which includes a meet and greet with the star) starting at $85.