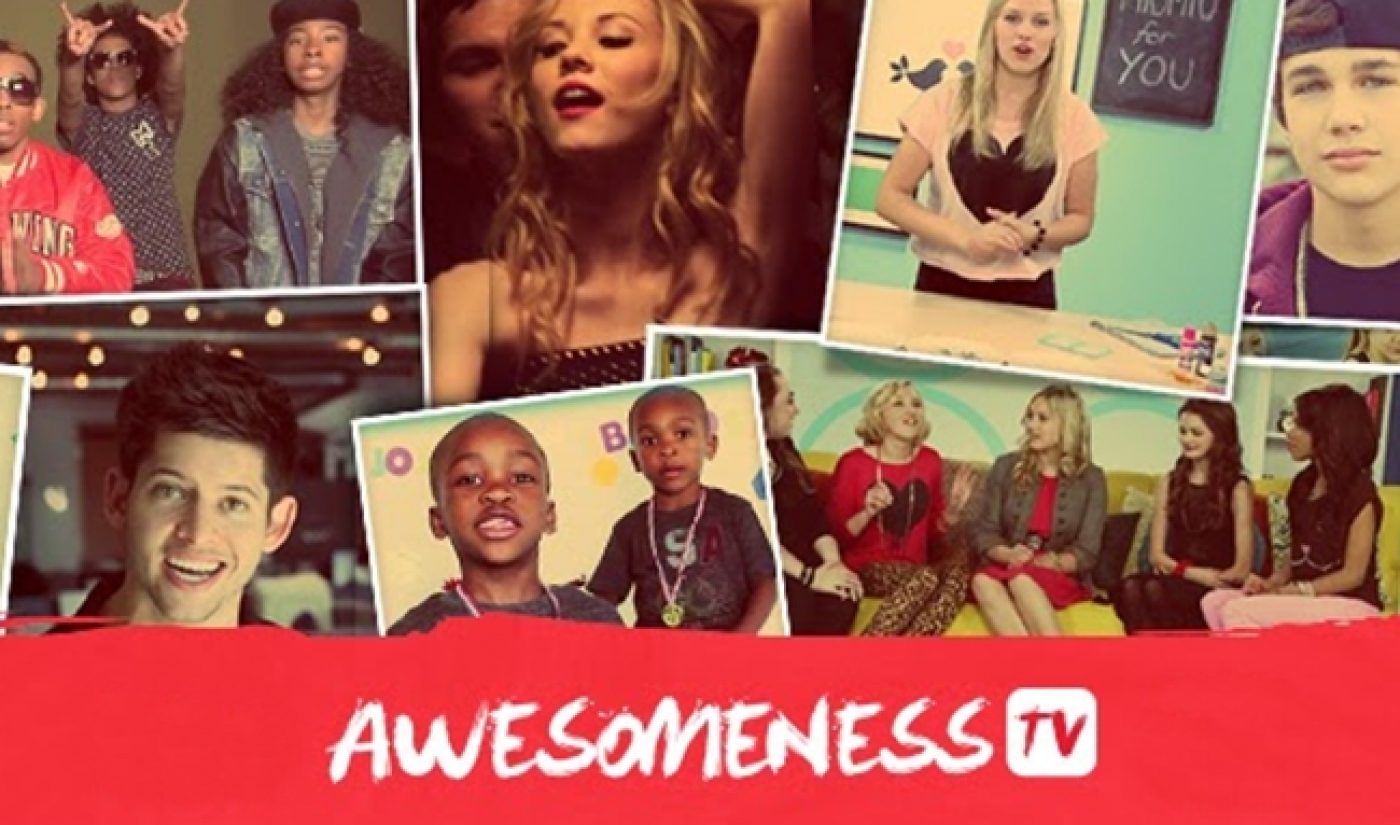 The Janome Sewing Machine Co.’s 2008 model TB-30 was ahead of it’s time. Its 30 actual stitches, six one-step buttonholes, built-in one-hand needle threader, and laundry list of other features weren’t what set this affordable prosumer tool for the budding fashionista apart from its contemporaries. It was its more superficial accessories.

The Janome TB-30 was perhaps the first physical consumer product endorsed, branded, marketed, and promoted by an online video entity.

Way back in August 2008, the still independent Next New Networks (which is now the Google-owned YouTube Next Lab) and its “Not Yo Mama’s DIY Channel” Threadbanger (which is still cranking out videos at its home on YouTube) partnered with one of the leading manufacturers of sewing machines worldwide to put their literal stamp of approval on a product and help sell it to their hip, online video savvy, and presumably younger-ish audience. This is the TB12. It’s a newer model than the 2008 version, but it’s the same basic concept and looks way cooler.

Yes, early-and-mid-to-late 2000s online video powerhouses like Happy Tree Friends and Homestar Runner sold their own branded plush toys, action figures, apparel, pencils, and other such items for the kids those days, but never before the Threadbanger and Janome deal had a person, place, or thing made popular by way of online video collaborated with a manufacturer or a retailer in this capacity to make and release a licensed product.

It was a novelty back in 2008. It’s more common now in 2014. AwesomenessTV is hoping in the very near future to make it the norm.

The YouTube multi-channel-network that’s now a multi-hyphenate with an MCN, management company, record label, and book imprint all under its umbrella recently launched a Consumer Products and Creator Licensing Division with Jim Fielding at the helm. The new division will work closely with creators within and outside of the AwesomenessTV network to create, explore, and assess the growing number of retail opportunities afforded to online video talent in command of actionable audiences. To be clear, this type of offering to top-tier talent in the online video space isn’t a new idea. By way of their multi-channel networks, managers, agents, lawyers, family members, and/or other professional confidants several YouTube and social media superstars have made their shows or themselves into burgeoning retail empires.

YouTube beauty guru Michelle Phan, for instance, has her own makeup line with L’Oreal, a monthly subscription “Glam Bag”, and a soon-to-launch mini-YouTube network (all of which she discusses on programs like Today and Bloomberg News). Young YouTube fashion star Bethany Mota has her own clothing line in Aeropostale (of which ET took notice). British YouTube beauty and fashion icon Zoe Sugg recently released her own beauty range that includes fragranced bath fizzer, body lotion, shower cream, scented candles, and other such bath and body accoutrements. Annoying Orange has been in Toy “R” Us, JCPenny, and the candy aisles of convenience stores for years. And a handful of other prominent YouTube personalities have produced or been a part of similarly branded consumer products.

But AwesomenessTV’s new initiative and approach to retail is different. It’s unlike the instances above and the activities of the company’s potential competitors in the digital media industry in two ways.

Before joining the team at AwesomenessTV in April 2014, he had a two-year stint as CEO of Claire’s, the accessory and jewelry retailers with over 3,400 locations worldwide. And before Claire’s, Fielding spent four years at Disney, where he served as President of Disney Stores Worldwide and told me his greatest takeaway was learning “the importance of storytelling and putting a huge emphasis on celebrating and elevating talent.”

Second, AwesomenessTV is ostensibly putting more thought, resources, and human capital behind its Consumer Products and Creator Licensing division than anyone else in the industry.

“Talented managers and agents may have handled these types of deals in the past, and there are certainly a lot of talented and capable ones, but we’ve built an 18-person team that’s really unique,” Fielding said. “I have a Fashion Design Group. We have category managers and a Legal and Business Affairs team. We have a Direct-to-Consumer Division that’s managing our pop-up store and ecommerce work. We really offer a comprehensive solution to our creators.”

“We’re working proactively to build their brand and product strategies and take it into the consumer products world, rather than work in a reactive way, waiting for the phone to ring or a deal to be represented,” Fielding said. “That’s not to say there are no great inbound opportunities. Our talent is being presented offers all the time. What’s great is that we’ve built with them and put in place a real clear roadmap, and we can evaluate those inbound deals against that strategy.”

Savvy online video viewers will note all the names listed above are currently part of the Big Frame or AwesomenessTV networks, but Fielding is confident he and his team’s work and expertise will appeal to talent outside of his own organization. “The deals we sign with talent are totally separate from their management agreements and MCN deals,” he explained. “Right now we’re in active negotiations with upwards of 20 creators, both from within and outside of AwesomenessTV MCN.”

Fielding wouldn’t reveal any names of the creators with which he’s currently in some stage of negotiation, nor would he disclose any of the deals he’s working on with the creators who have already come on board. Some hints to what branded products consumers may see online or in stores may come this holiday season, when AwesomenessTV opens up a retail pop-up shop in Los Angeles, California.

“[AwesomenessTV Founder and CEO] Brian Robbins has a magical vision of where he wants to take the company,” Fielding said towards the end of our interview. “Really, we’re just trying to keep up with him and, of course, the creators. We see ourselves as a service provider for the creators. And everything we do for them they have 100% approval over and a 100% ownership.”

That’s not such a bad deal on paper. Now AwesomenessTV just has to see if more creators, retailers, and especially consumers buy into the offering.