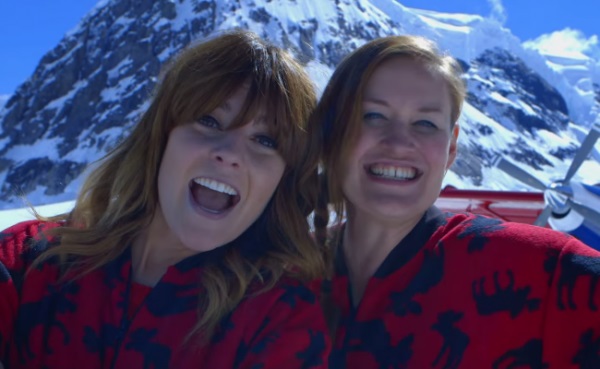 HeyUSA Episodes To Be Released Exclusively On CNE’s The Scene

The lovable and ever-interesting duo of Mamrie Hart and Grace Helbig are back for more antics. HeyUSA, their travel series show created by Astronauts Wanted, is set to debut exclusive, full-length episodes on Condé Nast Entertainment’s recently launched online video destination The Scene on October 15, 2014.

“HeyUSA is a perfect example of the type of engaging, premium programming that will find a home on THE SCENE and resonate with our audience of influential millennials,” said Whitney Howard, Senior Vice President of Business Development and Strategy for CNÉ, in the release. “We’re excited to partner with Astronauts Wanted to give Grace and Mamrie’s fans access to their adventures.”

HeyUSA took a cue from these fans on social media to determine where the two would travel to over this past summer and what activities in which they’d be engaged be doing in each location. Unlike traditional media, where behind-the-scenes production clips and bloopers are revealed only on the DVD extras, Astronauts Wanted revealed a lot of making-of content on their YouTube channel in real time. This strategy helped build anticipation for the show and is priming Hart and Helbig’s massive fan bases (in aggregate they have over 2.3 million YouTube subscribers) for the actual series premiere.

“The Internet is an extremely personal medium and we got to take the concept of having a two way conversation with our audience to the next level,” Helbig noted in the release. “We spent our summer living out the most adventurous social media experiment I’ve ever been a part of and I’m excited and interested to see how it will continue to shape the relationship we have with our audience.”

Episodes of HeyUSA on The Scene will be around 15 minutes long and feature new footage in addition to the scenes already revealed by Astronauts Wanted. Hart and Helbig’s fans and followers will finally be able to see what happened beyond the sneak peeks they got this summer.