26% Of Let’s Players With 5,000+ Subscribers Cut Deals With Publishers 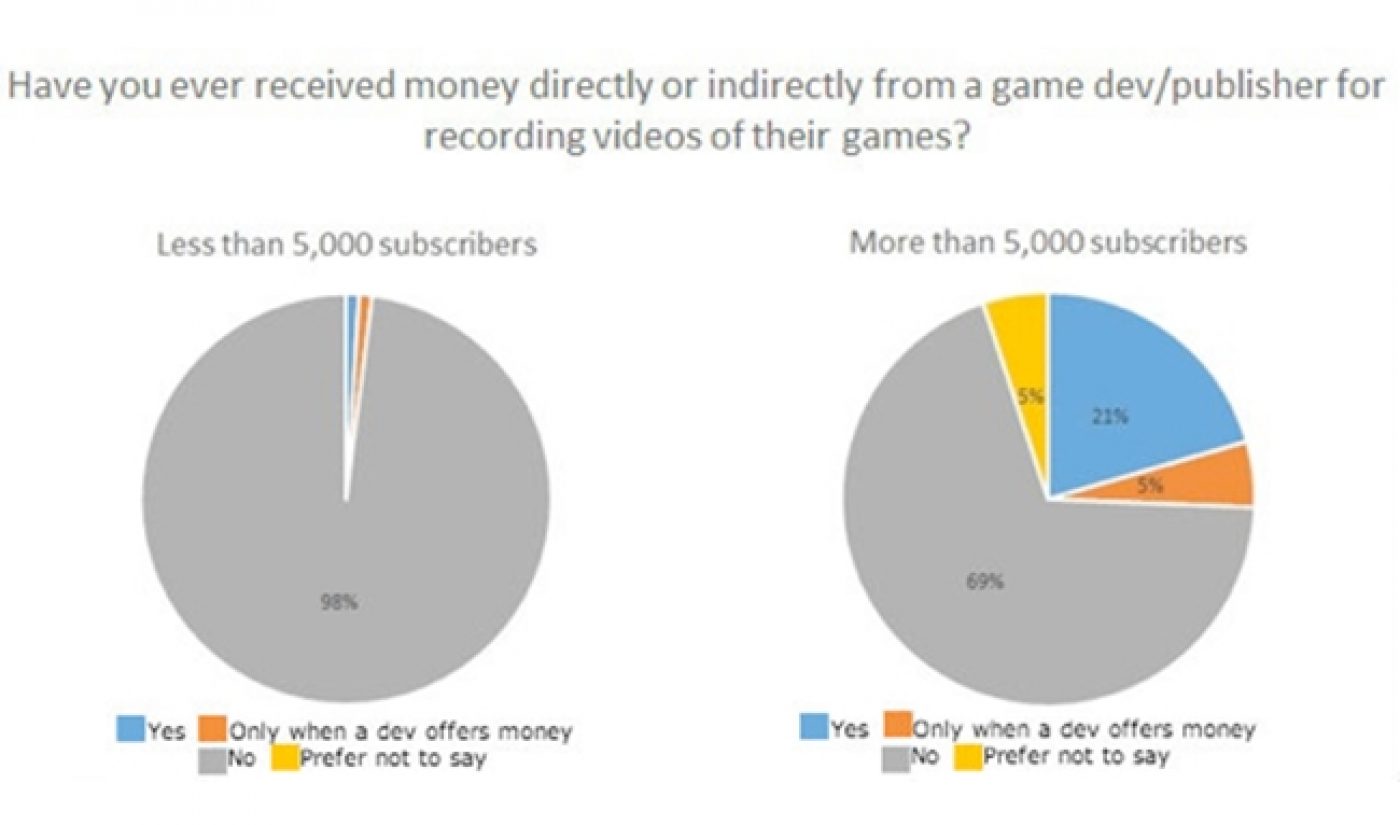 It’s no secret that YouTube content creators who make ‘Let’s Play‘ videos are often paid to play certain games. With their rich commentaries, long videos, and big fanbases, “Let’s Players” can serve as efficient mouthpieces for games that would otherwise fly under the radar.

A new study from Gamasutra has dived into this trend. The publication surveyed 141 YouTubers and asked them if they take money from video game publishers. While the majority of respondents answered no, 21% said yes, with another 5% claimed they only take money when publishers offer it. For creators with fewer than 5,000 subscribers, the result was less dramatic: 98% do not take money from publishers.

Gamasutra’s report includes several snippets from anonymous YouTubers, whose opinions varied greatly. Some believe YouTubers deserve to be paid for all the free PR their provide for developers. We — video creators — live in complicated times,” said one respondent. “It is expected from our work to be free. Copyright holders don’t want us to monetize, no one likes ads, no one likes paid content — but we invest our free time into covering the games we love and want to share, basically giving free PR for the game itself. If a YouTuber asks for money for delivering great content, it’s not wrong — it’s compensation.”

Other YouTubers, however, believe that Let’s Players don’t deserve any special treatment, especially when they disguise paid content as unbiased coverage of the games they play. “The dev has usually worked hard and sacrificed a lot for years to get their game finished and released,” answered one respondent. “It rubs me the wrong way that some people step in and want a share of it just because they think they can.”

This negative viewpoint is similar to the one developer Phil Fish took when he spoke out against YouTube’s Let’s Play community. Fish, the developer of indie darling Fez, is infamous for his vitriolic takes on, well, pretty much everything, and his opinions about Let’s Players are no different. “YouTubers should have to pay out a huge portion of their revenue to the developers from which they steal all their content,” he said. “[Ad] revenue should be shared with developers. This should be built into YouTube. Anything else is basically piracy.”

As they often do, Fish’s comments drew plenty of backlash, but they also opened up a conversation about what Let’s Players “deserve”. Some people see Let’s Play videos as a natural extension of advertising, one that should be compensated as such. Others, such as Nintendo, believe that YouTube ad revenue is something to be shared. On the far end of the spectrum is Fish and his venomous invective against the group he sees as pirates.

No matter where you stand on this issue, the bottom line is that making money on YouTube is really hard, and no one should blame Let’s Players for doing whatever they can to make a living off their videos. As the Let’s Play community grows in strength and popularity (which, as evidenced by surging channels like PewDiePie and Mr. Stampy Cat, it is), we should expect more YouTube content creators to demand payment for the PR they provide. As long as these YouTubers are upfront about the payments they receive, this won’t be a problem. Instead, it will become common practice, whether Phil Fish likes it or not.