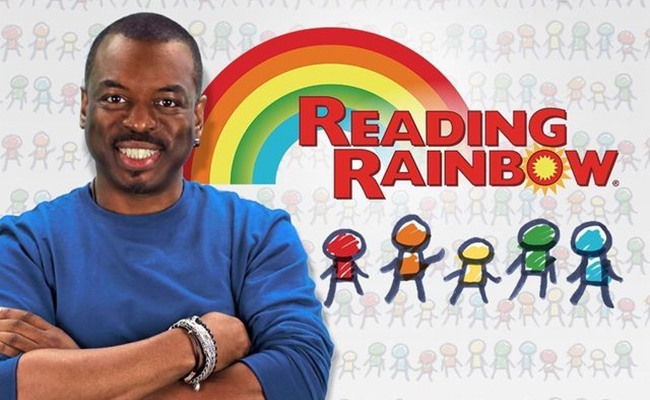 The latest big-name celebrity looking to raise seven-digit funding on the Internet is Levar Burton. The actor has taken to Kickstarter to raise $1,000,000 for an expansion of Reading Rainbow that will bring the classic educational program–when went off the air in 2009–to the web.

In his pitch video, Burton explains that he wants to bring Reading Rainbow to the web, where it can help today’s youngsters learn to love reading. Back in the 80s, TV was the easiest place to reach children, but today, the kids have migrated online. Reading Rainbow has already launched a mobile app featuring e-books and “video field trips,” but Burton wants low-income schools without mobile devices to experience the same great content. To that end, the Kickstarter campaign will create a web-based version of the app.

The campaign is off to an extremely fast start. The children who grew up with Reading Rainbow in the 80s and 90s are now adults, and they have plenty of disposable income to hand over to one of their childhood icons. In just the first day of the campaign, it has raised $942,194 (at the time of this post) and counting.

Since Reading Rainbow holds a cherished position in many Americans’ hearts, you may think it would be immune to the criticism that has been lobbed at other high-profile Kickstarter campaigns. However, a column in the Washington Post has pointed out some issues with the Kickstarter project. Author Caitlin Dewey explains that the show was cancelled because it wasn’t thought of as the best way to educate children about reading. In addition, she notes that the web-based edition of Reading Rainbow will not be a return of the old TV show, but rather a for-profit platform that will require subscriptions from most of its users. Dewey concludes that the Reading Rainbow campaign falls into the same category as many of the site’s other high-profile projects:

“All this adds up to a criticism that has been levied at high-profile Kickstarter campaigns before: Crowdfunding is theoretically supposed to bolster charities, start-ups, independent artists, small-business owners  and other projects that actually need the financial support of the masses to succeed. It’s not supposed to be co-opted by companies with profit motives and private investors of their own … which, despite Burton’s charisma, is exactly what the Rainbow reboot is.”

It’s a valid point, but there are still many people who grew up on Reading Rainbow and would like to pass that experience on to the next generation. But you don’t have to take my word for it–the campaign’s massive number of donors speak for themselves.