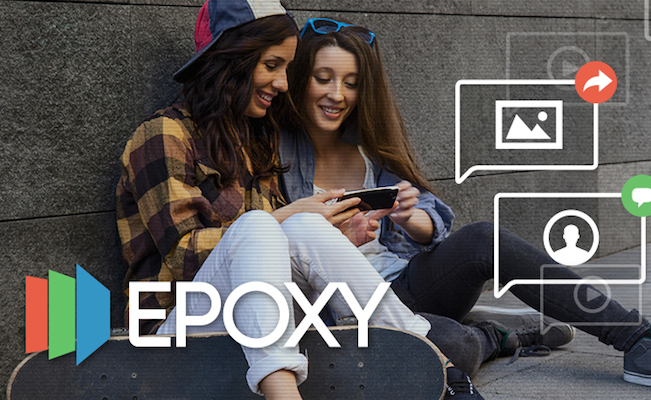 YouTube and its one billion monthly users, 100 hours’ worth of video uploads per minute, and over one million partnered channels has spawned an ecosystem of applications, tools, and products specifically designed to help creators, brands, and publishers interpret, navigate, and exploit the ever-evolving online video landscape. There are video marketing platforms, social media listening tools, big data analytics engines, and a host of other software services designed to help YouTubers big and small make the most of their online video offerings.

Conceived of by CEO Juan Bruce (who was previously at Robert Downey Jr.’s entertainment company, Team Downey before founding its accompanying digital media investment vehicle, Downey Ventures) and CPO Jason Ahmad (who previously founded and exited from his own financial software startup, Proto), Epoxy is meant to make it very easy for YouTube creators to take advantage of their followings on other social media sites and streamline their video sharing processes. 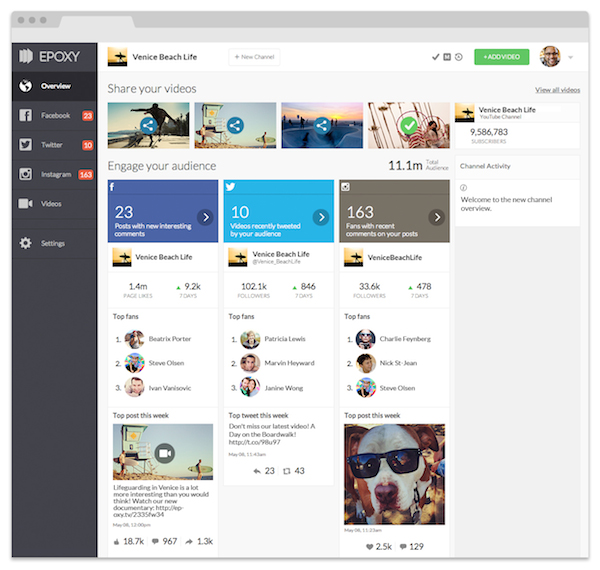 “We interviewed and shadowed the operations of dozens and dozens of YouTubers and teams on the digital sides of traditional entrainment companies, brands, and agencies to figure out their operations in terms of online video,” Bruce explained on the phone. “We jumped in and started building something that could support the social activities in which YouTubers naturally engage, and make those social actions more efficient and more powerful. Meanwhile, we built the product as intuitive as possible for traditional entertainment companies and created a toolset so every user could be as fast and nimble as possible.”

Epoxy’s offering currently incorporates the social media sites Facebook, Twitter, and (by way of a clever workaround) Instagram and breaks down into three main categories of support: sharing, engagement, and understanding.

In terms of sharing, Epoxy ingests all of your YouTube videos and then gives you the ability to distribute them to other social media sites. Sure, that’s easy enough for you to do on your own, but Epoxy streamlines the process by making the sharing all possible from a central location and it wraps your content within a special application custom tailored for each social media site.

When you share a YouTube video via Epoxy on Facebook, for instance, Epoxy will wrap the YouTube video in an app that will only show videos from your channel. So, when the viewer is done watching the selected video, all the suggested videos that appear are from your channel (and not whatever YouTube normally algorithmically decides). “This feature that replaces the traditional YouTube end card with your own player has accounted for about a 54% follow-on view rate,” Ahmad noted during our call. “So, for every 1,000 views your YouTube video gets on Facebook, you’re on average going to see an extra 500 views.” And yes, your YouTube view counts and advertising preferences still stay intact when using Epoxy’s video apps. 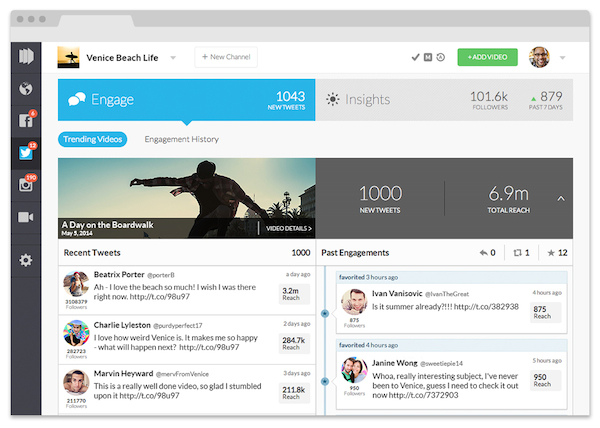 When it comes to engagement, Epoxy surfaces the latest and most meaningful conversations about your videos and gives you an easy interface by which you can quickly engage. On Twitter, for instance, Epoxy will surface all the conversations surrounding your videos, even the ones that don’t include your @ handle or a predefined hashtag. “Under 20% of tweets mention the @ handle of a creator around a video,” said Ahmad. “That means there’s 80% of the conversation you’re missing. We make it really simple for people to check in once or twice a day and get to those very high value conversations they otherwise wouldn’t even know were taking place.”

And in regards to understanding, Epoxy makes it clear that it’s not an analytics tool. “The majority of people just want to know what they should be doing and if their strategy is working,” said Bruce. With that in mind, Epoxy doesn’t bombard users with multiple graphs and data interpretations (the dashboard currently only contains one chart, which Bruce and Ahman may soon remove), but aims to display the simple what, when, and how of your social media activity.

After a beta testing period with several partners that lasted for the past few months, Epoxy.tv is officially open for business starting Tuesday, May 20. The subscription based service starts at $19.99 for its Essentials plan and goes up to $109.99 per month and higher for Professional and Enterprise solutions.

Bruce and Ahmad wouldn’t reveal how many users the company has so far (or how many they hope to get in the coming months), but with $2 million in funding from investors including Upfront Ventures, Greycroft Partners, Machinima chairman Allen DeBevoise, Maker Studios chairman Ynon Kreiz, Shine Group’s VP of Digital Yoel Flhor, and more, it won’t come as a surprise if Epoxy onboards a LOT of channels partnered with some of YouTube’s biggest multi-channel networks in the very near future.