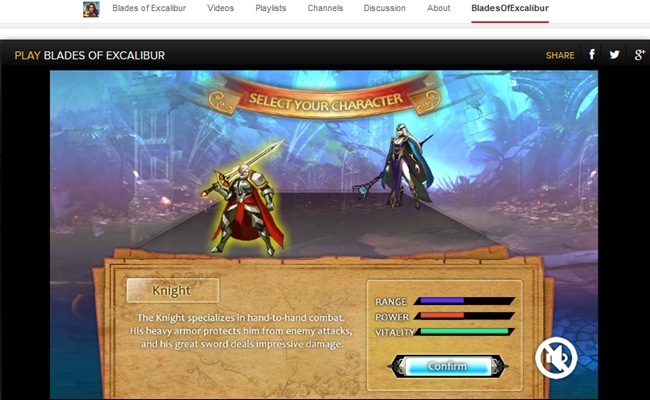 Gaming is the most popular video category on YouTube, and at least one developer has decided to fully integrate a game within the YouTube platform. Kabam, a developer that specializes in multiplayer, web-based flash games like Realm of the Mad God, has made a demo of its upcoming game Blades of Excalibur available on YouTube.

Blades of Excalibur, which will make its debut on the web next month, is a localized version of Three Kingdoms Action, which was one of the most popular games in China last year. While the full version of the game won’t be available in the US for another month, Kabam is offering a preview on YouTube, where a tab on the game’s official channel presents a fully-functional demo.

Kabam’s decision to use YouTube as a gaming platform takes advantage of the popularity of video game previews on the site. Videos that showcase gameplay of unreleased titles often draw millions of views, and Kabam is buttressing its own gameplay previews by giving viewers an opportunity to test drive the game themselves. More engaged viewers leads to more hype, which leads to more players once the game is released, which leads to more in-game micro-transactions, which cost real money and turn a profit for Kabam.

Several YouTube creators (including The Fine Bros) have created “choose your own adventure”-style games that are playable through annotations, but Blades of Excalibur demonstrates that YouTube has game hosting capabilities beyond the ingenuity of resourceful creators. We may not see entire games making their way to the world’s largest online video sharing site, but for developers who want to give the world of a small taste of their work, YouTube could prove a valuable resource.