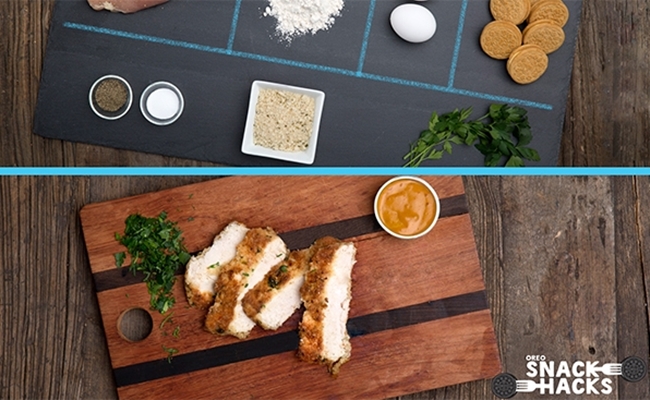 Oreo Reinvents The Cookie With A Web Series Of ‘Snack Hacks’

Oreo has released a web series that takes the sandwich cookie on gustatory adventures. In a series of Snack Hacks, renowned chefs teach viewers how to use Oreos for unusual culinary mash-ups.

Snack Hacks does well to connect the Oreo to its fans on social media. The entire series is inspired by a single viral image, in which a resourceful eater showed how to use a fork to prevent your fingers from becoming littered with Oreo dust. More broadly, Snack Hacks is a perfect fit for the YouTube audience, which usually prefers cooking shows that feature offbeat, indulgent eats. “We look at our social content really as a way to connect with our fans,” said Kristin Hanjinlian, Oreo brand manager at Mondelez International. “We’re always looking for things they are most interested in.”

Even if Oreo-breaded chicken cutlets aren’t your thing, Snack Hacks will succeed in making any sweet-toothed viewer hungry for sandwich cookies. For the more adventurous, Snack Hacks, Oreo has taken midnight snacking game to the next level. Your move, Epic Meal Time.