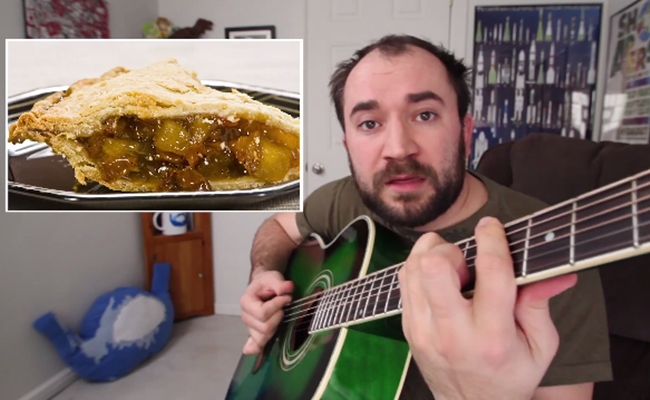 Outside of May the Fourth, there’s no nerdier holiday than Pi Day, which goes down every year on March 14th. The geeks of YouTube have come out in full force, unleashing a steady stream of videos celebrating the famous irrational number. Here are our seven favorites:

Though it is ostensibly a celebration of math, Pi Day has become another excuse to stuff our faces full of food. This video takes things to the next level by teaching viewers how to emblazon the pi symbol onto a pie pan.

6. The Pi Episode: Math Bites with Danica McKellar by Nerdist

Danica McKellar’s math web series kicked off with a star-studded celebration of 3.14. On Pi Day, it is time to revisit it.

5. How Well Do You Know Pi? by PBS NewsHour

This segment makes viewers feel smart than the people on the street who can’t name a single digit of pi. It then makes them feel inferior to those overachieving nerds who memorized it to dozens of places.

When she isn’t busy hanging out with The Muppets, Rosanna Pansino uses her Nerdy Nummies cooking show for tiny pi pops. She gets bonus points for making something more interesting than a basic pie while still maintaining appropriate circularity.

Wheezy Waiter delivered the best of several Pi Day parodies of Rebecca Black’s ‘Friday’. He might have claimed the top shot if he had chosen to pronounce “pecan” like “pee-can”, which would have rhymed with Black’s unusual delivery of the word “weekend”.

Vihart is one of the most popular mathematicians on YouTube, and she’s not happy about the attention pi has received relative to other irrational numbers. I would contend that other numbers haven’t become as popular because they can’t be used as an excuse to cook up delicious desserts.

The Numberphile channel has given us some of the most exciting pi-related videos on YouTube, and its 2014 effort is a stunning progressive rock song based off the digits of pi. It’s impressive, educational, and a reminder that prog rock eggheads are the nerdiest class of musicians.

How are you celebrating Pi Day? Let us known in the comments, and be sure to read all previous Countdowns here.